Vice-Chancellor, by the authority of the Senate, I present to you this person, on whom the Senate desires you to confer the honorary degree of Doctor of Letters, Alison Louise Kennedy.

A.L. Kennedy is a writer whose stories, poems, non-fiction and novels, make her pre-eminent among her contemporaries. 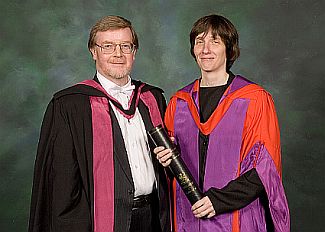 She has turned restlessly from the dream-like revelations of the novel So I Am Glad to the hard-edged World War II realities of her latest book, Day, from the frightening love stories of Indelible Acts to the ruthlessly personal description of her encounter with mortality in On Bullfighting. In that work, she evokes the great Spanish writer Lorca and the concept of duende, the idea that at the heart of all art that matters, there are dark sounds, there is a wound, a wound that can never heal, but whose pain is an eternal creative source of the work of artists.

Vice-Chancellor, in a time where the arts are so often, so easily trivialized, Alison Kennedy reminds us how seriously we must value them, in order to learn, to live and to want better. Her longest novel, entitled Everything You Need, begins with the words, ‘Things could be worse’ – recollecting Milton’s Devil, cast down from heaven: ‘All is not lost,’ as Satan said.

Kennedy’s writing is clear and sharp and enjoyed by readers the world over. Her central concerns present us with a determined fathoming of emotions and an exact charting of the currents of human relationships. It is timely to celebrate her achievement and recognize the significance of her work.

Her first collection was Night Geometry and the Garscadden Trains — Garscadden being a railway station near Glasgow where an uncanny number of trains seem to ‘terminate’ after midnight. Most people, she writes in the title-story, ‘live their lives in the best way they can with generally good intentions and still leave nothing behind.’ Chat show hosts might get some proof of their own existence, but the silent majority have only one memorial, ‘The Disaster’: ‘We have small lives, easily lost in foreign droughts, or famines; the occasional incendiary incident, or a wall of pale faces, crushed against grill work, one Saturday afternoon in Spring. This is not enough.’

That’s a ringing endorsement of the value of human potential, and the work we try to do at the University should endorse that.

It is not always easy.

The national context holds universal truths. Kennedy summarises Scotland’s methods ‘for the perfection of children’ in her first novel Looking for the Possible Dance. The first points to remember are:

1.  Guilt is good.
2.  The history, language and culture of Scotland do not exist.
If they did, they would be of no importance and might as well
not.

Even today there are some people who would miss the satire!

It’s therefore a particular pleasure to record our gratitude to Alison for her occasional contributions to our teaching here in the Department of Scottish Literature, where her irony has been a poised and steely instrument in the dedicated service of the kind of self-extension to which human nature is healthily prone. In her teaching, as in all her writing, A.L. Kennedy helps us in what she has described as the quest for a ‘possible dance away from irrelevance and defeat’.

Her more recent work has carried that dance into unpredicted places. The novel Paradise is a terrifying story of yearning for love and alcohol. But she has also written brilliantly on the neglected British film of 1943, The Life and Death of Colonel Blimp. Absurdity and crazy humour are as handy in her repertoire as a sense of tragedy and real despair. She takes risks. Any serious novelist who has taken the stage at the Edinburgh Festival Fringe performing solo acts of stand-up comedy has a capacity for risk-taking that is surely wild. It gets my vote. And yet the novel Day, published earlier this year, is one of the most sobering – and deeply satisfying – accounts of the Second World War from the viewpoint of a gunner in a Lancaster bomber. There is no knowing where she will go next but the depth of her commitment is evident.

Of all contemporary English-language novelists, Alison Kennedy has perhaps dwelt most thoughtfully on all the resonant meanings in the words with which George Eliot closed Middlemarch: ‘for the growing good of the world is partly dependent on unhistoric acts; and that things are not so ill with you and me as they might have been, is half owing to the number who lived faithfully a hidden life, and rest in unvisited tombs’.

Things could be worse.

Vice-Chancellor, I invite you to confer the honorary degree of Doctor of Letters on Alison Kennedy.