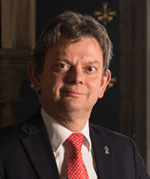 Professor Sir Anton Muscatelli has been Principal and Vice-Chancellor of the University of Glasgow since 2009. An economist, his research interests are monetary economics, central bank independence, fiscal policy, international finance and macroeconomics. From 2007-2009 he was Principal and Vice-Chancellor of Heriot-Watt University. Prior to 2007 he held various roles at the University of Glasgow including Vice-Principal - Strategy, Budgeting and Advancement (2004-07); Daniel Jack Professor of Political Economy (1994-2007); and Professor and Lecturer, Department of Economics (1984-94).

Sir Anton was Chair (2016-21) of the First Minister’s Standing Council on Europe, a non-political group providing expert advice to Scottish ministers on Scotland’s relationship with the EU. He was a member of the Scottish Government’s Council of Economic Advisers 2015-21, and subsequently advised them on the National Strategy for Economic Transformation. He is a member of the advisory group for Sir Paul Nurse’s Review of the UK’s Research, Development and Innovation Organisational Landscape. From 2017-20 he was Chair of the Russell Group of UK research-intensive universities. He has been a special adviser to the House of Commons Treasury Select Committee on fiscal and monetary policy, and he has advised the European Commission and the World Bank. He holds an honorary degree from McGill University in Canada.