It is with immense sadness and sense of loss that I have to announce the passing of Sir William Kerr Fraser, who died late on Wednesday, 12 September 2018.

By any measure, Sir William was a remarkable man and a tremendous servant of this University.

Sir William, a graduate of Glasgow, MA LLB, served with distinction in the RAF before entering the Civil Service in 1955. Rising through the ranks and serving in a number of posts, he reached the pinnacle of the profession, becoming Permanent Under-Secretary of State, Scottish Office, in 1978, remaining in that role until 1988. 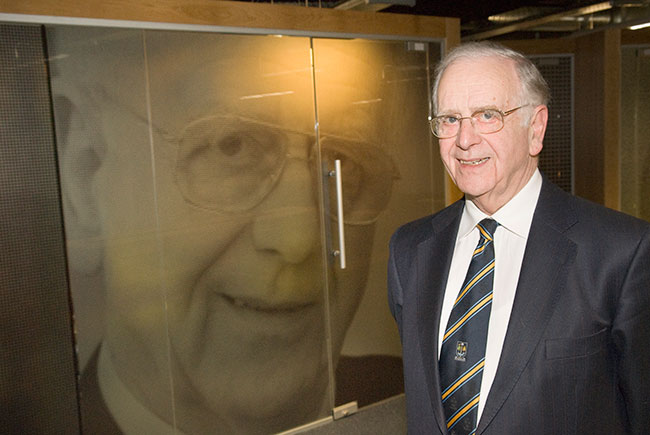 He was appointed Vice Chancellor and Principal of the University of Glasgow in 1988. While a student, he had already experienced the stresses and strains, and, of course, the opportunities of leadership roles in a University as President of the SRC. In becoming Principal, he had to steer the University through a period of challenge and change which included reductions in government funding and calls for Universities to show greater accountability for their teaching and research.

At Glasgow, this led to the formation of a Management Group chaired by Sir William and the reorganisation of cognate academic and administrative departments into Planning Units. In many respects, so many of the issues familiar to the University today, including research selectivity exercises, teaching quality assessment, accountability to funding bodies and open competition for funds for research and innovation in learning, began at this time. Under Sir William, Glasgow more than rose to meet the challenges of this new era in the ways universities were expected to be run and perform.

Without doubt, negotiating pathways and thriving through this time of pressure and transformation would not have been possible without Sir William’s leadership and personal qualities. A man of immense integrity, sense of duty, commitment to inclusive and consensual decision-making, he was trusted and commanded respect across the University community. Above all else, at heart, he was driven by an immense sense of affection and loyalty to the University.

This never diminished and was again evident for all to see when he became Chancellor of the University in 1996, a role he held with his customary grace and modesty until 2006.

Sir William’s affection for Glasgow was shared in equal measure by his wife, companion and co-worker, Lady Marion Fraser, KT, who died in 25 December 2016. Throughout his time as Principal and Chancellor she more than played her part, and together they were able to create that sense of a Glasgow community, a University family. When they came to the official naming ceremony for the Fraser building, they were visibly moved and proud of the fact that their Alma Mater was recognising them in this way, and spoke eloquently of the centrality and importance of students to the life of the University.

On a personal note, as an early career academic during Sir William’s time as Principal, I recall his immense respect for the traditions of this University, and his close interest in the work of each of our academic disciplines. I was also very fortunate to be able to turn to Sir William for advice since he retired as Chancellor of the University, drawing on his wisdom and extensive experience. I am also very grateful for his and Lady Marion’s unstinting and ever-present support during my time as Principal.

As we mourn his passing, we should also reflect on and celebrate a life of consummate public service and pay tribute to the debt the University of Glasgow owes to one of its greatest and most distinguished servants. He will be sorely missed. I know our thoughts are with his family at this time.

A memorial service will be held in the University Chapel on Saturday, 24 November, at 11am.