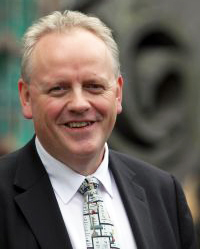 Professor Paul Younger, who held the University of Glasgow's Rankine Chair in the School of Engineering, has died peacefully at the age of 55.

Professor Younger was an internationally-renowned hydrogeologist and environmental engineer.

Latterly his academic focus had been on geothermal and other aspects of water-related renewable energy, and the elimination of pollution and carbon emissions in the energy sector. During the construction of the University’s district heating scheme in 2014/15, he was a member of the project board and championed the exploitation of the system as a teaching resource for engineering students.

Before joining the University of Glasgow, Professor Younger had been Newcastle University’s Pro-Vice-Chancellor for Engagement.

He arrived at Newcastle as a geology undergraduate. Paul worked his way up to become the university’s first Pro-Vice-Chancellor for Engagement until he was appointed Director of the Newcastle Institute for Research on Sustainability (NIReS).

Regarded as one of the world’s foremost experts in the remediation of pollution associated with mining, a highlight of his career was leading the research team which won Newcastle University its first Queen's Anniversary Prize for Higher Education in 2005.

The Principal and Vice-Chancellor of the University of Glasgow, Professor Sir Anton Muscatelli, has led the tributes here. He said: "Paul is sadly missed by many friends and colleagues at Glasgow. In addition to his transformative contribution to research and teaching within the School of Engineering as Rankine Chair, Paul threw himself with enormous goodwill and enthusiasm into all aspects of University life.

"As a Senate Assessor on the University Court, and a member of the Estates Committee, he made a significant contribution to the governance of the University, and his sound judgement was always valued by colleagues. He was also a member of the University’s Gaelic Committee, which was one small demonstration of Paul’s varied interests and passions. Indeed he was a talented linguist and a fluent speaker of both Gaelic and Spanish, as well as a fine singer and multi-instrumentalist. A leader in his discipline, an inspiring teacher, and a trusted friend, he is a tremendous loss to the University community."

Professor Muffy Calder, University of Glasgow Vice-Principal and Head of the College of Science and Engineering, said: "It is so sad to lose him. Paul was  in great demand as an expert and he engaged often with Scottish and UK  government, and with the public. He was on the Expert Scientific Panel Unconventional Oil and Gas, set up by Scottish Government and a co-author of the Royal Society and the Royal Academy of Engineering's influential report on Shale gas extraction in the UK.

"In 2015 he was the guest on BBC Radio 4's The Life Scientific, a recognition of what a truly remarkable man he was. Not only did he stand up and sing at his inaugural Rankine Chair lecture, but more recently when he became the secretary of the University of Glasgow Adam Smith club, he livened up proceedings by singing the minutes!"

John Marsh, Professor of Optoelectronic Systems and Transnational Education Dean, said: "I had the privilege of working with Paul for more than six years. I knew him as man of integrity and faith, a person of the highest stature in the academic and engineering communities, and as a friend. Paul moved to Glasgow to re-establish the University as a world-leader in energy technology, building with pride on the legacy of William Rankine in whose honour his Chair was named.

"Working with him was a delight, he was a true polymath, whose professional interests encompassed all the engineering disciplines and beyond, and whose personal interests included languages, music, and hill walking. Above all, his passion was for people, demonstrated by his love and care of individuals, his appreciation of diverse cultures, his sense of justice, and his determination that developments in technology should lead to a better society. His influence was felt around the world, particularly in South America and Africa where he had several major collaborations. He will be greatly missed."

Professor Chris Day, Vice-Chancellor and President of Newcastle University, said: “It is impossible to sum up Paul in a few sentences – he was a giant of a man in every way and his warmth, enthusiasm and fierce sense of justice permeated everything he did.

“Academically he was known and respected in his field by experts around the world, but it was in his role as ambassador for the University that I knew him best. I had the pleasure of working alongside him on the University’s Executive Board for many years and I enjoyed his intellect, his challenge, but above all, his passion for his subject, the University and the region. And this passion always came to the fore when he performed as Public Orator at the University’s graduation ceremonies and special events. Like me, Paul was a fellow proud Geordie but his influence was felt around the world and he will be greatly missed by many.”

You can watch the lecture in full here: