Computing science lecturer Matthew Barr has won an award in the 2018 Learning Technologist of the Year awards for his Gaming for Graduates project.

Dr Barr was given the inaugural Research Project of the Year award  by a panel chaired by panel chaired by Martin Weller, President of ALT and Professor of Educational Technology, Open University, in the 25th year of the ALT awards.

Established in 2007, the ALT Learning Technologist of the Year Awards celebrate and reward excellent practice and outstanding achievement in the learning technology field, and aim to promote intelligent use of Learning Technology on a national scale. The Awards are open to individuals and teams based anywhere in the world. 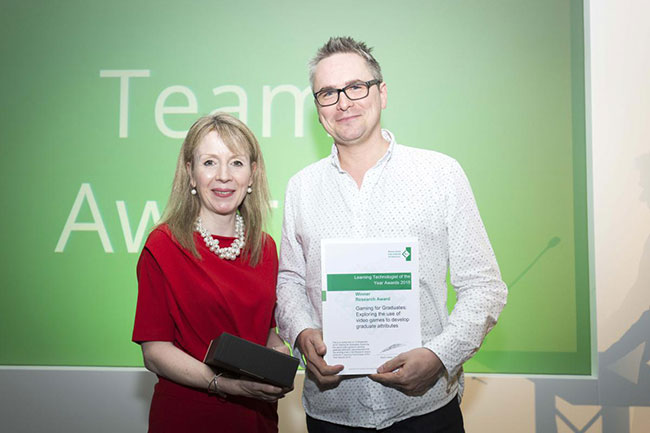 His Gaming for Graduates  project investigated the use of video games to develop sought-after "graduate attributes".

Dr Barr, lecturer in the School of Computing Science's Graduate Level Apprenticeship Programme, said: "These attributes are the skills and competencies that employers are said to look for in our graduates, and include communication skill, resourcefulness, and adaptability. The idea that video games may offer a means of developing useful skills isn’t new, but there’s little in the way of empirical evidence for the efficacy of using games in higher education."

He added: "Here, students played selected commercial video games over the course of a semester and any gains in attribute attainment were measured. The games comprised eight commercial titles including the team-based shooter 'Team Fortress 2', co-operative puzzle-solver 'Portal 2', and story-driven mystery 'Gone Home'. Emphasis was placed on games that involve collaboration and communication, while the range of games was intended to exercise students’ resourcefulness and adaptability by presenting an ever-changing variety of challenges. Intervention group students were invited to play the games in a lab on campus on a drop-in basis, logging two hours of play on most games (one hour on two shorter games) over approximately one semester."

The project was centred around a randomised controlled trial which used previously-validated instruments to quantitatively measure students’ attribute attainment on a pre/post-test basis. Differences in attainment between the intervention group that played the games and the control group that did not were then calculated. We also collected qualitative data via interviews with student participants, designed to measure attitudes to the game-based intervention. This approach was intended to help answer the questions of "if" and "why" students involved in the study felt they had gained something from playing the games.

"The randomised controlled design is relatively rare in game-based learning research, and the results were striking. Pre-/post-test results indicated significantly improved gains on the three measures (communication, adaptability and resourcefulness) for the game-playing intervention group versus the control, with differences of between 0.9 and 1.15 standard deviations in test scores. 95% confidence intervals calculated for the difference between mean scores for the control and intervention groups did not cross zero, supporting the idea that playing video games may be beneficial to students," added Dr Barr.