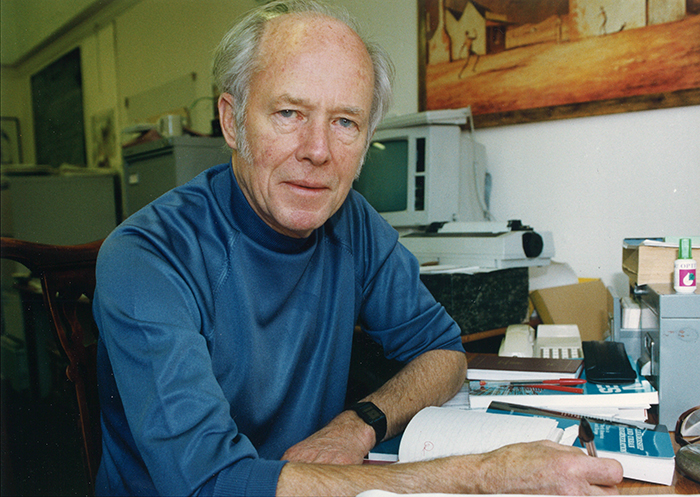 David Donnison was one of the most prominent figures in British social policy in the second half of the twentieth century.

His wide-ranging contributions as academic and author, first chair of the Social Policy Association, chair and member of public commissions, and sought-after adviser left a huge mark on public policy and debate in the fields of housing and town planning, education, health, social services and social security.

Most notably, he was a deeply committed egalitarian in deeds as well as words, who deplored the pain and loss of opportunity experienced by those suffering from continuing poverty in Britain. His work was always based on direct contact with the people whose lives he thought about and discussed. As he wrote himself, ‘To “target” resources at poverty-stricken groups, without first listening to what they have to say about their own situation – and giving them some power in deciding what shall be done about it – is likely to be fruitless’. And he insisted on seeing people’s lives as they see them themselves: as a whole, linking together aspects often treated as different academic specialisms.

David Vernon Donnison was born in Burma on 19 January 1926, the son of a British colonial administrator stationed there. He was educated at boarding schools from the age of eight, latterly at Marlborough College, before joining the Royal Navy aged 17.

He served as a sub-lieutenant on a cruiser in the North Atlantic, helping to return King Haakon to Norway at the end of his wartime exile, and then in the Pacific. In 1947 he went to Magdalen College, Oxford where he achieved a First in Philosophy, Politics and Economics. His first lectureship, from 1950, was at the University of Manchester where he had what he recalled as ‘a marvellous education, under a benevolent despot’, W. J. M. Mackenzie, later Professor of Government at the University of Glasgow. He went on to Toronto (1953-55) where he carried out the research for his book Welfare Services in a Canadian Community (1958), before moving to the London School of Economics as a Reader (1956) and then at the precocious age of 35 as full Professor (1961-69) alongside Richard Titmuss.

The distinguished group of social administration experts at LSE in the 1950s and 1960s – notably Titmuss, Brian Abel-Smith, Peter Townsend, Roy Parker, John Grieve and Tony Lynes as well as Donnison – with their profound commitment to eradicating poverty of income and opportunity, had a deep and lasting influence on the development and growth of Britain’s welfare state. David’s own work combined a new emphasis on survey data with a commitment to always talking with and trying to understand those being researched. The images of those he interviewed played as much of a role in his writing and presentation as the empirical patterns he established. This connection sharpened his sense of the politics and morality of the outcomes he observed and established a lifelong commitment to engage with, advise and advocate to politicians. A razor-sharp intellect,  a determination to persist, a real elegance in speaking and writing all made his obvious compassion more than warm words and, from the late 1950s, a basis of better action for Labour, and other, politicians into the 1980s.

He rapidly became known as an expert on housing, serving on the Milner Holland Royal Commission on Housing in Greater London (1965) and the Central Housing Advisory Committee and publishing Housing since the Rent Act (1961) and the standard work The Government of Housing (1967), later republished as Housing Policy, with Clare Ungerson (1982). His commitment to equality was shown by his service as Vice-Chair and then Chair of the Public Schools Commission appointed by Antony Crosland; he gave his name to its Second Report, on Independent Day Schools and Direct Grant Grammar Schools (1970). Drawing on the work which had led to The Neglected Child and the Social Services (1954), he also served on the Central Advisory Council for Education (England) which produced the milestone Plowden Report on Primary Education in 1967, and he chaired the poverty studies panel established by the then Social Science Research Council. In 1969 he moved to become Director of the Centre for Environmental Studies, established by Richard Crossman in 1966 as a pivotal gathering place for urban and environmental research, and stayed there until 1976.

David’s most prominent role was at the Supplementary Benefits Commission. He was first appointed, by Sir Keith Joseph, to succeed Titmuss as Deputy Chair in 1973 and by Barbara Castle as Chair in 1975. Typically, he accepted the chairmanship on condition that the Commission could publish an independent annual report on the problems it was dealing with. At the SBC until 1980, he promoted a change of culture, instituting seminars bringing together different interests within the organization and opening it up to outside influences and contributions. Drawing on his experiences with the SBC, he later published his memoirs and reflections on the difficulties of progressive policy change in social security in his book The Politics of Poverty (1982).

The SBC and CES were both quickly abolished after the advent of the Thatcher government in 1979; as he later commented, ‘Margaret Thatcher was not in the least interested in people like us’. David’s life moved further north as he returned to academia, as Professor of Town and Regional Planning at the University of Glasgow from 1980 to 1991.

David took to Glasgow, and Glasgow took to him. He later said that his SBC work had ‘necessitated contact with some of the poorest people in the country and it was a radicalising experience’ and his subsequent work showed a new emphasis on poverty and place. Renewal of neighbourhoods became a major area of interest, not least when he led the mid-term review of Glasgow’s GEAR project. More than any other UK city, Glasgow has developed models and programmes of neighbourhood change, primarily led by communities and social housing tenants. Whilst not neglecting ‘people’ causes, such as that of the single homeless, David became a change leader, across the OECD, in the UK, and in Glasgow in ideas about community-led change and tenant involvement and, working back to his original areas of academic interest in housing, did much to reshape models of provision in social housing that preserved the values of fairness and community embedded in the principles of the welfare state.

Within the University of Glasgow David was the initial Co-Director of the Scottish Housing Research Group (1982) that evolved into the UK’s national Centre for Housing Research and ultimately the Department of Urban Studies, recognised as one of the best housing and urban research centres in the world. David inspired his colleagues, was always engaged with them and drew no academic boundaries. He respected and promoted all the talents.

After his formal retirement David carried on working and writing, publishing Policies for a Just Society (1997), and Speaking to Power: Advocacy for Health and Social Care (2009), as well as reflections on his experience of Burma Last of the Guardians: A Story of Burma, Britain and a Family (2005), a volume of poems about the loss of his wife Kay, Requiem for Kay (2011), and a posthumous volume of Kay’s writings, It Takes a Lifetime to Become Yourself (2017).

David’s full, and fulfilled, life was a great, and gracious, journey from distant Empire to the closer embrace of communities in Glasgow and Argyll. If David’s head was at Gilmorehill, his heart was in the East End of the city, or wherever poverty prevailed. He was at home with the people and places that he analysed in his great flow of books, articles, broadcasts, speeches, seminars and conversations. He was never happier than when sharing views with community activists in places such as Easterhouse and Merrylee. But he was far from at ease with how these places and the people who lived in them had become left behind. In his polite, forceful, intelligent way he quietly raged against the processes and policies that had immiserated the lives of the many in enriching those of the few.

In retirement, David took up painting, drawing, writing poetry and playing the concertina in a ceilidh band. He windsurfed all of the major lochs in Scotland, and spent much of every year as part of the community at Easdale Island. He was awarded honorary doctorates by the universities of Bradford, Hull, Leeds and Southampton, but characteristically, he did not accept any state honours.

David married Jean Kidger, a fellow student at Oxford, in 1951 and they had two daughters Rachel and Polly, two sons Christopher and Harry and a foster son John. They separated in 1979. David’s marriage to his second wife, Kay Carmichael, his colleague on the Supplementary Benefits Commission, was in 1987. She died in 2009 and Jean in 2017, but he is survived by the children of his first marriage and six grandchildren, and by his step-daughter Sheena.