President of Malawi visits the University of Glasgow

His Excellency, Professor Peter Mutharika, President of the Republic of Malawi, visited the University on Monday on the first day of his four-day visit to Scotland as the guest of the Scottish Government.

Welcomed at the Principal’s Lodgings by the Principal, President Mutharika and the First Lady, Professor Gertrude Mutharika, were joined for lunch by Dr Alasdair Allen, Scottish Minister for International Development and Europe, and a number of representatives of the Malawi Government, the Scottish Government and the University. 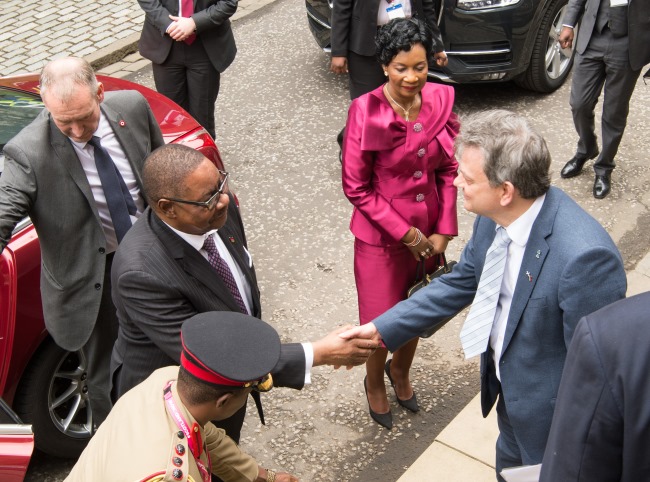 Professor Sir Anton Muscatelli said: “We were absolutely delighted that the President of Malawi chose to come to the University of Glasgow to witness the way in which our world-changing research is having a real impact through our collaborations with Malawi. We look forward to continuing to work closely with Malawi and the Scottish Government.”

The President and First Lady were shown an exhibition of the African Lakes Corporation Archive, housed by the University’s Archives, by Moira Rankin, Senior Archivist, Siobhan Convery, Assistant Director, Collections Strategy, and Dr Jelmer Vos, Lecturer in Global History, who said he was “particularly keen to encourage more students to carry out research, at PhD and postdoctoral level, into this area of African history so that past history can inform current relationships”. 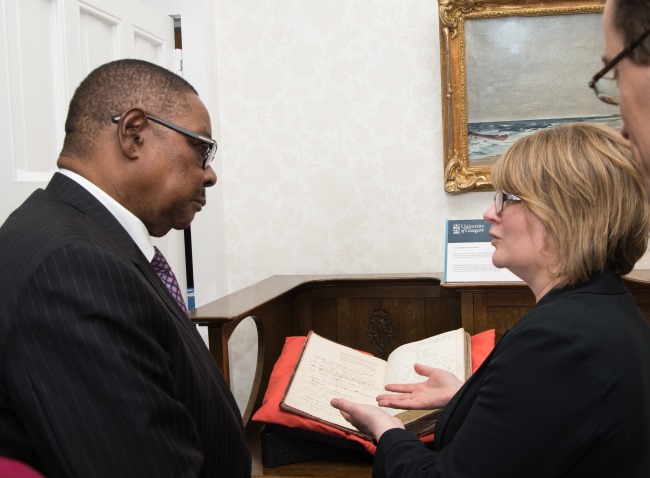 The African Lakes Corporation plc was established in Glasgow in 1878 as the Livingstonia Central Africa Company by a number of philanthropists who had been impressed by Dr David Livingstone’s plea for the establishment of regular trade routes and the introduction of lawful commerce whereby the slave trade might be exterminated and security obtained for the life and property of the native inhabitants of Central Africa. On the liquidation of the company in 2007, the archive was purchased at auction by its former chief executive, Donald MacKenzie. It was gifted to the University in 2008 and catalogued with the assistance of Paul Lihoma in 2008 and Mabvuto Kamulayike in 2011, both from Malawi.

Institute of Infection, Immunity and Inflammation

Some of the University’s leading researchers with longstanding links to Malawi also met the President and his party.

Professor Iain McInnes, Director of the Institute of Infection, Immunity and Inflammation, talked about the Blantyre-Blantyre clinical lab facility at the College of Medicine in Malawi – a £2million project funded by the Scottish Government, Wellcome Trust and the World Bank to bring educational and health benefits to the people of both Malawi and Scotland, in part by comparing healthy and unhealthy lifestyles in Blantyre in Malawi and Blantyre just outside Glasgow. His area of specialisation – rheumatology – is a growing health problem in Malawi. 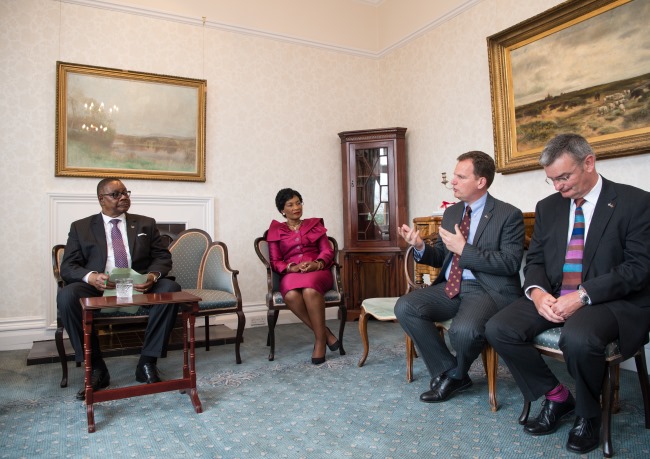 Professor Paul Garside, Global Health Lead, Institute of Infection, Immunity and Inflammation, talked about his work with colleagues in Malawi on immune systems research, while Professor Andy Waters, Director of the Wellcome Centre for Molecular Parasitology, Institute of Infection, Immunity and Inflammation, discussed his research into malaria and other parasite-borne diseases.
Professor Jeremy Bagg, head of the Glasgow Dental School, is working through the University of Glasgow and the Royal College of Physicians and Surgeons of Glasgow to support the College of Medicine in Malawi to establish a Batchelor of Dental Surgery programme and also to establish a national oral health policy for Malawi.

The College of Medicine has been given £100,000 by the Scottish Government to support its transition to a fully independent university. Professor Simon Guild, Head of the School of Life Sciences, is to support the College in terms of academic governance, ethics and oversight.
The President also met two young Malawians - Nelson Simwela, a PhD student who is working on malaria in the Wellcome Centre for Molecular Parisitology, and Dr Mukanthu Nyirenda, a post-doctoral researcher at the Institute of Infection, Immunity and Inflammation, who is working on rheumatoid arthritis and multiple sclerosis pathways.