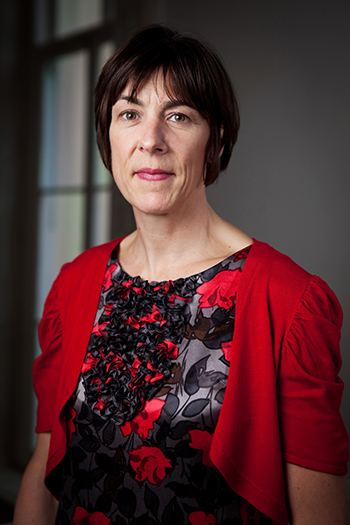 Hundreds of people gathered in the University Chapel on 8 September to pay tribute to the life and work of Professor Tessa Holyoake.

Professor Holyoake, a world-renowned expert in Chronic Myeloid Leukaemia (CML) and one of the most exceptional scientists and clinicians of her generation, died peacefully on 30 August, aged 54.

Professor Holyoake was the Professor of Experimental Haematology in the Institute of Cancer Sciences at the University of Glasgow and Director of the Paul O'Gorman Leukaemia Research Centre. She is remembered for her world-leading contributions to CML, and as an inspiration and friend by colleagues and patients alike.

Born in 1963 in Aberdeen, she was educated at Albyn school and later went on to study medicine at the University of Glasgow before embarking on a research career in Glasgow and then Vancouver, where she lived for two years with her husband Andy.

One of the most outstanding clinician scientists in the field of Experimental Haematology, she joined the University  in 1992, achieving her personal professorship in October 2004. She made a number of seminal observations that have transformed our understanding of CML and its treatment. Most notably, she was the first to identify the existence of cancer stem cells in CML in 1999 during her research fellowship in Vancouver. Later, she demonstrated the resistance of these stem cells to CML-specific therapies such as imatinib and newer, more potent CML therapies.

Professor Holyoake made a world-leading contribution to her field, by identifying key CML stem cell survival pathways that can be manipulated to develop potential new treatments. This will have an enormous impact on the lives of patients with CML.  As a direct result of Professor Holyoake’s research, CML patients who have had poor responses to standard therapies have been offered alternative treatment in clinical trials in an attempt to achieve remission.

Her pioneering studies from 2002 onwards, investigating treatment resistance, opened a very active area of research across the world and generated numerous novel therapeutic strategies currently being evaluated in clinical trials. The hope and benefit this work has given patients cannot be underestimated and without doubt, Professor Holyoake became the most highly acclaimed and successful researcher in this field in the UK.

In addition to her research work and clinical expertise in driving national and international strategies for patient management, she made a huge contribution to scholarships in haematology in Europe and beyond, through membership of numerous grant-awarding bodies, including the European Hematology Association, MRC, CR-UK, the Academy of Medical Sciences and Bloodwise. Professor Holyoake was also on the editorial boards of scientific journals, including Blood, Leukemia and British Journal of Haematology, and organised and gave plenary lectures at conferences around the world. In addition, she had numerous publications in high impact factor journals including Nature, Cancer Discovery and the Journal of Clinical Oncology.

Professor Holyoake was the director of the Paul O’Gorman Leukaemia Research Centre and was a key member of the Advisory Board for the fundraising campaign to build the centre raising in excess of £4 million. She worked tirelessly to lead the fundraising, design and commissioning of this facility which was opened by Dr Richard Rockefeller in 2008. The Centre now houses and supports seven translational research team leaders and around 45 research scientists and students, all working in experimental haematology. She has been an inspiration to all staff, past and present, clinical and scientific, at the Centre and many other clinicians and scientists across the world.

The Centre is now recognised internationally as a centre of excellence for leukaemia research and houses the largest biobank of CML patient samples in the world.  Professor Holyoake held research grants worth over £8million from Research Councils, charities, and industry.  In addition to her role as Director of the Centre, she was a Consultant Haematologist at the Beatson West of Scotland Cancer Centre. Here, her patients often expressed great admiration for her scientific achievements, but her main focus at clinic was always to be an excellent and compassionate clinician, which she continued to be despite her academic workload.

In 2009, she won the Scottish Health Awards Cancer Care Award, in 2011, the Lord Provost of Glasgow Health Award and in 2015, she was awarded the Scottish Alba Saltire Society Fletcher of Saltoun Award for her contribution to science, and the Scottish Cancer Foundation Inaugural Prize and Evans/Forrest Medal. She was made a Fellow of the Academy of Medical Sciences in 2013. In March 2017, she was awarded the prestigious Rowley Prize by the International CML Foundation in recognition of her ground breaking work understanding and targeting CML stem cells.

She was elected to the Royal Society of Edinburgh (RSE) in 2007, and in July 2017, she was awarded a RSE Royal Medal by Her Majesty the Queen in recognition of her outstanding contribution to the field of Life Sciences, through her discovery of the existence of cancer stem cells in CML and her development of a new therapy for this condition.

Outside of work, Tessa spent much of her time with her husband Andy at their beloved holiday house on Loch Tummel usually in the company of some of their many friends and family. Cycling, running, swimming or some other exercise was invariably on the agenda as was a soak in the hot tub in the early evening. With the help of friends, family and excellent local GP and district nurse support Tessa was able to stay at their holiday home until she died.

Asked to describe Professor Holyoake in three words colleagues and friends agreed she was energetic, enthusiastic and inspirational. She will be remembered by family, friends and colleagues as a hardworking and dedicated clinician, outstanding scientist, fearless mountain biker and cake lover.

Professor Holyoake is survived by her husband Andy, her mum Mary, sister Sylvia and her brother Nick.

We are collating memories of Tessa to give to her family. You are welcome to share your thoughts and condolences by emailing communications@glasgow.ac.uk or on Facebook

Many people have shared messages of sympathy on social media 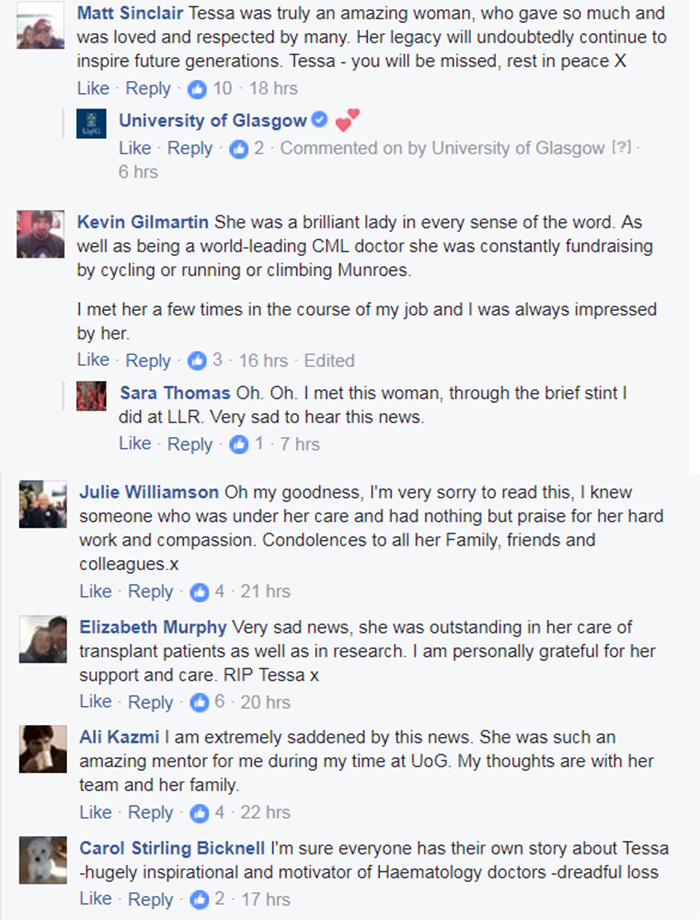