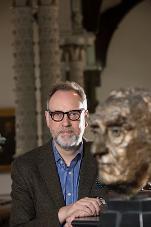 Professor David Gaimster, Director of the Hunterian Museum and Art Gallery, is to leave the University to take up a major role in New Zealand.

It's just been announced that he has been appointed Director of the Auckland War Memorial Museum. The museum is described as New Zealand's first Museum. It portrays the story of New Zealand, its place in the Pacific and its people. The Museum is a war memorial for the province of Auckland and holds one of New Zealand's top three heritage libraries. It holds pre-eminent Māori and Pacific collections, significant natural history resources and major social and military history collections, as well as decorative arts and pictorial collections.

David told Campus e-News: "It has been a great pleasure and privilege to lead The Hunterian over the last six and a half years. It has been particularly rewarding to help deliver the Kelvin Hall Phase 1 project, working in close partnership with the City of Glasgow, Glasgow Life and the National Library of Scotland. The Hunterian Collections Study Centre at Kelvin Hall is the most extensive in the Higher Education world and the envy of our peers.

It's believed Professor Gaimster will take up his new role in March.

The Secretary of University Court, David Newall, said: "I would like to wish David every success with this new appointment, but he is a real loss to the University.  The Hunterian now has a greater impact than ever before on the academic work of the University and on the wider community.  I am very grateful to David for the leadership and commitment he has shown in his years as Director of the Hunterian.'

A spokeswoman for the Hunterian said Professor Gaimster had led the museum and art gallery through a significant period of change: