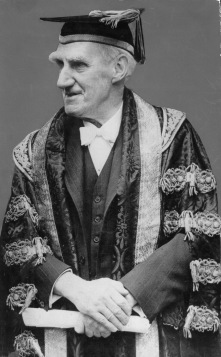 Since it was founded in 1945, countries have used the day to come together and strengthen international and national solidarity in the struggle against world hunger.

To celebrate ‘World Food Day’, we thought it would be fitting to look at the life of Rector and Nobel Prize winning nutritionist John Boyd Orr.

Orr spent much of his career fighting against hunger and malnutrition in Britain during the war and post-war years. He was also one of the first scientists to identify the link between low income and nutritional deprivation.

Through the 1920s, his own research was devoted mainly to animal nutrition but his focus changed to human nutrition both as a researcher, undertaking large-scale surveys, and an active lobbyist and propagandist for improving people’s diets. 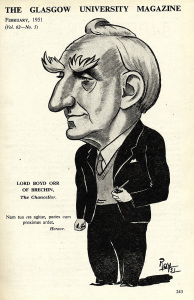 In 1927, he proved the value of milk being supplied to school children, which led to free school milk provision in the UK.

His 1936 report: Food, Health and Income showed that at least one third of the UK population were so poor that they could not afford to buy sufficient food to provide a healthy diet.

During the Second World War, he was a member of Churchill’s Scientific Committee on Food Policy and helped to develop food rationing.

Post war he accepted the post of director-general of the Food and Agriculture Organization of the United Nations. He set up an International Emergency Food Council, with thirty-four member nations, to meet the post-war food crisis but his proposal for the establishment of a World Food Board failed in 1947 and he resigned from his post.

He was awarded the Nobel Peace Prize in 1949 for his scientific research into nutrition and his work as the first Director-General of the United Nations Food and Agriculture Organization.

He donated the financial part of the Prize to the National Peace Council, the World Movement for World Federal Government, and other organizations devoted to world peace and a united world government.

Boyd Orr’s legacy can be seen throughout the University today. To mark his achievements, the University awarded him an honorary degree in 1947. Moreover, the Boyd Orr Building is named for him, and a collection of Orr’s WW1 medals are held in the Coin Cabinet of the Hunterian Museum.

He will be remembered for his scientific integrity, and his firm belief that access to food and proper nutrition is vital to maintaining peace and prosperity worldwide.

You can view a profile for John Boyd Orr on the University Story website here and can read more about his Nobel Peace Prize on our World Changing site here.

One of the ways that the work of John Boyd Orr lives on at the University of Glasgow is through the Boyd Orr Centre for Population and Ecosystem Health.

At the Centre researchers  address similar work to that of Boyd Orr including  a wide program of One Health based research, focusing on developing solutions to improving the health of people, their livestock and the ecosystems in which they live.

In 2013 the Centre was awarded the Queen’s Anniversary Prize for their impact based research.