Historical documents and artefacts charting the history of Erskine Hospital, some of which lay hidden in a derelict room for years, have been recovered and are being formally catalogued for the first time.‌‌

Much of the precious archive was unearthed in a locked room, discovered by a member of staff in a disused part of an Erskine Hospital building.

The University of Glasgow’s Archives Services, through funding from the Wellcome Trust, has now teamed up with the veterans’ charity Erskine and appointed an archivist and a preservation assistant to work through the boxes of material to catalogue their contents.‌ 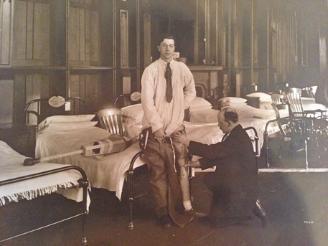 It was Sir William’s compassion and determination to improve the lives of amputees in WW1 which led to the advancement in prosthetics. The archive contains a full collection of wooden shoe-size moulds used in the workshops for the manufacture of prosthetic legs.