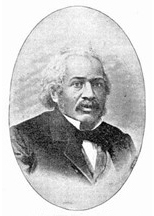 On the 150th anniversary of the death of James McCune Smith, a lecture in his memory will be held at 5-30pm on Tuesday 17 November 2015 in the Yudowitz Lecture Theatre in the Wolfson Medical Building.

The speaker will be Professor Simon Newman and the title of his lecture is:

‘Run away from his Master’: freedom-seeking slaves in eighteenth-century Britain.

The lecture will be followed by a drinks reception in the Atrium of the Wolfson Medical Building.
James McCune Smith was the first African American to receive a university medical degree anywhere in the world. He graduated from the University of Glasgow BA in 1835, MA in 1836, and MD in 1837.

Born a slave in 1813 in New York City, but liberated by the New York State's Emancipation Act of 1827, Smith was denied admission to universities in the United States on account of his race. Accepted by the University of Glasgow, Smith’s studies were funded in part by the Glasgow Emancipation Society, of which he became an active member.
Not only a successful physician, Smith became a great abolitionist and educator, and has been recognised as one of the foremost black intellectuals in nineteenth-century America.

The University of Glasgow is proud to call James McCune Smith one of its alumni.

Although this is a free event, please register on the Eventbrite website.