A new game developed by a PhD student from the University of Glasgow is aiming to help kids understand more about the complicated system of bacteria which live in their gut and how they are affected by antibiotics. 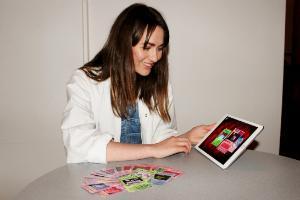 Bacteria Combat is a Top Trumps-style game aimed at players aged between 8 and 13. Players are given cards representing a wide range of ‘friendly’ and ‘harmful’ bacteria. They face off against a computer-controlled ‘Bacteria Bot’ by pitting their bacteria’s strength, regeneration, speed and resistance scores against each other, with the highest scores winning the round.

Each card also provides a picture of the bacteria and a short description of their characteristics, helping players to learn more about the world of bacteria. ‘Joker’ cards representing antibiotics can also help to banish bad bacteria and win the round. 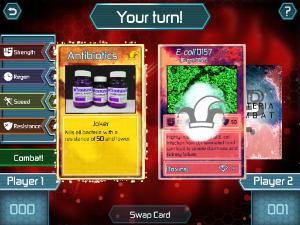 Behind the fun gameplay, however, is a serious message. Widespread misuse and overuse of antibiotic medications in human and animals over decades has led to the problem of antibiotic resistance, where microbes become less affected by medications which have proved successful in improving health in the past. This has led to a dwindling supply of effective antimicrobial therapies.

Disruption of beneficial gut bacteria via increased antibiotic exposure in childhood is also linked to the development of asthma, obesity, autism and inflammatory bowel disease.

The game originally began with a set of actual cards depicting the bacteria, created by Carla in partnership with Edinburgh-based graphic designer Siam Colvine. After the success of the card game in schools across Scotland, Brown teamed up with a Dundee-based game development company, Future Fossil Studios, to create the Bacteria Combat app. Future Fossil Studios’ previous work includes the Princes Trust Games Design projects and Dare Schools Challenge.

Carla said: “To ensure new classes of antibiotics are used effectively we must also improve public awareness on the specific role of antibiotics against bacteria and also the emerging problem of resistance.

“If abused or misused, this type of antibiotic can promote antibiotic resistance which is severely undermining the effectiveness of these drugs today.  These health topics are ineffectively communicated to the public and often inaccurately described by the media.

“I have a real passion for education and as I come from a working class background, I value the use of alternative, sustainable and motivational teaching resources which are accessible to all classrooms. I believe that the ‘gamification’ of science can make difficult topics much more easy to grasp.

“If antibiotic resistance is not tackled effectively we are at threat of a 'post-antibiotic era' in which minor infections and surgeries could prove fatal.  Education of the public will be an extremely important factor in tackling this problem.  It is important that we encourage the public to feel more confident about controlling their own health care. Science games will be a great method for this”.

Antibiotic resistance costs the NHS £1.5 billion per year due to healthcare costs and loss of productivity.  Increased public awareness may contribute to reduced pressure on NHS spending in this area of health care.

One solution to this problem is the development of new classes of antibiotics which target specific bacteria and can overcome the problem of resistance.

Carla’s PhD supervisor, Dr Daniel Walker of the University’s Institute of Infection, Immunity and Inflammation, is leading a group which is developing of new classes of antibiotics which target specific bacteria and can overcome the problem of resistance. The group are investigating the efficiency of species specific antibiotics against difficult to treat infections, including the multidrug-resistant Pseudomonas aeruginosa infection.

Carla Brown has launched her own social enterprise startup, called Game Doctor,  which will focus on the development of digital games to educate the public on important health topics.

Bacteria Combat is available from the Google Play store.  It can also be played online at http://futurefossilstudios.com/bc/webgl/ A multiplayer version of the app is expected to launch early next year.