This year is the 125th anniversary of the Queen Margaret Union. To mark the event the QMU are hosting an anniversary dinner on 28 March 2015. For more details visit QMU 125 anniversary celebrations.

Dr Amanda Charland, looks back on the history of the QMU. 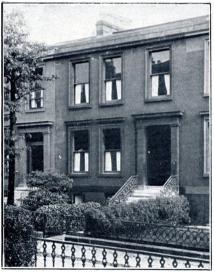 According to the College’s former Mistress, Frances Melville, who wrote a history of the College in The College Courant in 1949: “The ‘Union’…was started to promote inter alia various amenities in the College, a place for recreation and meeting out of classroom, and a centre from which any outside work undertaken by students might radiate.”

The Union has been located in various premises since its creation, the first being a house in Buckingham Terrace.

In October 1920, no fewer than 1,075 female students had matriculated. The limitations of the Union’s capacity was voiced in a publication entitled The Handicap: How Glasgow College Life is Cramped published in 1921. 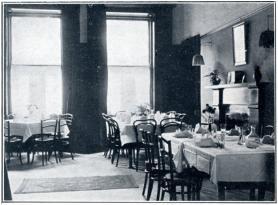 It said: “For those 1,075 women there is available in their Union a dining-room to seat 30 at a time, and the largest room in the building holds but 50 people!”

The men’s union (now referred to as Glasgow University Union) acquired new premises at the foot of University Gardens in 1930.

Their old union (now the John McIntyre Building) was given to the students of the Queen Margaret Union.

The building was described scornfully at the time as “that rat-hole” by the Lord Rector Mr. Stanley Baldwin.

Assisted handsomely by the University Court, the QMU refurbished the building fully.

In 1932 these refurbished premises were regarded by Frances Melville as “the finest women students’ club in the Kingdom.” 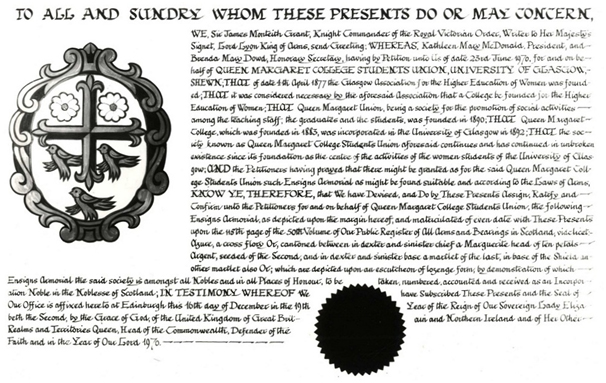 Growing student numbers put pressure on the Union for a third move. The Queen Margaret Union moved to its present location on University Gardens which was formally opened by the Principal, Sir Charles Wilson, on 14 March 1968 in place of Lady Isobel Barnett, who was indisposed.

Designed by Walter Underwood & Partners, the site was formerly occupied by the University Observatory. An old mine workings had to be filled with concrete to provide foundations for the building.

The new structure was considerably bigger than the previous locations.

According to an entry in the Glasgow University Gazette, “The debating hall can seat 590 in the main area with a further 150 on the balcony…The second floor is occupied by… a lounge area which can take 180 people. In the dining area 200 people can be served at one sitting, while the kitchens are equipped to serve 700 meals over a period of two hours…The third floor also has dormitory space for 27 students for overnight accommodation, as well as a small guest suite”.

In 1979 the QMU proposed to admit men as full and equal members.

Coming soon: In Avenue 58, the June 2015 issue of the University’s alumni magazine, past and present Presidents of the QMU talk about how the Union has impacted on their lives and the lives of its members. Avenue 58 will come to your inbox through Campus e-News in June and will also be published online at www.glasgow.ac.uk/avenue."