Debate and dinner in memory of Charles Kennedy 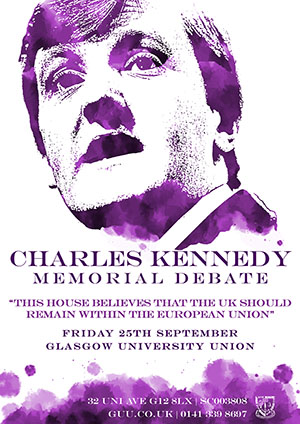 Everyone at the Glasgow University Union was devastated to hear the news about Charles last month.

He was a valued member of the University's community, not just as a two-term Rector, but also as a former President and active alumnus of the GUU.

Charles was particularly renowned for his successes in debating at the Glasgow University Union, winning the Observer Mace competition during his time here in a golden era on the national and international stage.

The Glasgow University Union will mark his achievements and contributions by way of a memorial debate and dinner.

The event will take place on the evening of Friday 25 September, comprising a champagne reception, the debate taking place in our own debates chamber, and a three-course black tie dinner afterwards.

The proposed motion for the debate is one that would have been close to Charles' heart:

The Rt. Hon. Sir Menzies Campbell will chair the debate featuring a distinguished line-up of speakers from across the political spectrum, including members of both the Scottish and Westminster parliaments.

Tickets will be available for both the dinner and gallery (gallery tickets will be free of charge). Any surplus from the event will be donated to the University of Glasgow Charles Kennedy Memorial Fund.

Dinner tickets are priced at £60 per person with a discounted rate for current students of the University. Visit Glasgow University Union website to purchase tickets.