Work on the University of Glasgow’s District Heating Scheme will step up a gear from Monday 2 March.

The project is replacing the existing, fifty year old steam heating system with new technology that will serve most of the Gilmorehill campus - both sides of University Avenue - and will produce large savings in energy costs.  The district heating network will eventually be powered by a Combined Heat and Power engine which will not only produce heat...but can also generate electricty either for the University or for the national grid. 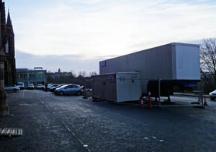 This phase will last about four weeks and will mean the closure of the road between the Davidson Building just East of Science way and the Flag Pole. You can get an idea of the scope and scale of the works from the PDF Diagram (278 KB)

A spokesperson for the project team said: "Clearly staff wishing to travel from Dumbarton Road Gate beyond Science Way will be unable to do so and should enter through the Main Gate or Pearce Lodge. Pedestrians will still be able to use the footpath.

"We have asked the contractor to consider opening half of the road at the conclusion of their working day and at weekends, the response is that if it can be done it will be."

There may be good news about the work on the South Front: the contractor is hoping to be able to use an existing service duct from Principal's residence up to the main entrance to the Gilbert Scott/Main Building; as a result, there may be no need to dig a trench in this area. This will be confirmed after trial excavations are carried out during the first week (March 2)