The College Pudding & the start of Daft Friday

What did the students of the University get up to in the run up to Christmas holidays gone-by? A number of stories of student life from the Archive can help us find out, writes Rachael Egan, Heritage Engagement Officer. 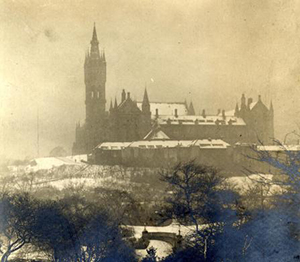 At the end of the 19th century, students of the University sought a Student Union in which to socialise with each other and build a university student community. Part of the fundraising for this venture included a ‘Glorious Bazaar’ that took over the Gilmorehill campus in December 1889.

This Bazaar was held on four days before Christmas and opened with a torch-light procession through the town.

The festivities included: a fancy dress parade; stalls in the cloisters selling goods such as farm produce; side-shows such as ‘beanbag chucking’ and ‘Izaak Walton’s Fish-pond’; and a mythological play, titled The Priest of Apollo, was written and performed by students.

This festive Bazaar was greatly successful and raised almost £14,000, double the Union’s target of £7,000!

The GUM magazine summed up the Bazzar by saying:

“..he would be a strange soul indeed who did not think the shadowy past the richer for the memories of the “Student’s Union Bazaar” of December, 1889.”

This gave the Student Union a great start and whetted student appetites for festive fun.

In the early 1900s, students, like Osborne Henry Mavor (known under his creative pseudonym of ‘James Bridie’), were seeking entertainments on campus.

In Mavor’s autobiography he claims to have invented the Glasgow University Union’s winter celebration ‘Daft Friday’ in 1905! 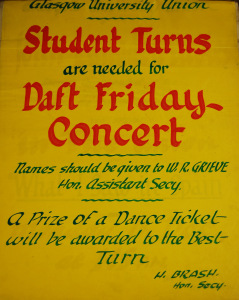 Mavor describes calling upon the Union’s president for a concert. The President and Mavor brought a piano into the committee room of the Union and started a sing-along with the other Union members. After about half an hour, Mavor reports, the commitee room became so full of members, they had to move to the Debating Hall.

The merry-making ran from ten-o’clock in the morning on the Friday until the Saturday and:

“Nobody with any tincture of humanity in him attended a class that day.”

By the 1920s, students had a particular penchant for dancing. In 1922 the Student Union ran its first Dance, and soon afterwards the Athletic Club held a dance every Saturday night from 7pm-11.30pm.  A winter dance was organised in 1925 with a Union minute of November 1925 stating that:

and in this way, Daft Friday festivities, as we recognise them today, were inaugurated.

This ‘Roaring 20s’ desire for dancing and frolicks manifested itself in other celebrations and traditions around campus.

With a similar aim to the Bazaar of 1889, the Student’s Representative Council began staging a winter-time revue to raise funds for , firstly, the ‘Student Welfare Fund’ (a fund for the social and athletic life of students) and then for the ‘Charities’ Day Fund’.

This revue was named the ‘College Pudding’ and was organised in association with societies at the University such as the Glasgow University Dramatic Society, the Dramatic Club and Dialectic Society. The revue was first staged at the Lyric Theatre in December 1925.

The revue was a variety show of student performances including sketches, musical recitals, dance numbers, and strong man acts and each year a programme was made for the show and reports of the show were shared in student magazines and newspapers.

The ‘Pudding’ ran from 1925 until the 1950s, was revived in the 1960s and was staged in the winter-time at venues around Glasgow such as the Royal Princess’s Theatre, Paramount Theatre, and the Arts Theatre in University Gardens. 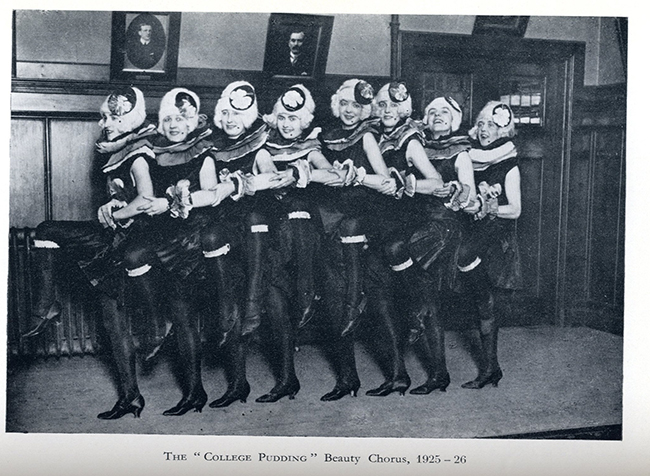 If you would like to come and research the papers of student activities at the University, please visit us by making an appointment with the archivist on: enquiries@archives.gla.ac.uk

For more stories from the archives, visit Archive Services blog