UofG engineering student Morven Fraser has been named as the winner of the seventh annual Autocar-Courland Next Generation Award. It aims to help people get into the motor industry. 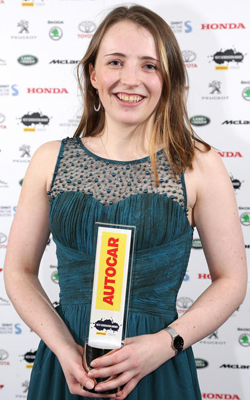 Morven, who is currently studying Mechanical Engineering at the University of Glasgow, impressed the judges with her innovative concept for body panels that can capture and store energy.

The energy capturing system combines photovoltic paint, which is applied to the body panels of electric and hybrid vehicles to capture solar energy, and nanobattery storage cells located in carbonfibre body panels to store the energy. The concept could help to extend the range capabilities of those vehicles, as well as reducing the current reliance on heavy lithium ion battery packs.

The Autocar-Courland Next Generation Award is designed to help students and graduates kick-start a career in the motor industry, and is supported by manufacturers including Jaguar Land Rover, McLaren, Peugeot, Skoda, Toyota and Honda. Morven will now undertake work experience at each of those manufacturers, as well as enjoying a £9000 cash prize.

Finalists in this year's competition were also invited to the prize-giving ceremony, held as part of the Society of Motor Manufacturers and Traders' annual dinner in central London. The finalists included University of Birmingham student Edward Chamberlain, who proposed a tactile feedback system for accelerator pedals, and Michael Everymann from the University of Portsmouth, whose idea was a self-replenishing windscreen washer system.

Speaking at the event, Autocar editor-in-chief and lead judge Steve Cropley said: "Year on year, the calibre of the entries we receive for this competition raises the bar higher.

“Our judging process has been hugely engaging again and it has reaffirmed that you can simply never judge a book by its cover. Often when you see finalists’ submissions for the first time, it’s easy to think you have the measure of the entrant, but when they then breathe life into their ideas, you often find yourself thinking again."

Previous Autocar-Courland Next Generation Award winners are already working in the automotive industry, in areas including PR, engineering, and paint and trim.