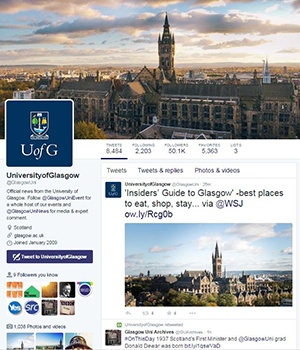 The University of Glasgow has ranked top for most effective use of social media in an independent study.

The company compared social media activity during one week in August for the top ten universities in Scotland, as ranked by the guardian, using a range of different metrics. The University of Glasgow came out as the overwhelming winner by scoring 37 points out of a possible 40.

Social Media Manager Emma Gilmartin said: “We are delighted that we are performing so well in the sector – not only in Scotland but some weeks our engagement levels have rivalled and surpassed Oxford, Cambridge, Harvard and Yale – who have millions of followers.

"We have worked hard to bring campus to life on all our social channels, tell stories that celebrate our staff and students achievements as well as providing an excellent ‘customer service.”

Peter Aitchison, Director of Communications and Public Affairs said, 'Social media, and the benefits that it can bring both for instant communication and direct engagement with our students, staff, alumni and the general public is something we have worked hard to develop. It is to the huge credit of Emma Gilmartin and her team that the success of the University of Glasgow is being so publicly recognised. But more innovations are planned, so watch this space!"

The study detailed: “The University of Glasgow are taking engagement seriously by replying promptly to their followers’ comments and posts. In terms of engagement Glasgow was so far ahead of the others as to be in a different universe.”

Some of Glasgow’s social media successes highlighted in the study include: