Dr Tony Pollard, Senior Lecturer in History/Battlefield Archaeology at the University of Glasgow, has won a Celtic Media Festival award together with co-presenter, Neil Oliver.

Dr Pollard received the award for his television documentary ‘The Quest for Bannockburn’ in the factual series category of the competition.

Quest for Bannockburn follows Tony Pollard and Neil Oliver as they set out to solve one of the biggest puzzles in battlefield archaeology.

More than 700 years ago, Robert the Bruce's overwhelming victory over the English at the Battle of Bannockburn helped seal Scotland's future as an independent kingdom. However, the actual location of the battle remains a mystery. In this documentary Tony and Neil go in search of both the real and imagined Battle of Bannockburn.

Dr Pollard said: "Winning has been very gratifying as a lot people put a huge amount of work into the archaeological project that provided the basis for the programmes. The production team were also great and I think at the end of the day we had created something of which we were all proud."

The competition was part of The Celtic Media Festival, an annual three-day event that promotes the languages and cultures of the Celtic Nations and Regions in media. 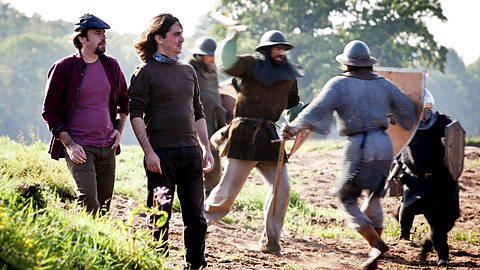