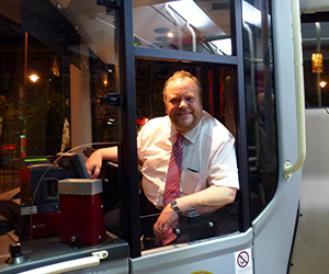 There’ll be no “green-wash” or “eco babble” coming from the direction of the University of Glasgow’s Environmental Adviser, Dr Steve Johnson.

He works within the Safety and Environmental Protection Services team.  “I’m trying to change slightly the direction of the job,” says Steve.

“I think I can be most effective not as an ‘enforcer’ but as an adviser. I want to fill the space between the University and the statutory, enforcement agencies.

"I’d far rather know about a potential problem we might have NOW, and be able to deal with it, than to hear about it later on when something adverse has happened, and I look like a turkey!”

Taking a look at Steve’s immediate track-record, it appears he has a high chance of being successful in keeping the watchdogs at bay.  He has to be prodded quite hard before he owns up to a long list of awards and achievements, most of them delivered when he was the Environmental Manager for Lothian Buses in Edinburgh. As environmental regulations became tougher and tougher, he single-handedly developed environmental management at the bus company. This culminated with Lothian Buses being named in 2012 as ‘best, large green company in Scotland’.  His awards in that role just start with:

Amazingly, this isn’t the complete list, there are at least another five awards, but Steve is too bashful to want to detail them. 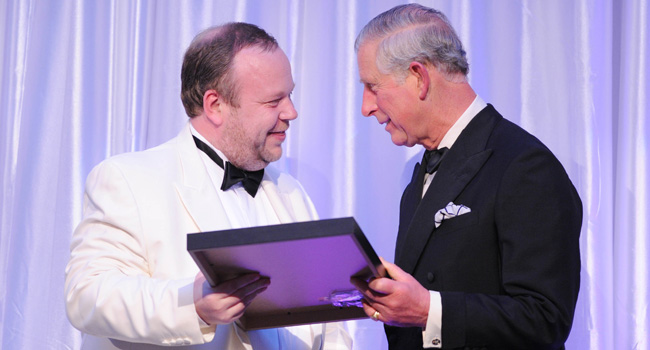 A native son of Northumberland, Steve is 40, married "with cats" and now resident in Edinburgh. Whenever he has the time, he enjoys returning to his Northumberland coast homeland.  One suspects he takes delight in pointing out to strangers confused by his accent that he is definitely not a Geordie.

His career path into the environmental protection sector is…quixotic.  How does a botany graduate with a PhD in biochemistry manage to include learning to drive a bus in Wolverhampton on his CV? The answer is Steve’s life-long passion for bus transport.  In his student breaks he earned money by driving buses, most of the time for open-top tour bus companies.

School and University took him inexorably into plant/bio chemistry.  So much so that he spent ten years at the University of Durham investigating the biochemical factors underpinning bruising in potatoes.  (It might sound arcane, but it got a lot of attention from the produce buyers at Tesco.) 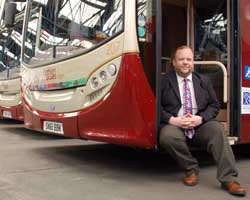 When Steve’s wife took an academic post at Heriot Watt University, he found himself back in Edinburgh looking for a job.  The lure of the open road, behind the wheel of a bus, was too much to resist and he found himself with Lothian Buses.

“It was very odd: one week you are a University tutor and senior researcher and the next week you are driving a bus through Niddrie with people taking pot-shots at you with an airgun!"

Steve was soon in management, as a schedules officer for the company. He also realised that the writing was already on the wall for heavy-mileage passenger vehicles spreading oil and belching clouds of black exhaust. Knowing his science background, the company’s directors cajoled him to take up an environmental compliance and carbon reduction brief. With a background in science, and a childhood love of buses, it was his dream job. He was soon busy trying to calculate the size of the bus company’s carbon footprint. He became head of a department responsible for carbon management and a member of the senior leadership team.

Worst experiences driving a bus?
"One evening in Edinburgh I was driving the last open top bus tour of the day. The tickets for the tours were all-day tickets so the last trip could get very busy with passengers. I also had the reputation for taking the oldest and worst buses out of the depot…the ones the other drivers wouldn’t touch! That evening, I got to the top of Abbeyhill trying to turn into Regent Road with well over 100 passengers on board and the bus just refused to move. When the lights turned green, I pressed my foot to the floor and all I could see in my rear mirror was a long, black cylinder of smoke jetting from the exhaust and shooting across the road. The bus was simply sitting stationary on the hill gently rocking from side to side. I don’t know how many changes of the lights we went through, but after fifteen minutes, moving an inch at a time, we finally negotiated the junction."

"On another occasion driving a bus, minding my own business, I became aware of road works barriers tumbling over in the wake of my bus. There was also something I couldn’t quite make out following me. It turned out that a badly laid temporary traffic lights cable had snagged on my back wheels. Unbeknown to me I was dragging it up the road, toppling all the safety barriers and the 'thing' following me was the traffic lights themselves!"

In his relatively new role at the University of Glasgow, Steve has spent the last few months quietly touring Schools and departments meeting people, trying to raise the profile of environmental management.

“I want to encourage everyone to be aspirational in this field. At the moment, we are very focused on compliance.  We are concerned about meeting the requirements laid upon us…but I think there are many people on campus who feel that we can do better than just meet the requirements. We can exceed them," he says confidently.

“Environmental issues can actually work to the advantage of the University. It should help with staff and student recruitment: people like the idea of being environmentally friendly.  A good environmental portfolio can really work for the University – it enhances our reputation.  There’s no reason why we shouldn’t be at the top of the league tables in this area.”

If you fear environmental zealotry from Steve, you need have no worry. He grins and says: “At every turn in my last job, and in this job, I am desperately trying to avoid what you might call ‘green-wash’.

“In my last role, I was responsible for environmental and sustainability but I was also responsible for corporate social responsibility and took care of all our community engagement. If you speak to anyone who knows me, there was no painting of fences, there was no obsession with picking up litter. It was bespoke community engagement built around the needs of the business…what people wanted to do and what we could do and could do well.  We built a reputation for doing really good things, including working with kids with learning difficulties. I’m desperate to avoid the traditional way of looking at these things.”

By all accounts, Steve shunned green gimmicks and green branding at Lothian Buses, instead he was responsible for the roll-out of Scotland’s first hybrid buses in 2011. “When we got the hybrids, they weren’t covered in green logos and badges, they were in a smart, clean livery. We had to look at what the market wanted and we were trying to attract people onto public transport and many of those people were at what you might call the affluent end of the economic spectrum and they’d be commuting in decent cars.

“You are not going to attract those folks out of their BMWs and Mercedes by a bus covered in leaves and butterflies. They need something they will look at and say to themselves: Yes, that’s an acceptable alternative.”

Does Steve the Environmental Adviser have a main priority in mind for the University?  He takes some time and then responds with careful deliberation: “At the position the University is in at this precise time, I think it’s the formation and development of an environmental management system.

“That is not necessarily to get overall environmental accreditations…but at least to build on the good work that is being done to get us to a consistent, accredited standard.  I think that is very important.  We have many people working at different levels and it would be good for us to have that activity gathered together within a bound and framed strategic document. This document will also provide a platform upon which the more aspirational aspects of environmental management can be built.”

There’s another pause for reflection, then a grin: “I am not a holier than thou environmentalist, under any circumstances.  You have got to be pragmatic.”  The University seems to have recruited a scientist who really is enjoying a busman’s holiday!