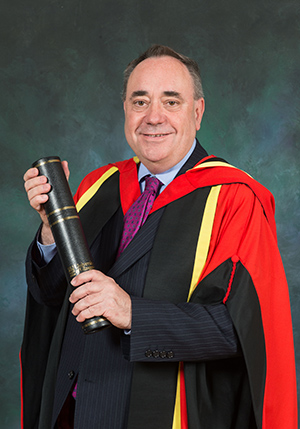 Hundreds of students, staff and members of the public crowded into the Bute Hall on Tuesday 21 April as the former First Minister the Right Hon Alex Salmond was given the honorary degree of Doctor of the University of Glasgow.

The Principal and Vice Chancellor, Professor Anton Muscatelli introduced Mr Salmond, saying “Alex would point to many things that give him a personal sense of pride and satisfaction.

"But I know from his own words and from others who know him that what has really meant so much to him is the fact that 85% of the population turned out for the referendum.”

“The shift from politically passive to politically active has been immense, and that sense of engagement, enthusiasm and positivity, so much a part of Alex Salmond, has now became so much more a part of our national political landscape.

“This University has prided itself in acknowledging great politicians over the years through the award of an honorary degree and we are delighted to do so again this evening.”

The honorary degree was then conferred by the Chancellor of the University of Glasgow, Sir Kenneth Calman.

In his speech Mr Salmond thanked the University for the honour that was bestowed upon him, and then spoke at length of the importance of Adam Smith through two books – The Wealth of Nations and The Theory of Moral Sentiments.

He ended by saying, “Smith’s achievement, over his two masterpieces, was to show that self-interest and sympathy ‘gang the gither’. If we take that message to heart, it will do much to secure not just the wealth, but the well-being of this nation and of all nations.”

On Wednesday 29 April the University of Glasgow will confer an honorary degree on the former Prime Minister Gordon Brown. As with the Alex Salmond event, demand for tickets vastly outstripped supply and all places have now been allocated.

A report on the Gordon Brown ceremony will appear on these pages in the near future . 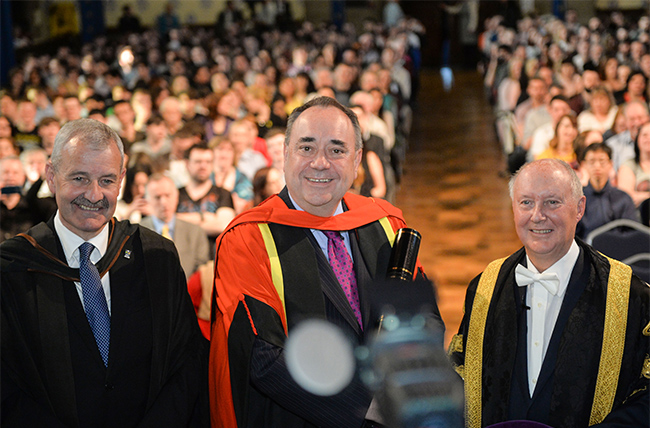