The sinking of the SS City of Cairo

The University of Glasgow archive collection can shed light on a story that was recently in the news, writes Racheal Egan and Neil Ogg.

The BBC recently covered the story of a trove of silver rupees that were recovered from aboard the SS City of Cairo by a British-led team of divers. The silver coins were called in by the British Government to help the War effort during WWII. They were travelling aboard the SS City of Cairo from Bombay to England – along with 311 people - when a U-boat torpedoed the steamship on 6 November 1942.‌ 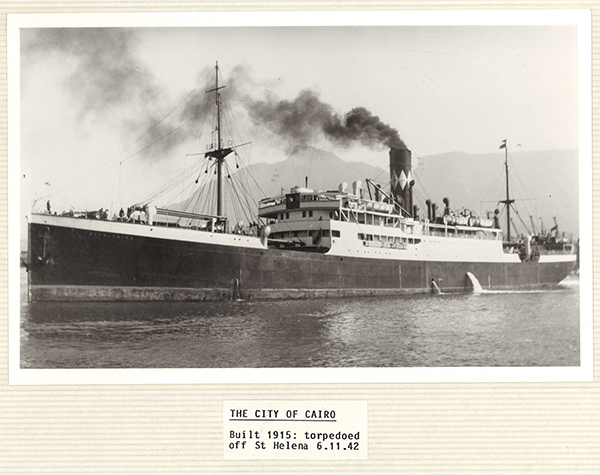 The records within the Scottish Business Archive at the University of Glasgow Archive Services can give us further information about the story of the ship ,survivors and the rescue.

The SS City of Cairo was built in Hull for the Ellerman Shipping line in 1915. The company began as Ellerman & Bucknall (Steamships) Co Ltd in 1740 and initially purchased sailing ships to transport their own merchandise. They replaced their sailing ships with steamers to continue to trade goods around the world in an age of modernisation.

These ships and their crews operated in perilous conditions; forty-one ships were sunk by submarines, seven by air attacks, three by mines and one by surface raider. In total, 60 ships were lost out of the fleet of 105 and one of these was the SS City of Cairo.

The Ellerman & Bucknall (Steamships) Co Ltd archive collection contains photographs and ship files for the SS City of Cairo. The collection even reveals some more of the story of the survivors of the sinking in 1942.

In the Ellerman Collection there is a photograph album made after a reunion of the survivors on 14 September 1984 which includes newspaper clippings from the time of the sinking. There are photographs of the reunion event, during which survivors met the Captain who had sunk their ship! Caption Karl-Friedrich Merten apologised again for torpedoing the vessel and met with each of the survivors.

Six of the 311 people on board the SS City of Cairo died in the original torpedo attack and sinking of the vessel, and  a further 104 of the survivors died in the life-boats as they remained in the ocean for weeks, un-rescued.

Help eventually came, with the British Ship SS Clan Alpine and the merchant ship Bendoran, picking up survivors. The records of the Scottish Business Archive can further reveal the rescue of some of the survivors through the records of the Ben Line Shipping company, the Scottish owners of the Bendoran, which have recently been catalogued. This collection contains photographs of the ship, as well as records of its service during the war.

The Ben Line was a family owned shipping company founded in 1825 and based in Edinburgh. Like Ellerman, they lent many of their steam ships to the war effort – losing a total of 14 of their own ships to enemy attack and sinking. 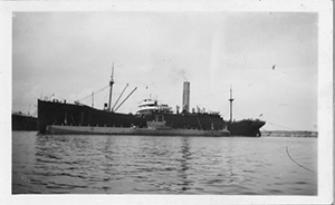 It was one such ship – the Bendoran – that happened upon the survivors of the City of Cairo at daybreak on the morning of 19 November 1942.

An account of the rescue of 48 of these survivors (one of those 48 died a few hours after rescue) created by the Master of the ship is held in the Ben Line collection in the Scottish Business Archive.

This document records the chance early morning sighting of the survivors.

The report provides details of how they were then cared for: they were immediately served hot coffee and officers gave up their rooms and made clothes for the children.

The Master also noted that the ship was 1000 miles from the nearest land – giving a sense of the sheer vastness of the ocean surrounding this drama. The final sentence notes the safe passage to dry land in South Africa, where the survivors: “were taken ashore, and cared for.”

This document served an administrative purpose – it was sent back to head office in Edinburgh to record the actions of the ship and her crew, but it also inadvertently recorded intimate details of the care and compassion shown to these survivors who had been through a horrible ordeal.

Records such as this rescue report and photograph album are vital in providing first-hand accounts of the people caught up in the sweeping events of history. They also demonstrate the value of business collections, and the surprising number of uses they have.

If you would like to see the records of Ellerman or Ben Line, please do visit by making an appointment with our Duty Archivist: enquiries@archives.gla.ac.uk