Hooi Ling Eng, whose substantive role with the University is Web and E-Learning Officer in the College of Social Sciences, is one of the many members of staff working towards the goal of a ‘smart campus’.

‌Currently Hooi Ling, who's 40, is leading a process improvement project to develop the systems which support student assessment and feedback in the Adam Smith Business School (ASBS). 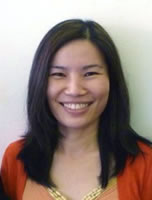 The pilot project has been jointly sponsored by the College of Social Sciences and the University in the expectation that there will be benefits which could extend to students and staff elsewhere on campus. Nicola Birkin, UG Programmes Manager has led the academic administration process changes which go hand in hand with the use of this technology.

Hooi Ling’s involvement with Teleform began in July last year when her secondment began. It is due to finish in June.

She was born in Penang, Malaysia and later her family moved south to the Royal city of Klang in Malaysia’s state of Selangor.  Her mother and sister still live in Malaysia and she has a brother in Singapore. In 1994, Hooi Ling travelled to Germany to study music with the intention of becoming a teacher; happily for the University of Glasgow, she also studied computing science. Three years later, she moved to Glasgow and what was then the Royal Scottish Academy of Music and Drama and is now the Royal Conservatoire. She took a degree in piano and also a Masters in Information Technology at Stirling University.

In 2003 she started working at the University of Glasgow in the former Faculty of Education, joining the College of Social Sciences at the time of restructuring.  She lives in Stirlingshire with her husband Tom and her three year-old son, Aidan. She is still very much a music lover, and when time allows, performs with Harmony Music Ensemble, a traditional Chinese music group.

Hooi Ling says her launch into project management came about almost by accident following a chance conversation. “Two of my colleagues were discussing the use of Teleform technology in the School of Life Sciences and they asked me to look into it,” she says. “I acted on that and we agreed to undertake a small-scale pilot for the Business School in 2013/14 on just a couple of courses. It went really well and those involved were very enthusiastic and wanted a bigger pilot.”

When asked what the most challenging part of the project has been, Hooi Ling pauses to reflect, and then responds: “I think change is always hard. The difficulty comes in trying to persuade people that a lot of the problems that we come up with are actually just by-products of that change – teething problems if you like. For example it might just be people not being sure what the new process might be like in reality.

“For instance, last semester when we were still very much trying to implement and develop at the same time, a lot of the processes were not documented, which they are now. We have been hard at work since the pilot producing more documentation, learning to communicate more effectively and doing more training. Now we are improving all the time.”

She is quick to point out that it has been a team effort, and pays glowing tribute to her immediate colleagues, including Malcolm Goldie, an analyst appointed specifically to support the initiative. Hooi Ling says: "Colleagues from other Schools particularly Ian Reid and Gordon Ritchie were very generous sharing their expertise in TeleForm with us. The College Management Group were very keen on this project and gave us resources to extend the pilot to June."

As a result of the project Hooi Ling and her colleagues have been working on, substantial numbers of written in-course and degree exams have been revolutionised by the introduction of machine-readable exam answer sheets.

The exam sheets are scanned with TeleForm software to log attendance and, subsequently, to record grade information.  Manual processing of exams and grade entering has been significantly reduced, but the real advantage to students is the ability to access their grades and scanned exam answer sheets via Moodle.  Exams can now be returned with in-text comments without the need to photocopy, while students can self-assess their degree exam performance with the benefit of generic feedback on the performance of the class as a whole.

How does Hooi Ling view progress? She doesn’t hesitate in her answer: “It’s the students: we are doing it for the students. Those students that have given us their feedback in the various assessments, and in feedback sessions, have been very positive. They tell us they have found it extremely helpful to see their exam scripts when they get them back together with their exam papers and the generic feedback for the class.

“There are other benefits, obviously: administrative efficiencies such as the easy storage and retrieval of electronic files, but the one key thing that really persuades people of the benefit – and the reason we keep on with this project – is that we know we are working to improve the student experience and that is why this really matters to me and everyone included in the work."

Turning to the future, Hooi Ling is unsure about what might come next. “I guess I’ll return to my usual role once the Teleform project is completed. Certainly the College has many e-learning projects on the go at the moment: e-assessment and Moocs, and so on; it depends on the College’s strategy.

“But I have to say I have very much enjoyed the Teleform project and it’s great to work very closely in a small team in a very busy environment. Yes, I enjoy the contact with people in projects and people have been very supportive of what we are trying to do. We have a great team and I could not have done this without them.”