In 2014 the University of Glasgow Library and the charity Erskine formed a partnership to catalogue and preserve the records of Erskine Hospital, which opened in 1916 as the Princess Louise Hospital for Limbless Sailors and Soldiers. This partnership is the result of Prof Tony Pollard’s research into pioneering surgeon Sir William Macewen’s connections with Erskine.

The Erskine archive has great potential to provide a foundation for a new analysis of the practice & impact of military medicine on British society, particularly in relation to prosthetics. The cataloguing undertaken by Archive Services will open up new avenues of research into the impact of the charity’s work in supporting veterans through the 20th century and beyond.

The collection catalogue is now available to view here

This project is funded by the Wellcome Trust’s Research Resources Grant Scheme, which aids research by supporting projects to catalogue and preserve significant primary source collections in libraries and archives across the UK and Ireland.

Dr Jennifer Novotny, who was in receipt of a Wellcome Trust Research Bursary, has published an article To 'take their place among the productive members of society': Vocational rehabilitation of WWI wounded at Erskine and a blog post What we learned from World War I’s wounded veterans based on her research on the Erskine collection.

In War and Peace: The Erskine Story 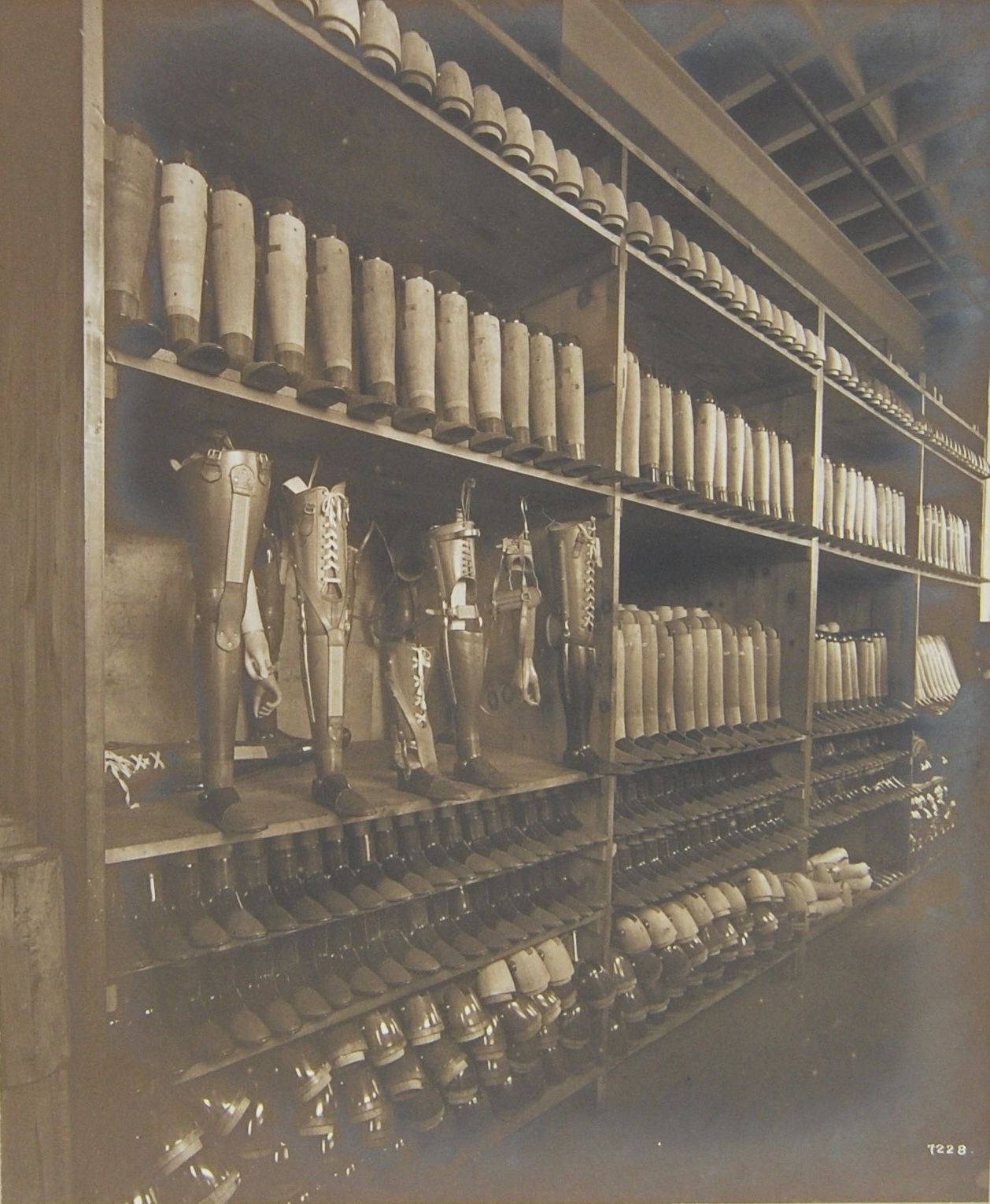 Find out more about the pr

oject, including the conservation methods used for some of the items here ‌ 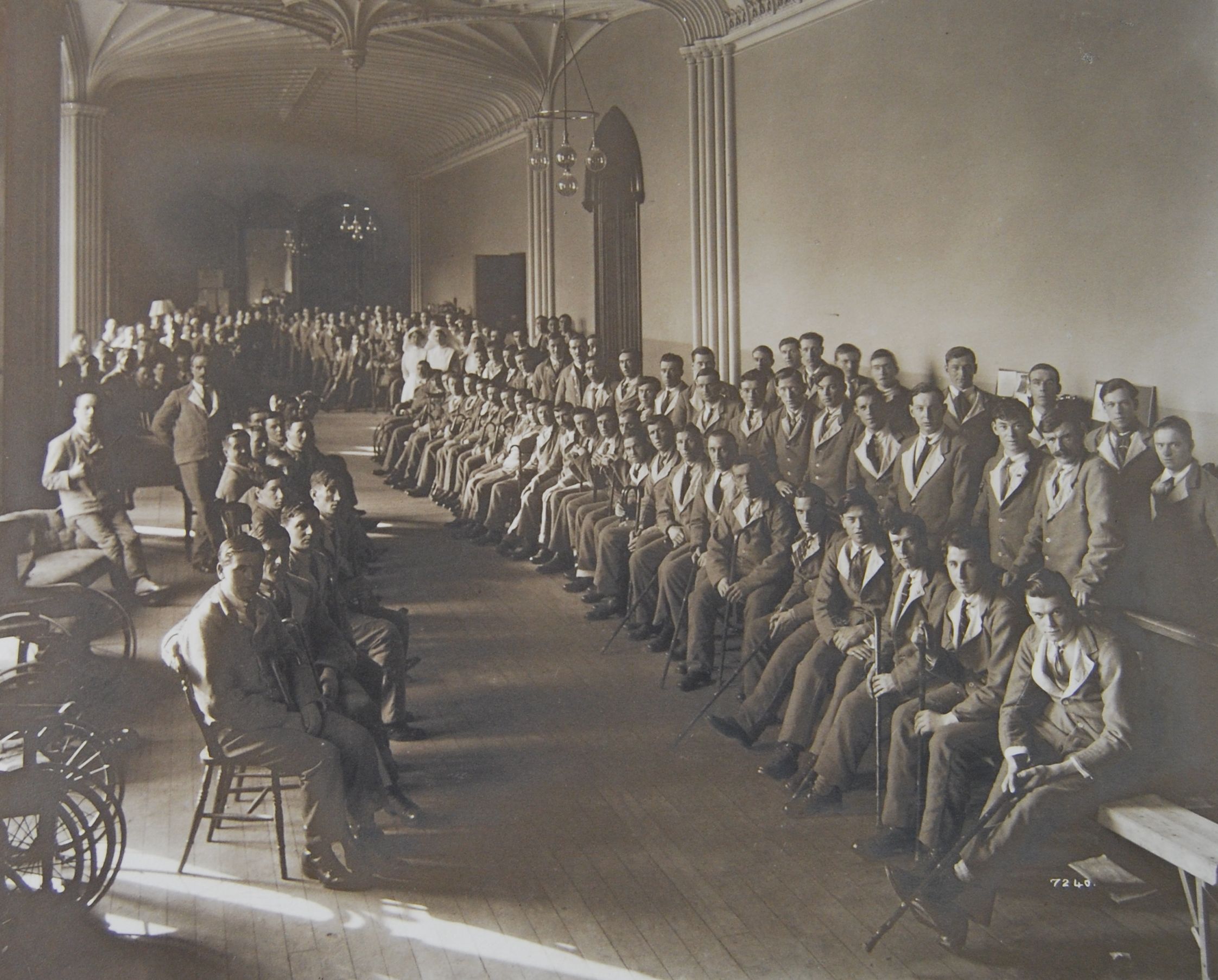 Erskine was established as a direct response to the need for specialised medical facilities to deal with the unprecedented number of injured and maimed service personnel returning from the First World War. Sir William Macewen, an eminent Glasgow surgeon was the driving force behind the scheme to establish a hospital for limbless sailors and soldiers. He assembled a provisional committee of Scotland's finest business and medical minds to promote the scheme. 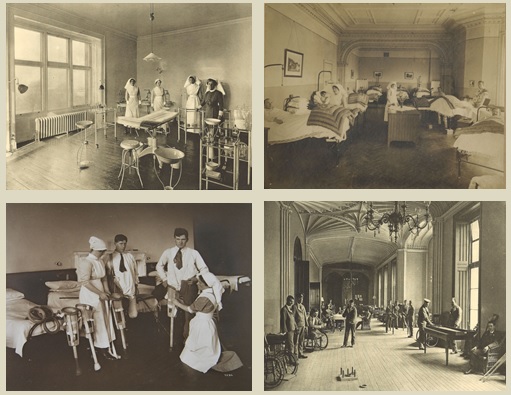 Sir John Reid bought Erskine House from Thomas Aikman and gifted it to the charity. Within 6 months the House was transformed into a hospital with beds to accomodate 200 patients. 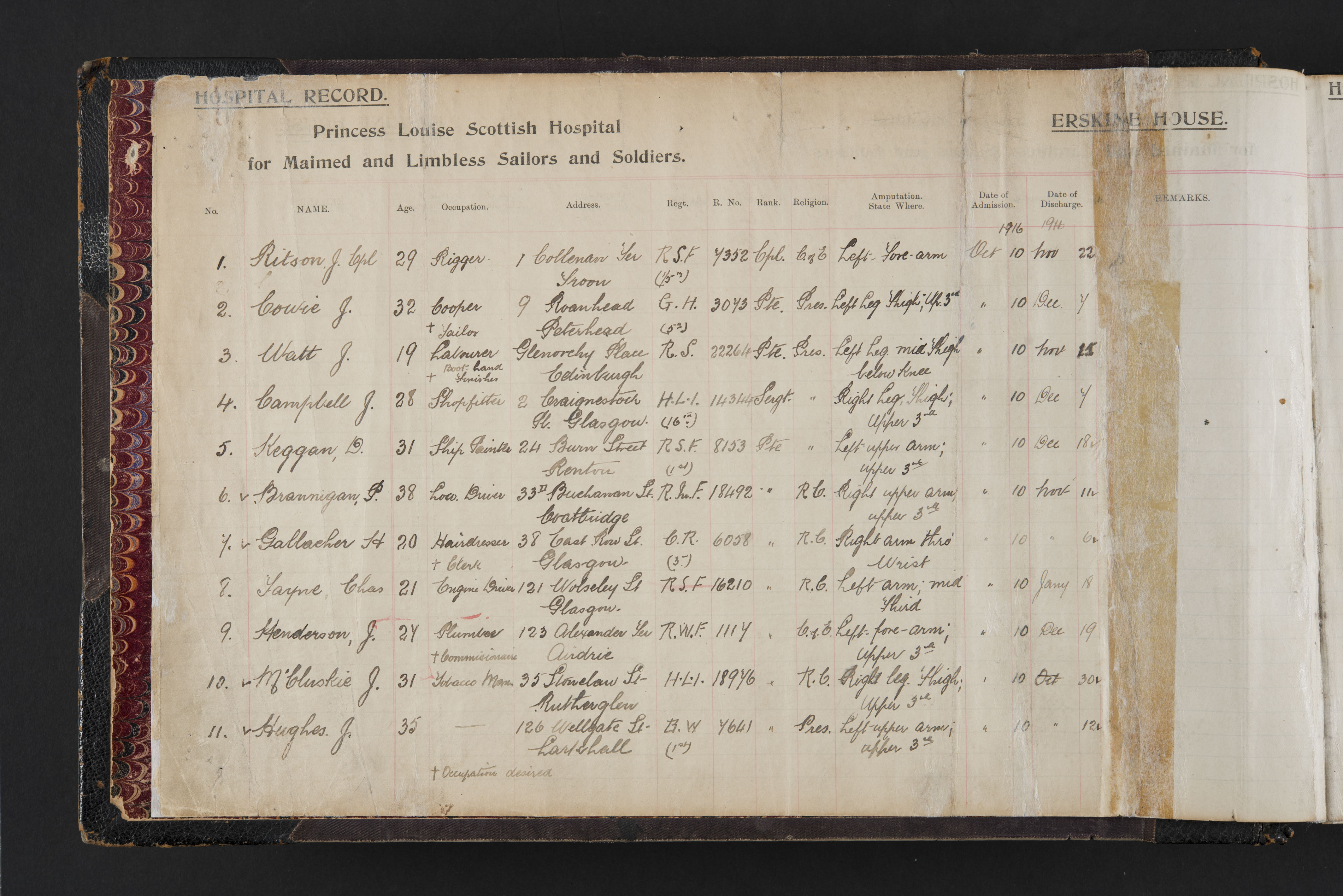 The hospital opened on 10th October 1916, by the end of that year 144 patients had been admitted. Within a few months of opening demand for beds grew and in November 1917 construction began on the ‘Red Cross Huts’, funded by the Red Cross which would accommodate a further 200 patients. 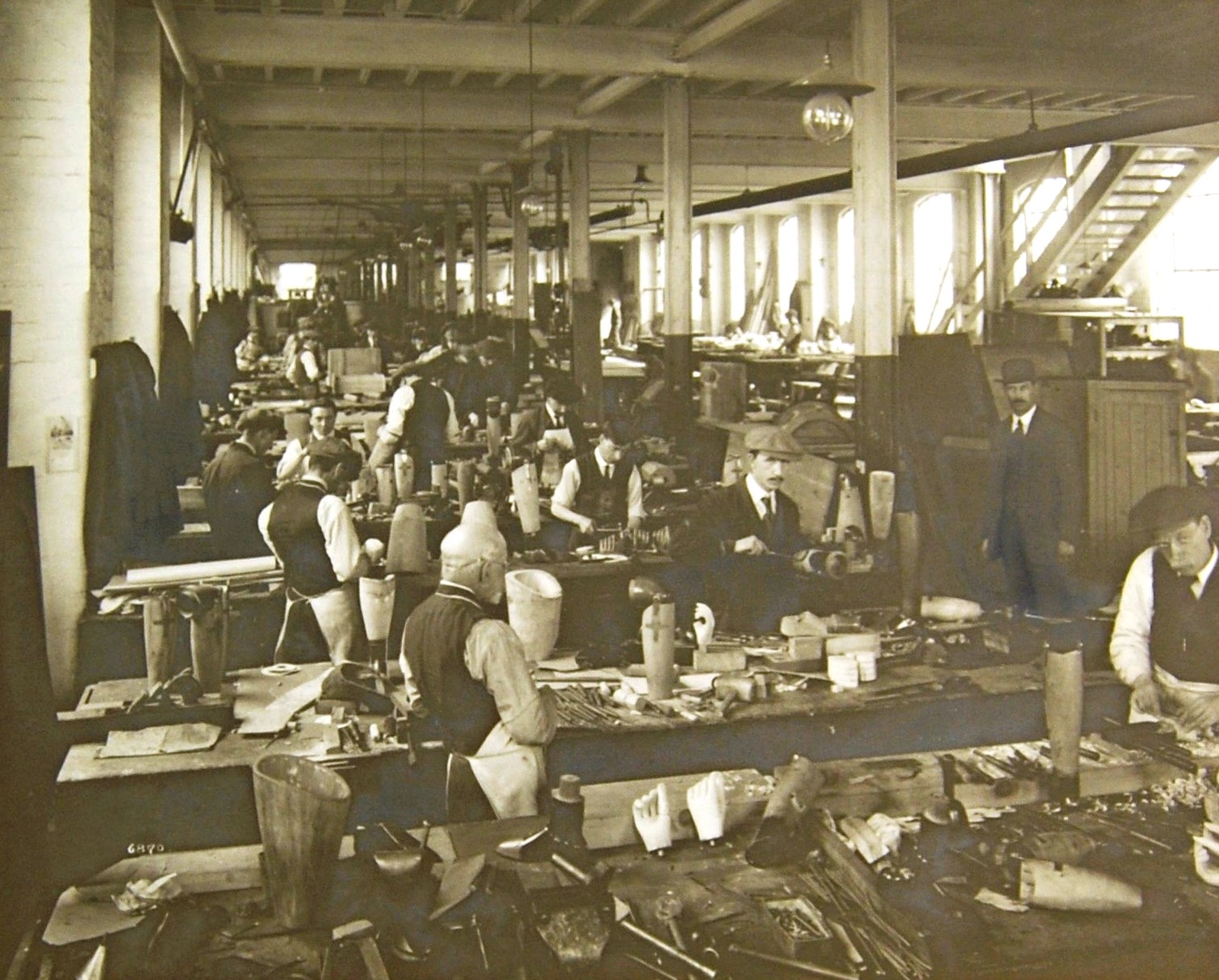 One of the main obstacles facing the new hospital was the shortage of artificial limbs in Britain. However the hospitals founder Sir William Macewen saw this as an opportunity to mobilise ‘Clydeside's creative genius’ and create a new industry in Scotland. Companies such as Yarrow &Co Ltd, lent their workforce to design and manufacture artificial limbs  at cost price for the hospital 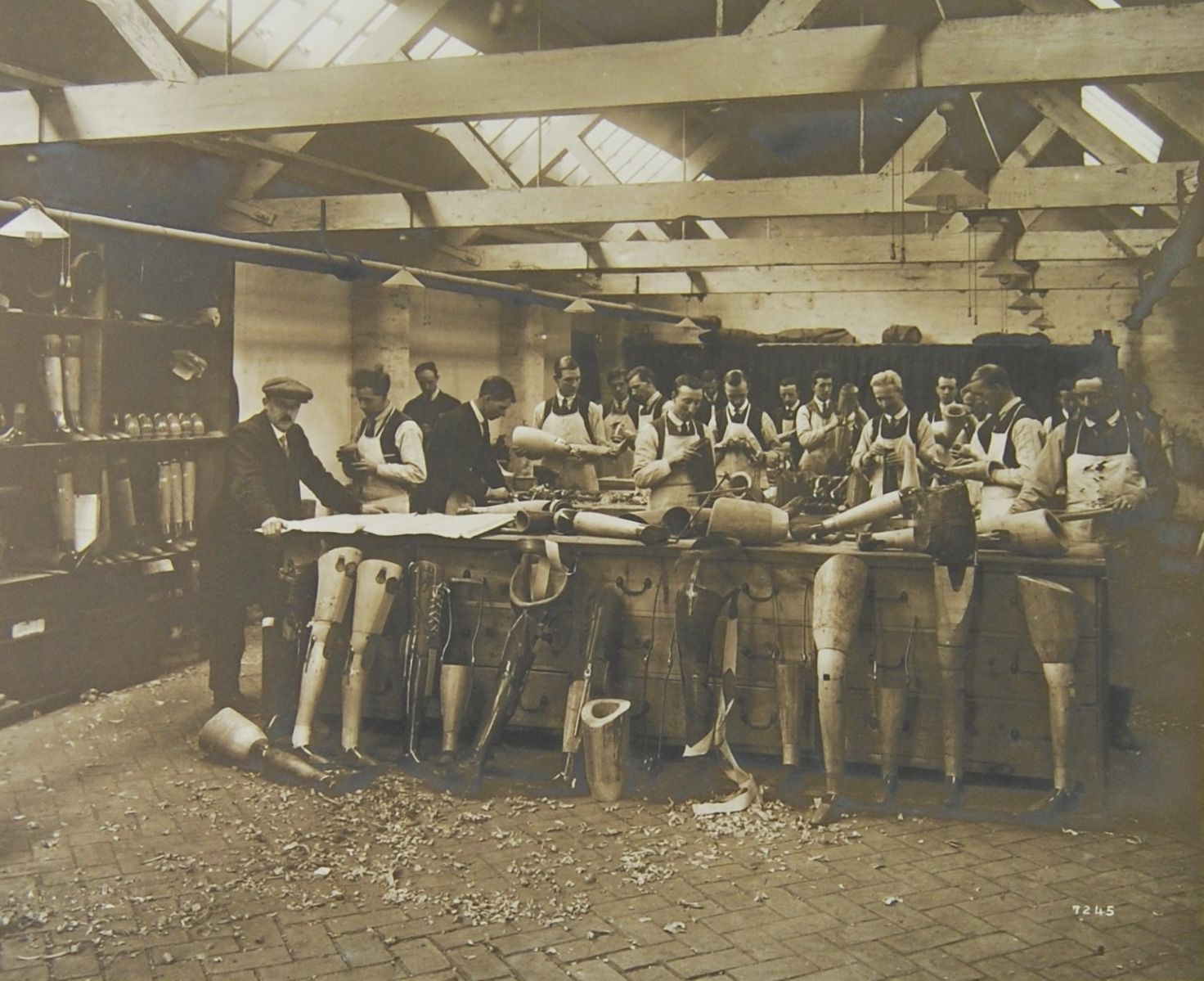 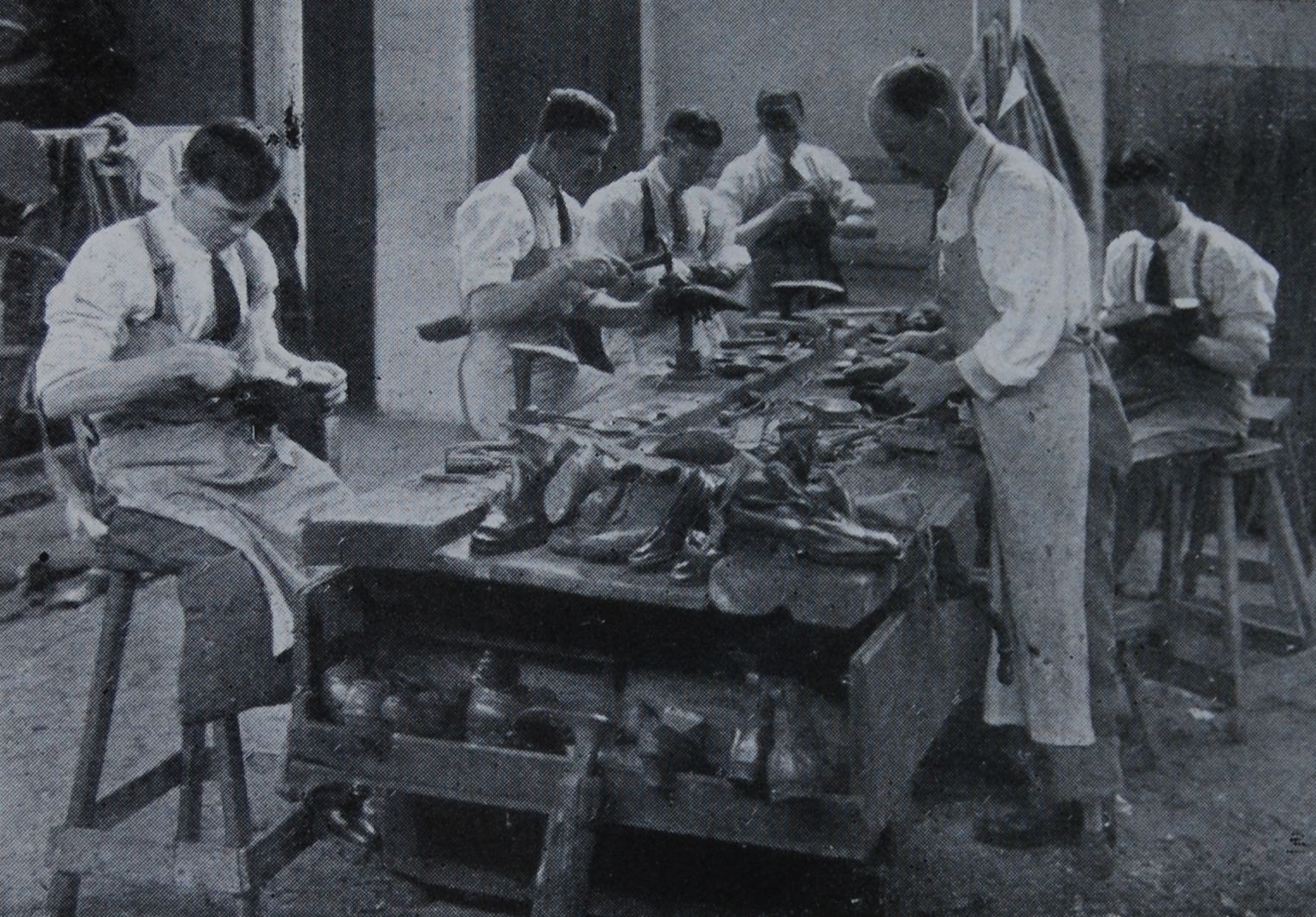 Workshops were also established for curative as well as vocational purposes. Classes were set up in basketry, shoemaking, tailoring, woodwork, hairdressing and commercial training. The idea was to give the men a variety of trades to choose from according to their tastes and ability to work and also to prevent any one trade receiving too great an influx 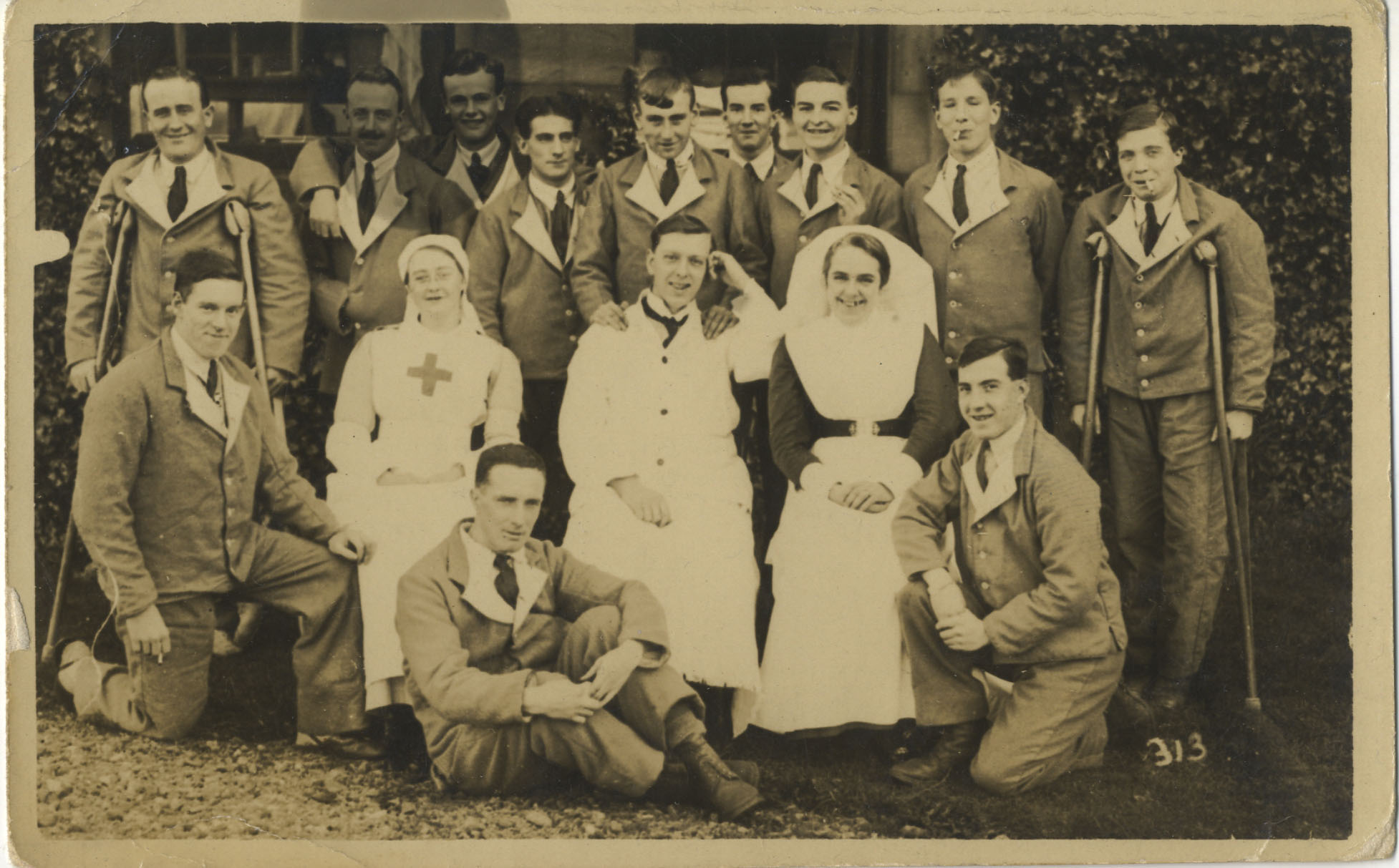 By December 1917 the number of patients admitted to the hospital was 1,613 and of those 1,126 had been “discharged with limbs”. More than 2,145 ex-service pensioners also attended Erskine to be fitted with new limbs or limb repairs. Between the opening in October 1916 and December 1919 over 400 major operations were performed. 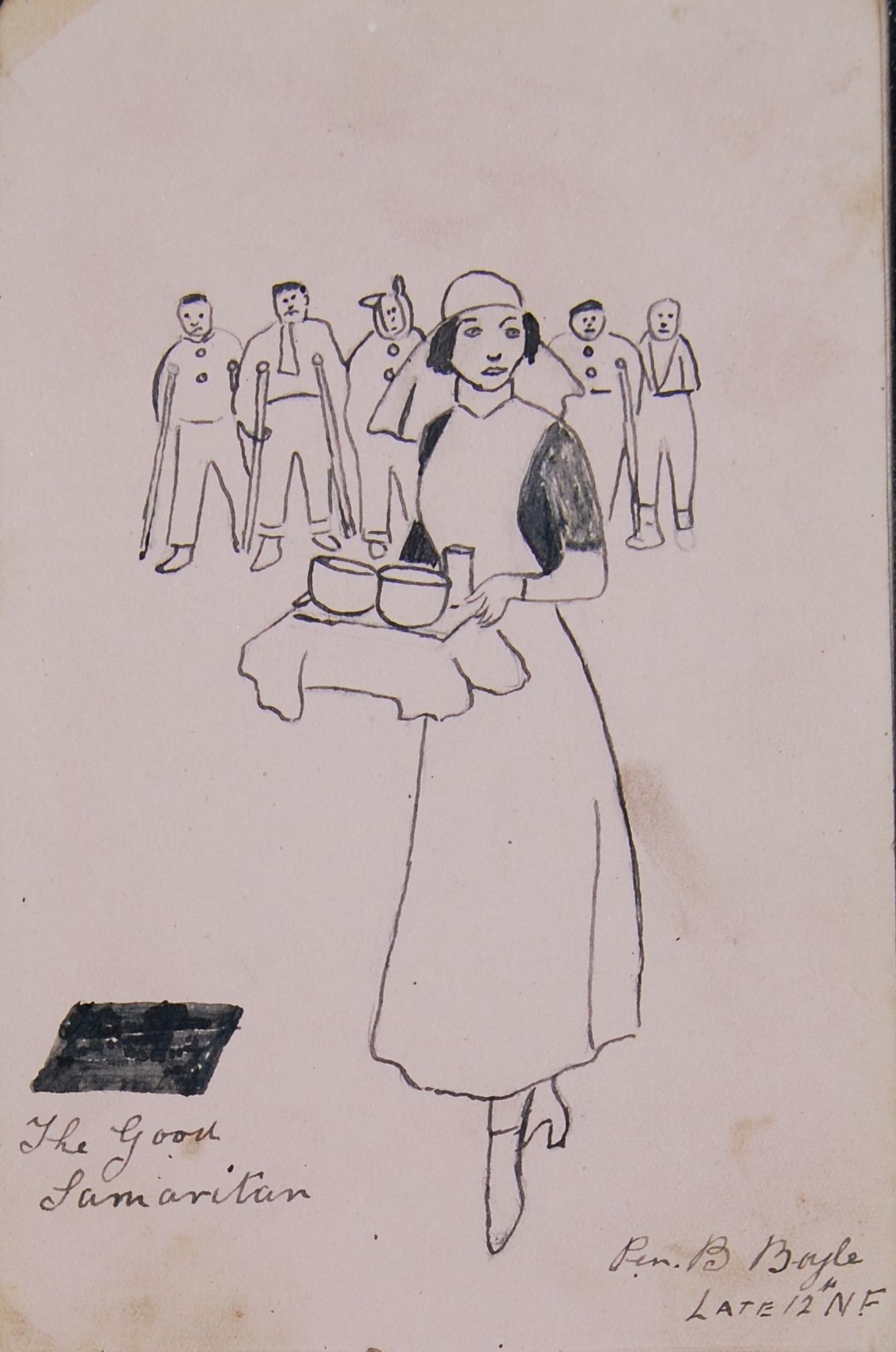 ‘To obtain best results sympathetic care and encouragement are required, besides advice and guidance’- Sir William Macewen 29 March 1916. The staff at Erskine took these words to heart creating a warm friendly atmosphere, in which patients and staff treated each other as family. 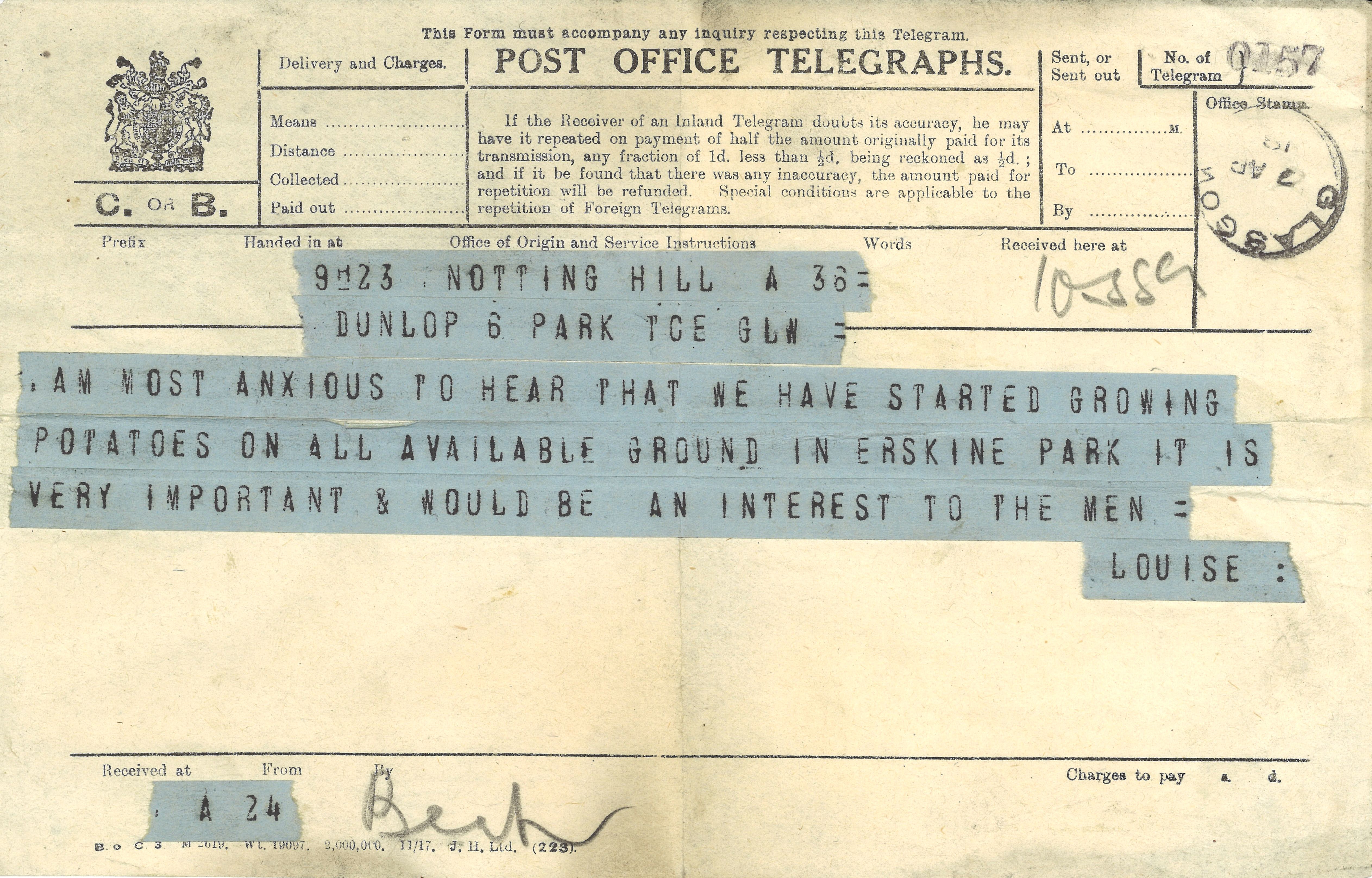 At the official opening of the hospital on 7th June 1917, the hospital's patron Princess Louise spoke of her ‘intense pride and pleasure to be asked to join the efforts here at Erskine’. She continued an active interest in the running of the hospital throughout her life and was a regular visitor there. 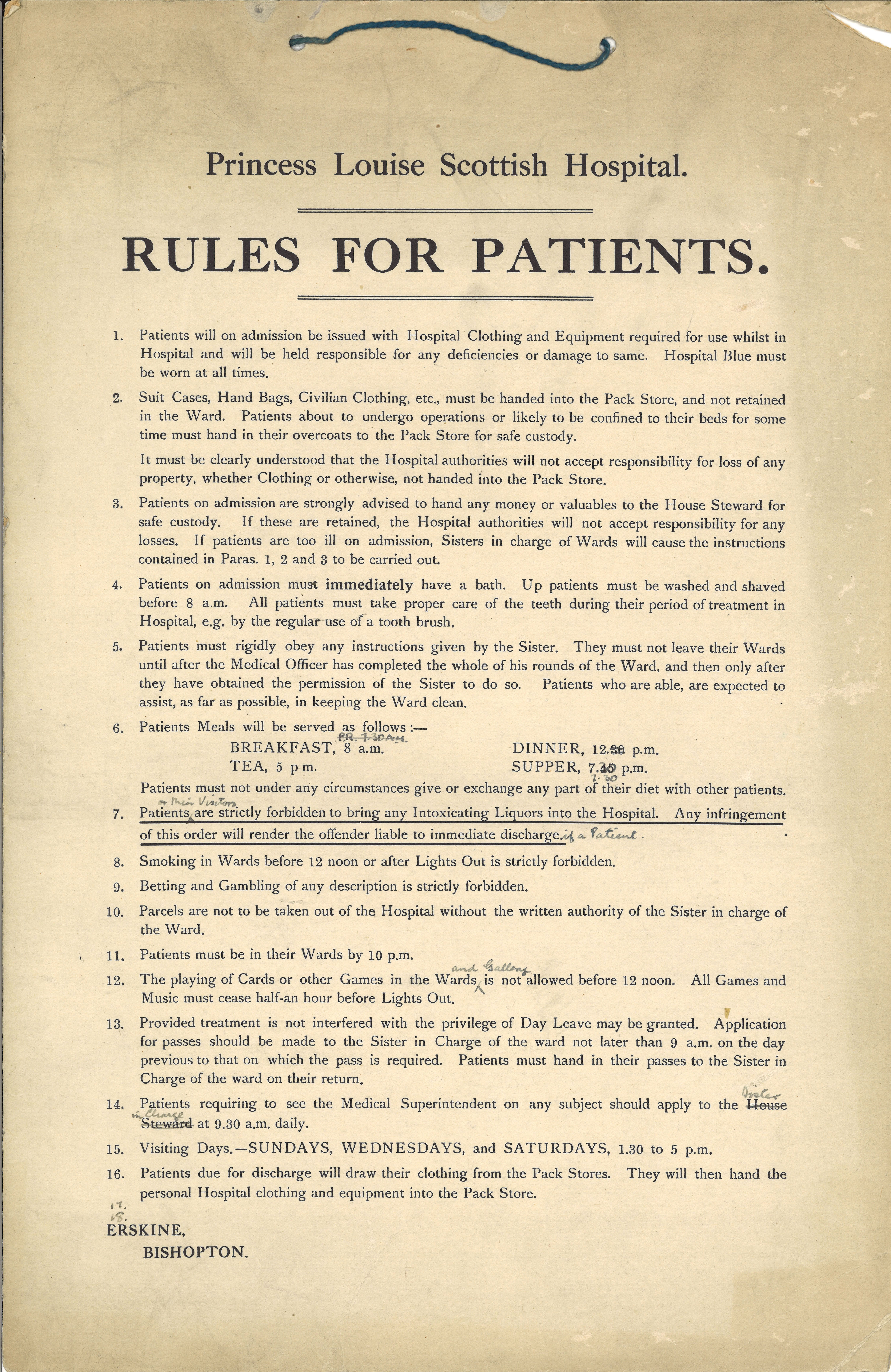 After the war the number of patients entering the hospital due to amputation naturally decreased. The Executive Committee shifted focus towards providing a permanent home for ex-servicemen requiring longterm care. 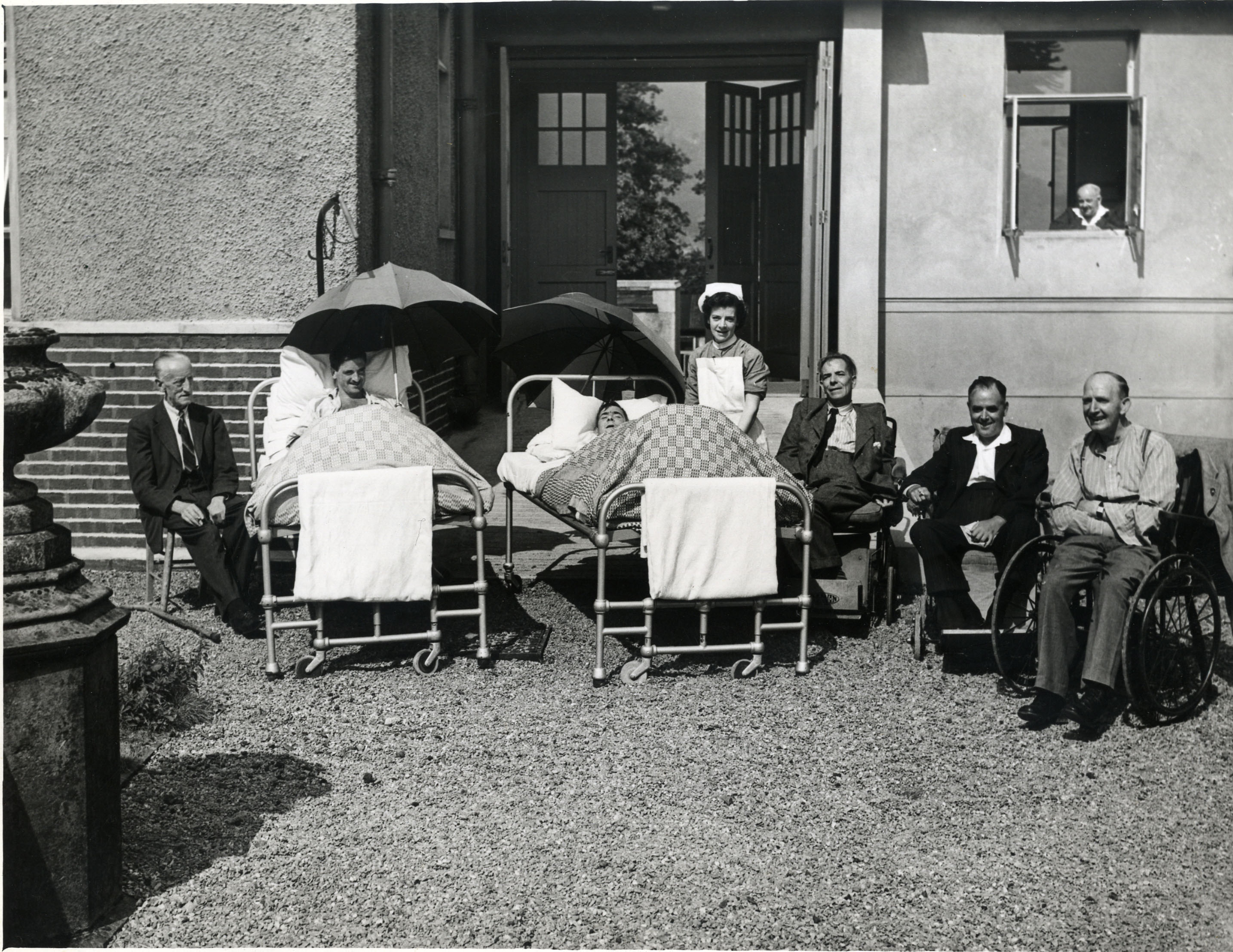 As well as being a busy functioning hospital Erskine became a permenant home for paraplegic residents unable to live independently. Additionally in 1934, a convalescent holiday scheme was introduced which allowed ex-servicemen who had been ill and could not afford to pay for a holiday to come to Erskine for a break. 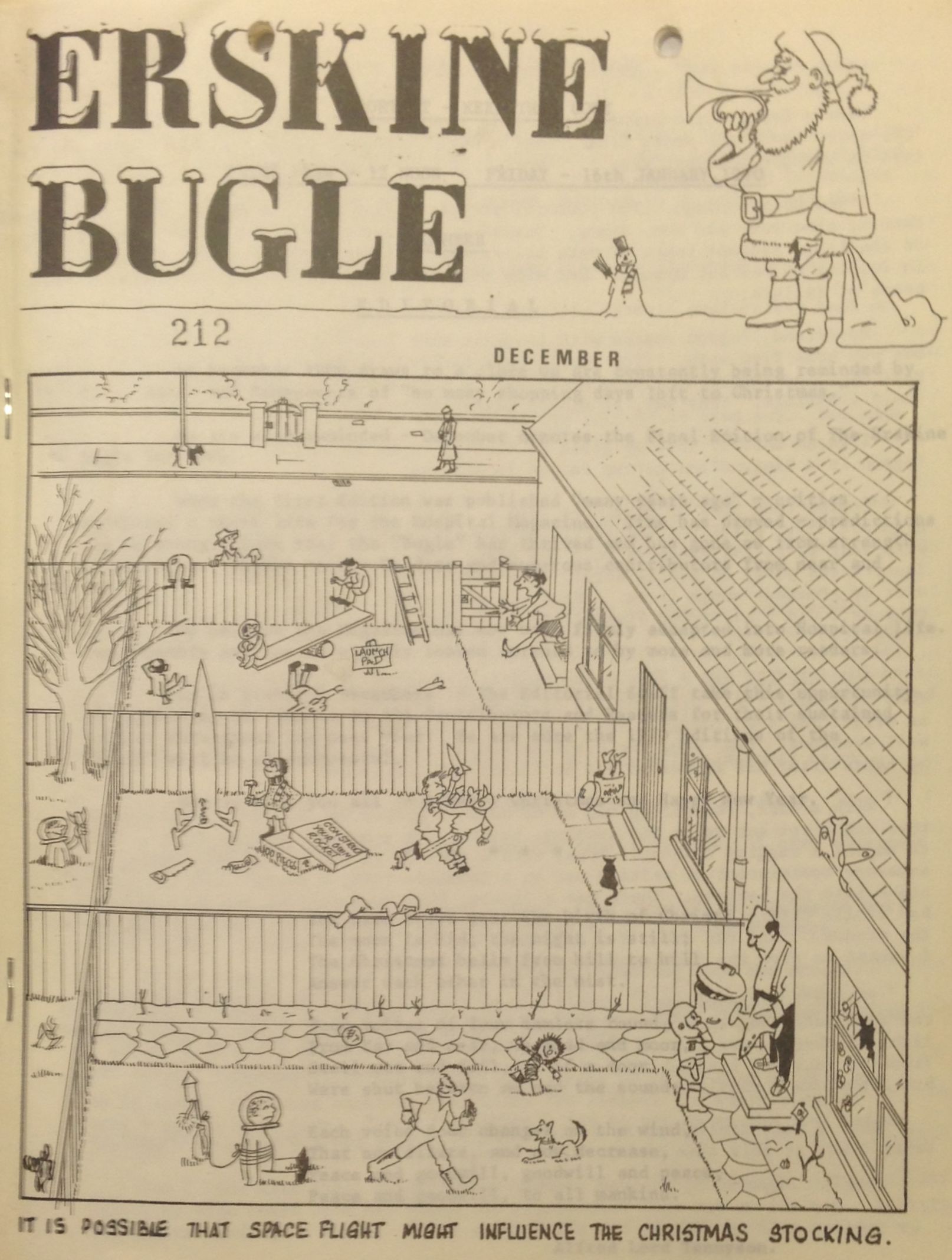 UGC225/8/19 'Erskine Bugle', a magazine produced my residents of Erskine 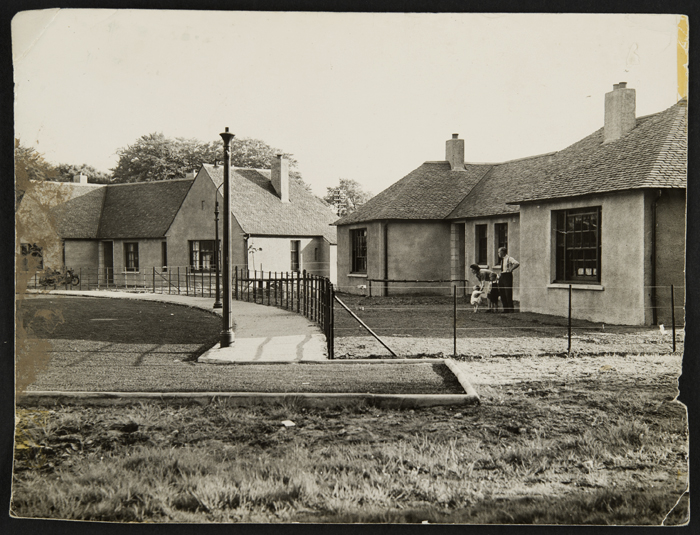 In September 1946 the first of 50 cottages was built in the grounds of Erskine, allowing disabled men and their families to live near their place of work and close to the hospital facilities on which they depended 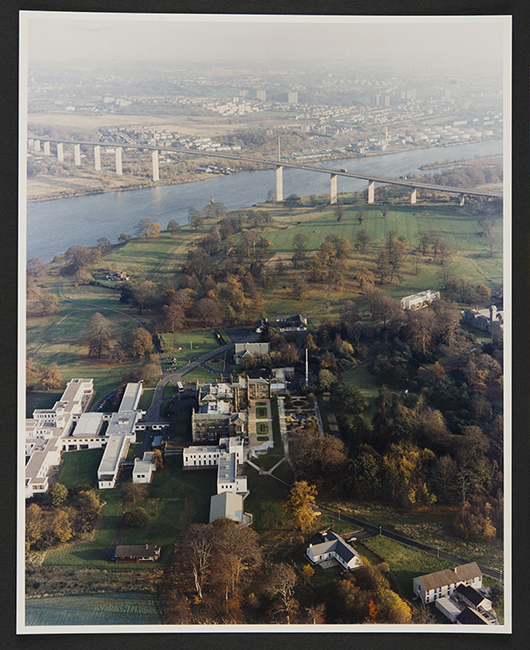 The hospital was continually being added to in the second half of the 20th century, with new wings being built in 1950, 1962, 1975 and the 1990s. However it was clear the 19th century manner house was no longer equipped to deal with the demands of the busy convalescence home. In 2000 the new state of the art facility was completed to provide long term residential care for veterans.