Castellani vs Bruce: the controversial discovery of the cause of sleeping sickness (1)

In the early 20th century a controversy raged within the international medical and scientific community. Point of contention: the endorsement of the discoverer of the causal agent of sleeping sickness, a deadly illness that was decimating the indigenous population in Sub-Saharan Africa. Ultimately, Scottish pathologist and microbiologist David Bruce went down in history as the man who identified the protozoan parasite Trypanosoma brucei as the cause of the disease. However, Bruce’s priority claim was fiercely disputed by a man who, for many, was the true discoverer of the cause: Italian physician Aldo Castellani. Just as other battles for credit on who discovered the modality of malaria transmission or, more recently, on who first identified the HIV virus, the controversy fueled fierce international competition and patriotic disputes.

The journey from London to Uganda took several weeks. The comforts of the large steamer cruising from Marseille to Aden soon made way for a far more cramped sailing trip to the port city of Mombasa, in the company of four hundred Arabian goats. From here, the members of the first British Sleeping Sickness Commission reached the heart of Africa in just a few days by means of the newly constructed Uganda Railway, which ran along the route that had previously been a three to four months' arduous trek undertaken by so many missionaries, explorers and slave traders. After arriving in Kisumu, on the north-east shore of Lake Victoria (then called Lake Nyanza), the group embarked on a further three-day steamboat trip across the lake to their final destination, Entebbe, the British headquarters of the Uganda Protectorate. 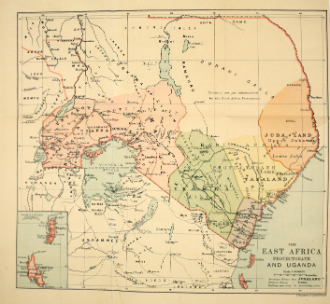 Dr Robert Unwin Moffat, Principal Medical Officer, and Colonel James Hayes Sadler, the colonial Commissioner and Consul General, were waiting for them at the pier. It was July 1902. The new arrivals were served food at the Consul’s house, the only tin-roofed building with glass windows among grass-roofed huts. Moffat had witnessed the building’s erection, along with the rest of Entebbe, when the town was established as the administrative capital in 1894. Nephew of the great Scottish explorer David Livingstone, Moffat had spent most of his life under African skies, first as the Medical Officer to the company building the Uganda Railway and then as Medical Officer of Uganda.

The conversation soon focused on the mysterious, dreadful disease, sleeping sickness (also called “negro lethargy”), that was decimating the local population on the shore and islands of Lake Victoria. The disease had an insidious onset and sufferers presented with weakness, frontal headache, drowsiness, glandular enlargement and an irregular fever. Over time they became unable to walk or speak properly. Their bodies became bloated and puffy and they developed the typical "moon face" due to oedema. After suffering for approximately five to six months, the urge to sleep became overwhelming. Mental disorders and emaciation ensued, and victims eventually slipped into a coma and died.

Sleeping sickness was a life sentence, but no one knew its cause. Wildly differing hypotheses circulated. Some thought the disease originated from emotional distress connected with slavery; others proposed sunstroke, whilst others suspected an extreme manifestation of beriberi or food poisoning. Some, influenced by the germ theory of disease and the recent discoveries of the causes of tuberculosis and malaria, suggested it was linked to an infection with some microorganism.

By the time the first Sleeping Sickness Commission arrived, tens of thousands had already succumbed in the Busoga province, where the disease had been first recognised only the previous year. An astonishingly rapid spread! As David Bruce later wrote “in a short time [sleeping sickness] reduced a populous and richly cultivated country to a depopulated wilderness”[1].

The matter was extremely serious, as the outbreak compromised the availability of African labour and was threatening the habitability of the area. The economic consequences of the disease were clearly a concern for the British Empire, while perhaps the humanitarian impact was less considered. Moreover, there was widespread fear that the infection could spread to other colonial territories, particularly to India, the "Jewel in the Crown", with catastrophic consequences. Indeed, many believed sleeping sickness to be communicable and contagious between people and the creation of isolation hospitals offered the only available solution to colonial health authorities.

Sleeping sickness was, however, nothing new to Africans who had lived with it for centuries. The Atlantic slave trade and colonial rule had already demonstrated its deadly effects to Europeans too. However, prior to the early 20th century, the disease had only been known in some areas of West and Central Africa (mainly the Congo basin) and epidemics on the scale of the one seen in Uganda had never been recorded. It was actually not just Britain's dominions that were witnessing the disease’s rapid spread. All colonial powers in East and Central Africa – the Portuguese, French, German and Belgian governments – had to contain outbreaks during the first part of the 20th century[2].

What European powers failed to recognise, at least initially, was that the epidemics were triggered by colonial rule itself. Increases in trade, coercive movement of indigenous people, agricultural shifts and ecological disasters such as drought and famine, all served to escalate the risk of the disease by increasing the likelihood of human contact with what we now know to be its vector, the tsetse fly.

Soon enough the need to discover the nature and cause of sleeping sickness became a matter of economic, political as well as scientific concern. National prestige and supremacy too were at stake. Hence, the colonial overlords of affected territories each sent expeditions to study the matter. Between 1901 and 1914 as many as seventeen scientific and government commissions were launched to carry out field work in Africa. One of the earliest efforts was the first Sleeping Sickness Commission, dispatched by the Malaria Committee of the Royal Society in London. Its mission was to study the Ugandan outbreak, identify the causal organism and understand its transmission. This basic knowledge was essential if control measures could be put into place. After all, the discovery by Ronald Ross in 1897 that malaria was transmitted in birds by mosquitoes, and its confirmation in humans by the Italian Giovanni Battista Grassi in 1899, had allowed unprecedented action to be taken towards stopping the transmission of the Empire’s most dangerous foe.

By May 1902 the members of the British mission had been appointed. The Royal Society had found it near-impossible to put together a team of highly experienced investigators. Instead, it was a small commission of relatively young (and some believed, ill-prepared) scientists who were dispatched to Uganda. The commission was led by George Carmichael Low, a Scottish parasitologist from the London School of Tropical Medicine. The school had been recently established by Patrick Manson, who suggested Low himself. Low was a physician, who had participated in both Manson’s malaria studies in Italy and in his work on filarial worms in the Caribbean. He had been able to demonstrate that human infection with filariae occurred via mosquito bites and not by ingestion of mosquito-contaminated water. Low also proved that Europeans could avoid malaria by sleeping in mosquito-proof houses, as he did himself for three months in the notoriously Plasmodium vivax-endemic Roman Campagna.

Cuthbert Christy, an epidemiologist, was to lead the mission’s fieldwork. Although born in England, Christy, like Low, had studied at the University of Edinburgh where he had developed a keen interest in zoology. He was a skilled naturalist who had travelled to both South America and Northern Nigeria and had worked on plague in India. Unfortunately for the commission, Christy was endowed with a belligerent and arrogant personality, which caused his relationship with Low to deteriorate rapidly. According to one report, finding a label on their carriage in the train from Mombasa that stated “Dr. Low and party”, was enough for the enraged Christy to pick a fist fight with Low[3]. They barely spoke or saw each other for the remainder of their stay in Uganda and Christy spent most of his time trekking across the Protectorate.

In the field - Sleeping Sickness Commission

The third and final member of the expedition was an obscure Italian bacteriologist. Like Low, he was from Manson’s London School, which he had joined only a few months earlier. His name was Aldo Castellani. Castellani was a cultured man, born in 1874 into a wealthy Florentine family. Against the will of his father, who wanted him to work in his vineyards, he went on to study medicine in Florence. After qualifying, he furthered his microbiology training at Bonn University under the famous professor Walther Kruse. In 1901 he left Bonn for London. A few months after his arrival he was offered an opportunity he could not refuse. Manson needed a third person to join Low and Christy, and asked for a volunteer for the mission at the end of one of his lectures. Many were interested. In order to select a volunteer, Manson set a competitive examination that the young Italian graduate won.

Castellani later wrote in his autobiography “I had always wanted to go to the Tropics, and I thought my chance had come”[4].

[4] Castellani A. Microbes, men and monarchs: a doctor's life in many lands; the autobiography of Aldo Castellani. Gollancz, London, 1960, p. 29