I’m not ubi-quitin yet: translating “ubiquitination” into simple language

Ubiquitination, difficult to say, tricky to spell and, just to add a little more complexity, can also be known as ubiquitylation or ubiquitinylation. These terms aren’t easy for our minds to process and probably resulted from mis-pronunciation, misspelling or mis-hearing in the first place (the researchers can debate which came first). Luckily for us, our cells, can translate it into some sense on a daily automatic basis without us having to think about it. But what is ubiquitination apart from a rather long ‘science-y’ word?

Ubiquitin is a protein that is found in most cells and tissues. Since it is found just about everywhere, the word ubiquitous was modified to create its name and the names of the complex processes in which it is involved. This protein is a bit like a dementor for those Harry Potter fans out there, in that it performs the “kiss of death” to other proteins when it captures them. When ubiquitin attaches to another protein it effectively prevents this protein from functioning and signals that this unlucky protein is to be destroyed. Ubiquitin then takes its prisoner to the proteasome (Azkaban), a protein blender that chops it up into lots of little pieces known as amino acids that can then be re-used to construct new proteins. Amino acids are thus similar to Animagus wizards and witches, in that they can transform into many different proteins via construction and degradation activities. It’s a bit like magic only real!

But why do we need ubiquitination? Firstly, our cells occasionally make a mistake when making a protein and need to be able to destroy it. If this did not happen and dodgy proteins built up inside us, it could lead to disease. Secondly, we only need proteins at certain times. For example, we need different levels of insulin (the molecule that stores glucose) and glucagon (the molecule that releases glucose into the circulation) at different times to regulate our blood sugar levels. Therefore, if we have too much sugar in our bloodstream and we need insulin, glucagon must be degraded otherwise it will counteract the function of insulin and make us unwell. Thirdly, ubiquitination helps us conserve energy if our bodies are to re-use and re-cycle proteins and amino acids. It just makes more sense to re-utilise everything than to discard everything as waste and replenish our intake through food and re-start from scratch all the time.

So what does ubiquitination have to do with parasite research? Leishmania parasites (Voldemort and his death eaters) cause an unpleasant disease called leishmaniasis which manifests as large unpleasant skin lesions, deformation of skin especially of the face, and swelling of internal organs which can lead to death. There are some drugs available to treat this devasting infection however, there are few, they can be quite toxic and unpleasant in themselves, and the parasites are developing resistance against them allowing them to evade death. We are in urgent need of new effective treatments and this is where ubiquitination could come in. There are many different types of ubiquitination and some types are unique and essential for the survival of Leishmania parasites. The idea is therefore to try and create drugs able to target this process to specifically prevent ubiquitination in Leishmania. This would mean the drug would kill the parasites without causing damage to the host (human or animal) system. Researchers are thus carrying out experiments on Leishmania ubiquitination processes in the hope that one day this idea will become a reality so that leishmaniasis can be cured and eradicated as a global health problem. 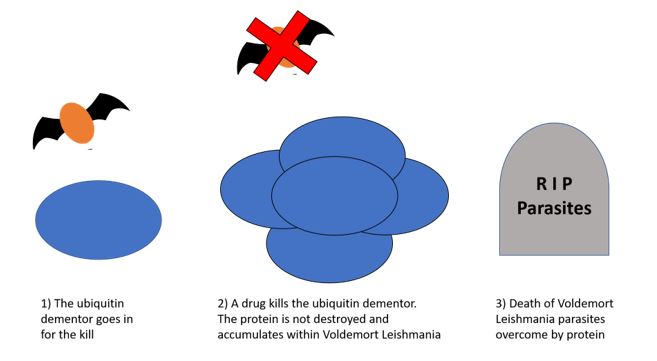 So, if u(‘ve-not)-bi(n)-quit-in and read all the way to the end you can now hopefully impress all your friends by explaining the definition of ubiquitination or ubiquitylation or ubiquitinylation…and the role it has in research in the fight against parasitic diseases.