CRISPR/Cas: How an ancient defence mechanism benefits our research in present day

To have a look at the origin of CRISPR/Cas we must go back to bacteria. CRISPR/Cas is a natural defence mechanism that bacteria use to fight off viral infections. Viruses are organisms that can infect a variety of hosts including humans and bacteria. They multiply within the host’s cells and, eventually, destroy the host cell by bursting out. Multi-cellular organisms like humans can potentially cope with losing a couple of their cells. Bacteria, however, consist of only one single cell so that every viral infection would eventually lead to the destruction of the entire organism. The CRISPR/Cas defence mechanism keeps bacteria alive by preventing viruses from multiplying within the bacteria.

How does CRISPR/Cas do that exactly?

To fully understand how the CRISPR/Cas defence system works in bacteria, we should quickly take a look at how viruses replicate within a host cell. Viruses cannot manufacture proteins from their genetic material like other organisms. However, proteins are still critical for their survival and comprise the building blocks that make the viral outer shell. Viruses have responded to this problem by hijacking the host cell’s replicating machinery and forcing it to produce proteins for them. The virus injects their genetic information into the host cell and the host organism then translates the viral genetic information into viral proteins which form new viruses. Once enough viruses have accumulated, they rupture the host cell to infect new cells.

To keep viruses from replicating, the CRISPR/Cas system relies on the two principals of (1) recognizing viral genetic information and (2) destroying it. By doing so, viruses cannot accumulate and the bacterium survives. Viral genetic information that was introduced into the bacterium is destroyed by Cas enzymes. Cas enzymes are bacterial proteins that specialise in cutting and, thus, destroying genes. Hence the name ‘gene scissors’. But how do Cas enzymes recognize viral genes? At the end of the day, genetic information is all made up from the same basic code. As a result, distinguishing between your own genes and foreign genes is not that trivial.

This is where the CRISPR part comes into play.

CRISPR stands for Clustered Regularly Interspaced Short Palindromic Repeats. I know - it’s a mouthful. That’s probably why I have to look it up every time I have to write it down, and I am working with CRISPR/Cas.

CRISPR is a space where bacteria store parts of viral genes like in a library. These partial genes were acquired during either previous or the early stage of acute viral infections. Bacteria are able to multiply these sequences and attach them to Cas enzymes. The Cas enzymes then scan all genes within the bacterium. Only if a gene has a sequence identical to the ones in the library is the Cas enzyme activated and cuts the gene. With this strategy, bacteria make sure that their Cas enzymes do not cut their own genes, but only viral genes. This accuracy is essential as the destruction of their own genes would lead to the death of bacteria.

It is important to note that CRISPR/Cas is an overall adaptive system. It allows bacteria to store information and to remember previous infections. It also enables bacteria to acquire an ever-expanding catalogue of viral sequences that help it to fight off future viral infections.

How do scientists apply CRISPR/Cas?

One of the major challenges in life sciences is to understand biological and medical processes on a molecular level. For example, at the WCIP, we are investigating how certain parasites can infect humans and make them ill. For this purpose, we have to gain knowledge on how parasites are able to infect humans and survive within their host. Often, scientists modify or delete genes in parasites to identify proteins that are involved in these processes. When a specific protein is found to be responsible for a certain parasite process or action, scientists can develop drugs or vaccines against this protein.

Modifying or deleting genes in parasites is often a key requirement for scientific progress. Therefore, numerous methods have been developed to accomplish this and, as time goes on, scientists can choose from an ever growing pool of applications to investigate their gene of interest.

Although CRISPR/Cas is a bacterial system, scientists can use this method to cut genes within parasites. The Cas enzyme is introduced into the parasites together with a gene sequence that is identical to a one of the parasite’s genes (Figure 1). 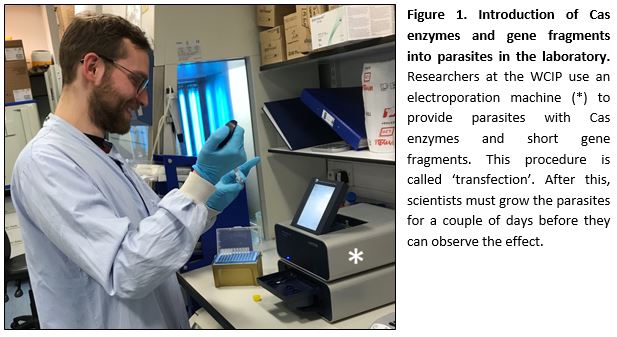 The Cas enzyme then finds that specific gene within the parasite and cuts it (Figure 2). As a consequence, the parasite loses that gene’s function and scientists can examine its role in parasite survival.

So what is so special about CRISPR/Cas?

In contrast to other organisms, lab-based gene modification of parasites has been challenging. This has had an impact on our understanding of their biology and our tools for fighting parasite-derived disease in humans. Since millions of people suffer or die from parasitic infections every year, new ways to prevent infection or fight existing disease are desperately needed. The CRISPR/Cas system offers the possibility to investigate parasite biology in greater depth and with more accuracy than was previously possible. On top of that, in contrast to many other techniques, CRISPR/Cas enables us to investigate the functions of multiple genes at once. These screening approaches speed up research tremendously.

This new technology has had a tremendous effect on many areas within the life sciences. Who would have thought that parts of the bacterial immune system, that has been existing for millions of years, would one day have such an impact on our daily research?