Most people probably know bacteria as germs that can cause disease in humans. It is very true that some bacteria can cause diseases that range from the common cold to very serious conditions like tuberculosis. The plague is also caused by bacteria. However, this is just half of the truth and not all bacteria are harmful to us. As matter of fact, some can actually be very useful and essential to our survival. On top of that, they are also crucial for biological research. Although we work on a completely different cell type called eukaryotic cells here at the WCMP, we rely on bacteria every day for our research. But let’s start from the beginning.

Bacteria are organisms that consist of only one cell. In comparison, we humans are made of millions of cells. This is the reason why bacteria are tiny compared to us. In fact, bacteria are so small, that you cannot see them with the naked eye. Scientists can only make them visible with the help of a microscope. There are different species of bacteria that come in a vast variety of shapes (see figure 1). Some are round like a ball, while others look like very thin sticks. There are even bacteria that are shaped like a corkscrew. Bacteria have mastered the art of survival. They live in the deepest oceans and some species can endure environments that are way too harsh for us humans to survive in. You see the term “bacteria” covers in reality an enormously large number of different organisms that are as different to each other as a blue whale to a rabbit. 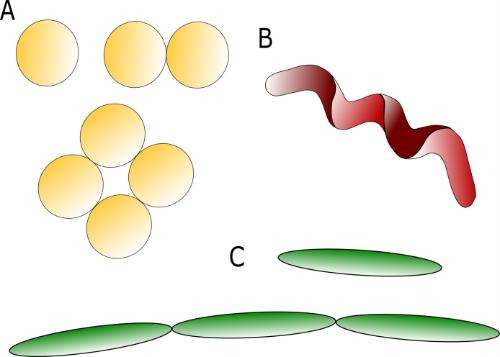 Figure 1: Examples of shape variety in bacteria. Some bacteria are as round as a ball (spherical) and can appear on their own or clustered together with other round bacteria (A). These bacteria are called Cocci (singular: Coccus). Spiral bacteria have a corkscrew-like body (B) while rod-shaped bacteria (Bacilli, singular: Bacillus) appear perfectly straight and can form long chains (C). Some bacteria can be very harmful for humans. For example tuberculosis is caused by a rod-shaped bacterium called Mycobacterium tuberculosis.

Are all bacteria harmful?

No, as I stated already, not all bacteria are harmful to us. In fact, we humans depend on certain bacteria, as they are crucial to our well-being. For example, millions of bacteria live in our digestive system and help us to digest the food that we eat. Have you ever wondered why people sometimes suffer from diarrhoea when taking antibiotics? This happens because the antibiotics do not only kill the illness-causing bacteria, i.e. the one that are giving you a cold, but also the useful bacteria that colonise your gut. Without their support, your body has trouble digesting food properly and you might end up having diarrhoea. From the bacteria’s point of view, we are an enormous habitat to live on and in. A fun fact at the end of this section: There are ten times more bacteria living in or on us than the number of cells we are made of. Yeah … let that sink in.

But why are they so fundamental to research?

So far we discussed that bacteria can be harmful, but also essential to human survival. Now, what makes them also crucial for our research? To answer this question, I will have to quickly explain in more detail what kind of research we do at the WCMP. We focus predominantly on the molecular aspect of life science and medical research. This means that our researchers are interested in the building blocks, called proteins, which make up a cell. Proteins fulfil various tasks within a cell and can thereby determine its properties.  The type of cells we are interested in are called eukaryotic cells. They are different from bacterial cells in that they are larger and more complicated.

All cells know when to produce a given protein due to their genes. Genes provide the cell with a unique code for each protein.  Cells can read and use this code to generate the respective protein when needed. To understand how a cell functions, researchers have to understand how every single protein within that cell functions. To investigate a protein’s function, we often alter the protein by manipulating its genetic code within the cell. For this purpose, we have to provide the cell with an alternative version of the protein’s gene. However, since gene modification is naturally fairly inefficient, we have to offer the cell a lot of copies of this one particular altered gene for it to be accepted by the cell.

And this is the point in every researchers work when bacteria become indispensable.

Bacteria are a special type of cell that is extremely efficient in accepting and multiplying genes from other organisms. Therefore, before we can provide our eukaryotic cells with our modified gene, we have to multiply this gene in bacteria (see figure 2). In other words, bacteria are crucially required for the first step of almost every experiments and scientific discovery. Without the bacteria multiplying genes for us, we would not be able to dissect any protein functions. This is why scientists often refer to bacteria as the work-horse of molecular biology. And bacteria can do even more for science. Bacteria are also capable of multiplying eukaryotic proteins themselves. This allows researchers to isolate the protein in high quantities and perform structural analysis. 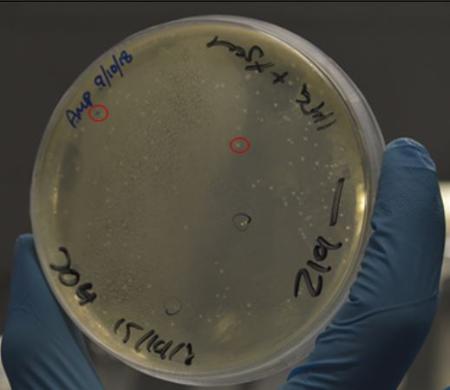 Figure 2: How researchers grow bacteria to amplify genes. To make bacteria amplify genes for us, we grow them on a highly nutritious substance. Researchers have special dyes to determine which bacteria are amplifying the gene of interest and which are not. In this example, the white dots (called colonies) represent bacteria that are producing our gene while blue colonies do not (see red circles). It is important to note that each colony is made up of millions of bacteria. Only when such a high number of bacteria are growing together in one spot, they are detectable with this naked eye. Image taken by Helena De La Torre Olvera.

Anyway, this shall be all for this article. I hope I was able to convey that bacteria are highly connected to human life. In addition, certain types of bacteria build the foundation of any molecular research laboratory.

Speaking of research, I am sure my bacteria should have finished amplifying that gene for me by now … 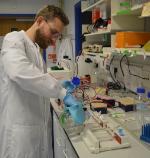 Johannes Felix Stortz is final year PhD student in the laboratory of Professor Markus Meissner. His research focuses on the life cycle of the apicomplexan parasite Toxoplasma gondii, in particular, the structural protein actin.