Three virologists, two parasitologists and an environmental economist walk into a festival bar…sounds like the start to a pretty nerdy joke. However, these six scientists travelled in a minivan from Glasgow to Brecon in South Wales to engage new audiences with their research at The Green Man Festival, an annual music extravaganza that draws a crowd of over 20,000.

The Green Man Festival itself has a very relaxed and family friendly vibe with specific areas of fun and activities for young children and teenagers as well as multiple music tents and even outdoor hot tubs – no wonder it sells out every year. In 2018 Green Man celebrated the 10th anniversary of the science specific area called Einstein’s Garden, and as Albert Einstein once said: “Creativity is contagious – pass it on”.

With that in mind the Wellcome Centre for Molecular Parasitology took its Crafty Critters activity, a hands-on parasite making activity, to the festival. We were joined by the Centre for Virus Research who showcased their Art Goes Viral colouring book. These activities complemented each other extremely well. We were able to engage festival goers with a range of different parasites and viruses, and what makes them successful at infecting so many of us. We also highlighted the research we are carrying out at the University of Glasgow in order to better understand (and fight) them. 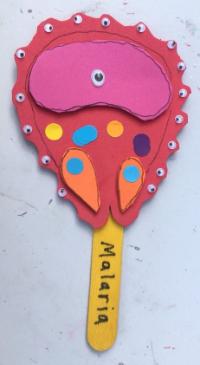 As the festival was in Wales, most of the people passing through Einstein’s Garden were from Wales or the South of England. However, we did get some visitors from The Isle of Mull and the Highlands (go Scotland!), whilst others were from as far afield as Switzerland, the Netherlands, Thailand and even New Zealand.

One of the pleasures of public engagement work is speaking to people who initially had no idea what a virus or a parasite was - but by the end of the activity, were passing on the cool stories they learnt to their friends or families about the parasite that infects cats, or how the flu virus changes all the time which is why we need the vaccine annually.

We met kids who were just interested in the ‘grossness’ of parasites (they’re not gross, they’re beautiful!) and others who wanted to cure diseases. One young boy exclaimed “Toxoplasmosis! That’s my favorite parasite!” His mother then responded “I had no idea he had a favorite parasite..” We also met many people who had been infected with parasites, so it was great discussing where they had been, what they been infected with, and how they had been treated. One mother with her daughter commented on ‘how wonderful it was to meet female scientists and know that we can do it too!’ Three girls (about six to eight years old) turned up every day to make yet another parasite.… We ended up doing a charades quiz with them guessing if we were sleeping sickness, malaria, toxoplasma or schistosomiasis! Full marks ladies.

Whilst the festival was incredibly hectic, it was a brilliant way to engage with a lot of people that we wouldn’t normally have any contact with so far from our home turf of Glasgow. Those who visited us walked away with some new knowledge and insight about the parasites and viruses we love to research. Hopefully, we have aroused the curiosity of some of our younger visitors and may have inspired some budding scientists of the future! 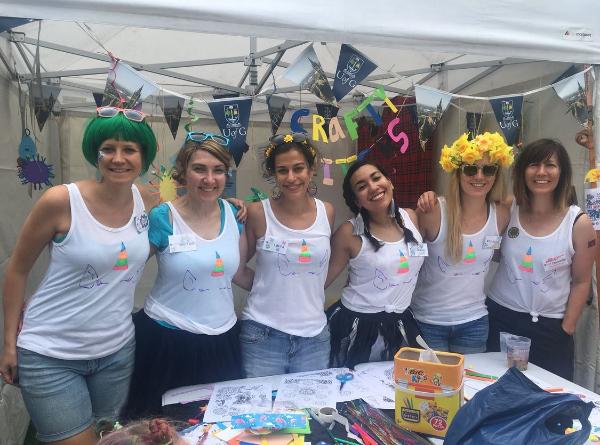 Participation in this event was funded by the WCMP and the MVLS Public Engagement Fund.