Engaging Communities About Research Through Community Led Performance: Schistosomiasis and Acting for Health.

Schistosomiasis is a neglected tropical disease thought to infect around 240 million people across the globe. The parasite that causes this disease has a complex lifecycle involving stages in a human host, and in a freshwater snail vector.  Humans become infected when they are exposed to the parasites while swimming, bathing, or fishing in water into which infected snails have released human-infective parasite forms. Schistosomiasis causes substantial morbidity, and in some areas, it has become increasingly difficult to break the infection cycle. The Lamberton Lab (where I am a PhD student) carry out research to understand the nature of the disease’s transmission, and to find ways of breaking the cycle of infection.  While we are based at the Wellcome Centre for Molecular Parasitology at the University of Glasgow, we regularly conduct fieldwork in Uganda.

During March 2018, members of the Lamberton Lab set off on another fieldwork trip to Uganda to collect 6-month treatment follow up data as part of a longitudinal study. This trip was a little different however, as we were joined by Alex Dower and Kamran Rafiq from Acting for Health, a London-based organisation who use drama for community engagement and public engagement(@ActingforHealth). As well as collecting data for our research, we also wanted to engage with the local community about schistosomiasis and to try a different approach, so Alex and Kamran worked with local groups to put together community workshops to generate discussion about schistosomiasis.

A range of community representatives from children and adults, to fisherman and farmers participated in the acting for health sessions over several days. A play, led by and starring community members, about schistosomiasis was then delivered to the whole village who convened at the local health clinic to watch. Radio announcements and word of mouth had helped spread the word about the play, and with it also being market day, a good crowd gathered to watch the performance. Local school children performed traditional African dances which were then followed by several sketches in which members of the community took on different community roles (e.g. fisherman, concerned parent, health worker) covering many different issues and topics surrounding schistosomiasis.

The ideas and storylines created were all relevant to the community which allowed spectators to relate well to the performance, understand the messages being portrayed and most importantly enjoy it. Involving the community ensured that the play was culturally appropriate and accessible, and that everyone was able to connect with the performance. Overall, the play became a great social occasion and appeared to be a success with both villagers, performers and researchers. 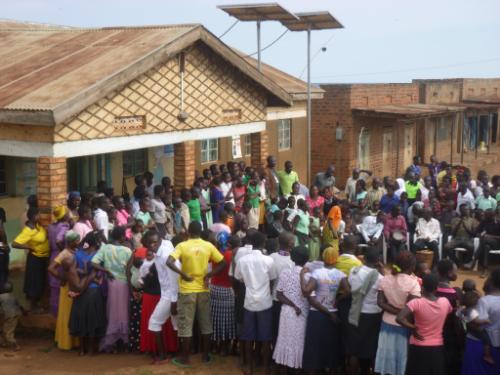 We hope that through engaging directly with the community, people living in this study site will now have some knowledge of why the Lamberton Lab is conducting research and will have some understanding of how schistosomiasis is transmitted. Even though control programmes are in place in Uganda, there has been limited success in some areas. Empowering communities to reduce disease transmission through engagement activities such as performance workshops and plays may help to improve the situation. Schistosomiasis transmission could be averted through simple behavioural changes such as avoiding contaminated water contact and preventing contamination of faeces into water bodies. A community performance can be a powerful tool for communicating these messages.

Overall, we found that this approach to engagement helped researchers build relationships with the local community. There is also the potential to adapt these types of activities to other neglected tropical diseases. Engaging with the community in this way also provided an opportunity to gain some feedback and learn about behaviours contributing to schistosomiasis transmission that we had not previously considered. Public engagement can thus benefit both researchers and communities.

Footage of the workshop and final play can be viewed on the Acting for Health website.