Know your enemy: the key to fighting parasitic diseases

At the Wellcome Centre for Molecular Parasitology (WCMP) in Glasgow, we are waging a war against some of the most harmful parasites in the world, including those that cause malaria, sleeping sickness, and the highly disfiguring leishmaniasis. In order to learn as much as we can about these organisms, we apply the “know your enemy” approach while attempting to design strategies to tackle them. I came across the lethal beauty of these organisms and their complex life cycles for the first time at the School of Pharmacy in Seville (Spain), and since then, I developed an interest for Public Health that led me to a PhD at the University of Glasgow. Currently I am a postdoctoral researcher at the laboratory of Professor Michael Barrett, at the WCMP and my research focuses on sleeping sickness - also known as human and animal African trypanosomiases. 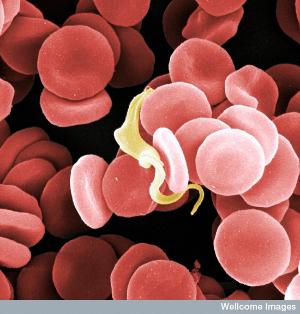 The single-celled organism that causes these diseases, Trypansoma brucei, lives and proliferates in the blood of people and cattle, until it eventually invades the most protected and crucial organ in the body: the brain. Their presence disrupts the nervous system, causing many symptoms, including sleep disorders that eventually lead to coma and death if left untreated. This characteristic clinical pattern is why the disease is commonly known as “sleeping sickness”. But not only will it send you to bed, it will switch off your brain. Trypanosomes are transmitted through the bite of the tsetse fly, which acts as a vector for the disease in the same way that the mosquito acts as a vector for malaria.

Sleeping sickness not only affects health but it also has a major impact on local economies. The areas of sub-Saharan Africa inhabited by the tsetse fly, depend greatly on their livestock and an outbreak of sleeping sickness can wipe out entire herds. However, at the present time, there is not a wholly effective treatment for the disease. To develop a drug that is safe to be prescribed for humans is an extremely expensive and time-consuming task. Currently, we estimate that it will take approximately 12 years of research and cost more than $1.2 billion to develop an effective therapy. Despite the fact that it threatens millions, sleeping sickness has been neglected for many years in terms of drug development, as the impoverished areas affected will not secure returns for such an investment.

In order to develop an effective medicine, we search for weak points within the biological systems of the parasite. These weak spots need to play vital roles in the parasite that can be interrupted with a chemical compound, and thus act as potential drug targets. In a simple comparison, drugs are our bullets. We can aim at one particular weak point with a rationally designed chemical that disrupts its function; or use more of a scattergun approach, trying a multitude of chemicals in the hope that one hits a target whose interruption has lethal results for the parasite.However, we need to pay particular attention to the health of the individual and avoid harming the infected host at the same time. After all, trypanosomes causing sleeping sickness are just cells like the ones building up your body. The only difference is that trypanosomes are single-cell organisms. 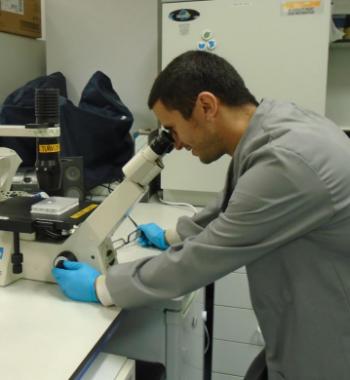 A potential group of drug targets include a series of molecules known as protein kinases. They are found in most existing forms of life and modify the shape and role of other proteins within complex chemical pathways. These modified proteins can influence the functions of a cell, so it ends up replicating, moving, feeding or adapting to the environment. Protein kinases play an important role in the cellular transmission of internal or external information. During my PhD research, I used cutting edge biotechnology to switch off every single gene affecting a particular parasite protein kinase. I identified 49 different molecules whose elimination resulted in the destruction of trypanosomes in the blood of infected mice, suggesting that their inhibition with chemical compounds may be a therapeutic strategy against sleeping sickness.

Some of these protein kinases essential for the parasite are very different from any molecule found in humans or other animals. They regulate parasite-specific functions not shared by the mammalian cell, so identification of drugs targeting them has the potential to kill the parasite without damaging the infected animal or person. Furthermore, some others are very similar to known mammalian protein kinases that misbehave in chronic conditions, such as many types of cancer. This may provide an opportunity to repurpose the usage of cancer-related drugs with good safety profiles to kill trypanosomes.

In a few words, my strategy to fighting parasites in the lab is to understand how they attack the body, and use these mechanisms against them in a counterattack. We have reasons to believe that the discoveries we have just published, may one day lead to the development of an effective medicine for sleeping sickness.