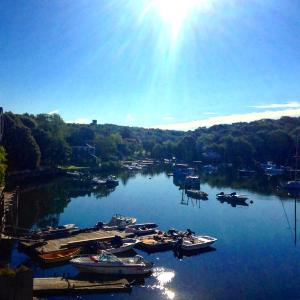 The 27th annual Molecular Parasitology Meeting (MPM) took place in September 2016 and gathered researchers from all around the world to the Marine Biological laboratory in Woods Hole at the Southwest corner of Cape Cod, Massachusetts.  The conference was organised and lead by Professor Kirk Deitsch from Cornell University, Professor Jayne Raper from NYU School of Medicine, and Professor Markus Meissner of the Wellcome Trust Centre for Molecular Parasitology (WTCMP), University of Glasgow.

The conference lasted five days with researchers sharing a range of novel findings in protozoan parasite biology.  The meeting had a particular focus on molecular and cell biology but also examined the development of biochemistry and genetic tools.  There was also a team of EuPathDB analysts present to gather feedback and input from attendees in order to improve the databases that the parasitology community frequently use.

This was my second time attending this conference, and I think it was another successful event. The content was of a very high standard and newcomers received a warm welcome from returning attendees.  The opportunity for graduate students (such as myself) and post-docs to showcase their work to more experienced researchers is a great development opportunity, and is much appreciated by those of us in the early stages of our career.  Approximately 300 researchers presented their work at this conference. In addition to short talks, there were poster sessions and lots of time for networking.

For me, some of the highlights included a number of interesting talks on invasion and egress of apicomplexan parasites, an area of research that I have a particular interest in.  There were also talks on organelles and drugs which included a great talk from Jana Ovciarikova of the Sheiner group (WTCMP) on ‘Novel mitochondrial behaviour in Toxoplasma gondii’. One of the presentations that stood out for me was one on Toxoplasma lipid scavenging presented by Sabrina Nolan (who also won one of the talk prizes).  She showed that Toxoplasma gondii scavenges proteins from the host and that this may be via coated pits at the parasites plasma membrane that take up molecules in an endocytic manner.  Another highlight was a talk by Joey Verdi that examined resistance to African Trypanosomes in baboons which may be related to the expression of Baboon Trypanosome Lytic Factor (TLF) in cattle.

The last day of the conference covered a variety of topics including protein scavenging, synthesis of cell wall membranes, and filamentous structures. We were also presented with the first ever Giardia genetic knockout by Jacqueline Edneter from the Schraner group (another prize winning talk). It was in this last session that I presented the findings of my PhD research on Toxoplasma actin filaments. The feedback from my talk was encouraging and well received with some interesting chats and questions following my presentation.

The conference ended on a high note for the WTCMP. Following up from his success at the Molecular Approached to Malaria 2016 conference, Dr. Sujaan Das from the Meissner lab beat off stiff competition to get one of the turbo-talk prizes. Sujaan’s work on actin in the deadly malaria parasite Plasmodium falciparum caught everyone’s attention at the 2016 MPM meeting.  An equally important achievement was the success of Dr. Nicolas Brancucci of the Marti Lab.  He won one of the distinguished talk prizes for his work on the role of lysophosphatidylcholine in the sexual commitment of Plasmodium falciparum.

Professor Robert Sinden (Emeritus Professor, Imperial College, London) gave an excellent keynote speech on ‘Malaria sexual development: A challenging journey from the shadows into the spotlight’.He took us on a journey through his incredible life as a researcher. Apart from his significant contributions to the malaria community, his words of support and encouragement when speaking to us as the future generation of researchers was very inspiring.

In addition to the excellent presentations, MPM 2016 provided numerous opportunities to meet and network with existing friends and to establish new networks of friends and collaborators. On reflection, I am rather sad that this was the last molecular parasitology meeting that I will attend. My next role will be in cancer research at the Beatson Institute in Glasgow. Attending these meetings, and the people I have met as a result, has been one of the highlights of my PhD.

By Jamie Whitelaw (formerly a PhD student in the Meissner Lab)