Using Comics to illustrate Our Research

Using Comics to communicate about science

2010 was the 75th anniversary of the Wellcome Trust and each of their UK-based research centres was given some funding to mark this occasion. At the WCMP former PhD student Jamie Hall approached comic artist Edward Ross to see if he would help to create a comic about parasitic disease that could be used to communicate about the research carried out at the Centre. A few months later, Jamie and Edward, together with artist Rachel Morris, created the Centre’s first comic ‘Parasites’. Edward created the pictures, Rachel designed the cover, while Jamie provided the scientific content and insight into the research. Graphic Medicine (a website promoting medical and science art and illustration) described the comic as “a clever way of engaging the public and raising awareness of the devastating effects of parasitic diseases on the people of developing nations.”

The ‘Parasites’ comic was followed up in 2012 with ‘Malaria: the battle against a microscopic killer’.  This comic was largely created by Edward and Jamie with input from two other comic artists, Tom Humberstone and Luke Pearson. The malaria comic details the long history and impact of malaria on humans, and explains the complex life-cycle of the plasmodium parasite in simple and accessible language.  Again, the research carried out at the WCMP is illustrated through Eddie’s colourful illustrations.

Both of these comics have been a vital component of the WCMP public engagement activities.  They are distributed at school-based events, science festivals and events at local science centres and museums. The comic images have also been used for other communication materials such as postcards, badges, T-shirts and to illustrate the WTCMP website.  Indeed, the comics have been used to ‘brand’ most of our communication and engagement activities. Our comics have also been translated into a number of different languages including Swahili, and they have been distributed at public engagement events in countries such as Malawi, where parasitic diseases have a major impact on public health. 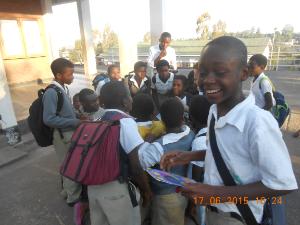 Comics are accessible and appealing to a range of audiences, from young children to adults. Their visual impact draws in the reader, and complex scientific concepts can be simplified and illustrated in a straightforward manner.  The use of narratives and storytelling is also a powerful component of comics, and research has shown that using storytelling can be an effective way to engage an audience with science.  The comics have central characters (some based on actual WCMP researchers), and this helps to place the issue of parasitic disease (which isn’t really a major health consideration for the UK population) into a human context.  The comics enable the reader to visualise the serious consequences of these diseases on people, and understand why we carry out our research. Our comics link what we do every day in our labs, to the experiences of those living in regions where parasitic diseases are endemic.  This is what makes them so powerful.

We are in the process of developing new comics with Edward and Jamie.  Our newest one is on sleeping sickness and features the research of one of our principal investigators, Dr Annette MacLeod.  The other comics in the pipeline will explore toxoplasmosis and how the immune system interacts with parasites. Both of which are the focus of several lines of investigation by WCMP researchers.

Developing a comic takes several months, starting with the development of a narrative around a specific aspect of our research here. We try to incorporate real researchers where possible, and put their research into context by introducing realistic settings and situations.  It is an iterative process and several drafts are produced until the final inked version is completed (see pictures below). The challenge is to produce a comic that tells an engaging story while presenting (at times) complex science to non-specialists.

All of our comics can be viewed here, and we welcome any feedback.  We showcased our comics at the Glasgow Comic Con on July 2, and our public engagement manager, Dr Vickie Curtis, gave a lunchtime talk on May 25th at the Hunterian Art Gallery at the University of Glasgow outlining how we use comics to talk about our research.  This was part of the Comic Invention exhibition.