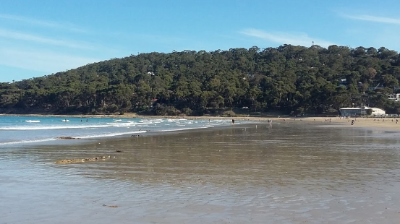 Once every four years, since its inception in 2000, malaria researchers from around the globe have descended on the seaside town of Lorne, two hours south of Melbourne, for Australia’s largest international conference on any single tropical disease - Molecular Approaches to Malaria (MAM). This year was no exception.

Organised by a committee of esteemed scientists from a host of Australian universities and research institutes, and with an international steering committee that included the director of the Wellcome Trust Centre for Molecular Parasitology (WTCMP), Professor Andy Waters, MAM 2016 was the fifth conference of its kind and a staple in the calendar of any malaria researcher. MAM 2016 brought together some of the world’s leading experts in malaria research, and provided a venue for both young and seasoned researchers, from endemic and non-endemic countries, to showcase their latest findings and the advances in molecular technologies used to study this deadly parasitic disease.  In recent years, the conference has had to expand to accommodate sessions in new areas of research as our scientific capabilities have expanded in the post-genome era.

This year, MAM 2016 covered a series of sessions that followed the various stages of the Plasmodium parasite’s lifecycle, its evolutionary origin, generics, and approaches to vaccine and drug development.  A number of potential antimalarial compounds were presented, and researchers such as Professor Simon Draper of the Jenner Institute at the University of Oxford presented his latest findings from clinical trials of malaria vaccine candidates. Clinical research and policies relating to global malaria control were also covered by researchers from areas where malaria is endemic.

Though it is impossible to provide a complete summary of MAM 2016’s impressive selection of talks, workshops and poster sessions, there were some interesting highlights and trends that appeared throughout the five days of continual focus on malaria research. In the four years since MAM 2012, the repertoire of molecular tools available for the study of malaria parasites has increased dramatically and this was evident from both talks and poster sessions.  Our knowledge of the genome sequences of human Plasmodium parasites has now been expanded to include those of P. malariae and P. ovale.

Malaria research has also been affected in recent years by changes in policies governing the use of non-human primates for scientific research in the United States. Though the use of chimpanzees is largely banned on a global scale, the U.S. National Institutes of Health (NIH) effectively ended its support for research on chimpanzees from November 2013. As of June 2015, the U.S. Fish and Wildlife Service has listed all chimpanzees, captive and wild, as endangered. Trends in malaria research have reflected these changes. At MAM 2016, a number of researchers presented advances in the use of the humanised-liver chimeric mouse model, termed the FRG huHep mouse, for examining human malaria parasites at stages in which they infect the liver.

MAM 2016 provided a comfortable venue for informal discussion between senior scientific investigators, post-doctoral scientists, and PhD students.  This enabled a steady flow of ideas regarding such issues as handling “big data” from large-scale experiments, publishing, and career advancement in academic science. The conference dinner also featured a change in research topic from malaria to a lecture by charismatic toxicologist, Professor. Jamie Seymour of Australia’s James Cook University. In a presentation entitled “Why didn’t I die from a venomous animal at this conference?”, Professor. Seymour encouraged attendees to transfer from the study of malaria to something “much more interesting”; namely, the study of venomous creatures ranging from cone snails and the duck-billed platypus, to the infamous box jellyfish.

At the conclusion of the conference, delegates were encouraged to look ahead to MAM 2020 and the exciting possibility of additional breakthroughs in malaria research that may occur in the interim. On a happy note, out of scores of oral presentations and almost 350 poster presentations, Dr. Sujaan Das, currently of the Meissner group at the WTCMP, was awarded one of the much coveted MAM 2016 Poster Prizes for a presentation of his PhD work on the role of a merozoite surface protein in P. falciparum egress from infected host red blood cells.  This work was carried out in the lab of Professor Michael Blackman of the Francis Crick Institute in London. Overall, this year’s MAM conference maintained its reputation as an important feature in the malaria research calendar, and we can remain hopeful that Glasgow’s WTCMP will again be well represented at MAM 2020.

Article and photos provided by B. Joanne Power. Funding for conference attendance awarded to B. Joanne Power as part of the Wellcome Trust 4-Yr PhD Programme at the University of Glasgow.