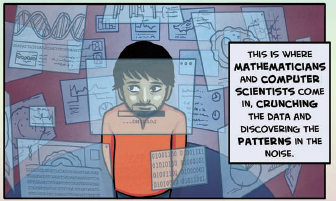 Bioinformatics is an interdisciplinary field that combines computer science, statistics, mathematics and engineering to understand large volumes of biological data. Our team at  the WCIP works collaboratively with groups to provide research support in this area.  We are a diverse team and aim to apply our broad range of expertise and interests to maximise the throughput and impact of research at the WCIP.

In addition to data analysis, we can prepare DNA and RNA libraries for sequencing with Illumina and we can provide support to users of EuPathDB-familiy databases (tritrypdb.org, plasmodb.org, toxodb.org)

The bioinformatics team are based in B6-28 in the Sir Graeme Davies Building, University Place, and are always happy to discuss any ideas that you might have relating to your own research.

Kathryn completed a PhD studying host-pathogen interactions in a viral pathogen of poultry at the Institute for Animal Health in 2005, and then spent some time in industry exploring biotherapeutic applications of single-domain antibodies from elasmobranchs.  In 2013, she undertook an MSc in bioinformatics at the University of Edinburgh, after which she joined the WCIP bioinformatics team.  Kathryn oversees the core bioinformatics facility and has collaborated on a diverse range of projects across WCIP and beyond.  She has a strong interest in software development and is embedded into EuPathDB, integrating data generated within WCIP into TriTrypDB (tritrypdb.org) and other EuPathDB sites and developing analysis methods for new data types.  She is also involved in the 4273π project taking bioinformatics into schools across Scotland.  Please drop into B6-28 with any questions about the bioinformatics service. You can also email or follow me on Twitter.
‌‌

Jon spent the first portion of his career as a biochemist, studying membrane transport mechanisms - latterly as they related to the drug sensitivity/tolerance of Trypanosomes. He subsequently retrained in Information Technology, undertaking an M.Sc. here at Glasgow. Jon decided to apply these skills to bioinformatics, and has specialised in the following:

Before joining the WCIP in 2019, Dario was a software engineer at the Institute of Cancer Sciences (University of Glasgow) and bioinformatician at the University of Cambridge. In 2006, he obtained a PhD degree in quantitative genetics from the University of Edinburgh. Dario’s expertise revolves around the application of statistics and programming to the analysis of large biological datasets, mostly, these days, from high-throughput sequencing experiments. Broadly, his areas of interest are: genomics, epigenomics, transcriptomics; software development; and statistics.

Dario strongly supports the sharing of knowledge via collaborations across different fields and by making analyses reproducible and publicly available via Github.

Ross' career started in the lab focusing on the molecular and cell biology of kinetoplastids. In the lab he developed CRISPR based tools for kinetoplastid species and worked on the TrypTag (tryptag.org) project, localising a large portion of the Trypanosoma brucei genome. He currently works as part of the EuPathDB team, focusing on TriTrypDB. Ross' skills include:

My name’s Craig Lapsley and I run the WCIP’s Next Generation Sequencing library preparation service based on Level 6 of the Sir Graeme Davis Building in bay L6/60. If you want libraries prepared, or simply have questions about the library preparation process, pop on up and say hello. My door’s always open!