Rabies virus is one of the earliest known and most notorious zoonotic pathogens. Untreated, it has a case fatality ratio approaching 100% and despite the availability of vaccines since the time of Pasteur, it still kills 60-70,000 people – and many thousands of livestock – every year. Paradoxically, although it can infect and kill any mammalian species, in nature, rabies virus persists in host species-specific epidemiological cycles, mostly in bats and carnivores. Each of these cycles has arisen from an historical jump between species.

Research at the CVR focuses on understanding both the fundamental ecological and evolutionary drivers of viral jumps between species and developing evidence base strategies for the management of rabies at the interface of wildlife, humans and domestic animals. To do this, we use a combination of molecular evolutionary techniques, field studies and mathematical modeling. 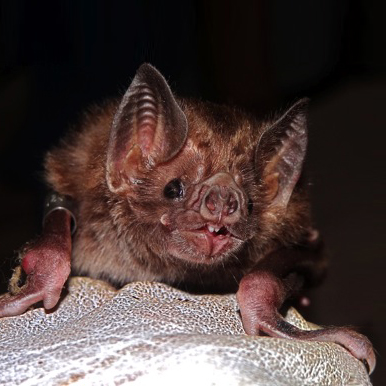 The common vampire bat (Desmodus rotundus) is the primary source of human and livestock rabies in the Americas. Credit: Daniel Streicker