Chikungunya virus (CHIKV) is a single stranded positive sense RNA virus belonging to the genus Alphavirus of the family Togaviridae. It has become an increasingly important arbovirus in tropical and subtropical regions, resulting in febrile and arthralgic disease in humans. After the large outbreak in the Indian Ocean in 2004 CHIKV infections have spread throughout the Indian Ocean and Africa into Southern Europe, and since 2014 into the Americas. CHIKV is spread by aedine mosquitoes, with Aedes aegypti being the most important vector, and more recently Aedes albopictus following a change in the envelope protein.

Research at the CVR focuses on the interaction between the virus and it mosquito-vector, specifically the innate immune response and how this influences vector competence and transmission. 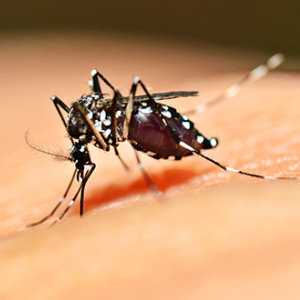