Our group here at Glasgow is interested in the relationship between translating ribosome and nascent polypeptide.  Currently this leads us into two main avenues of research.

Inner membrane proteins make up 20-30% of the bacterial proteome.  The major route of insertion for such proteins is via the Sec machinery.  However certain membrane proteins are Sec independent and instead insert via an essential membrane protein called YidC.  Despite the importance of YidC, the precise function and mechanism of this protein are difficult to define.  In our lab we are using Fluorescence Resonance Energy Transfer (FRET) to monitor structural changes of an inner membrane protein during synthesis on the ribosome, targeting to the YidC pathway and integration into the membrane.  This technique enables us to monitor the compaction of α-helices and the formation of tertiary structure, in order to elucidate the timing of folding events that occue between the ribosome exit tunnel and the adoption of the final functional conformation in the membrane.  The findings are supported by in vitro insertion assays and crosslinking to the signal recognition (SRP), which provide further details of the role of SRP in YidC targeting. 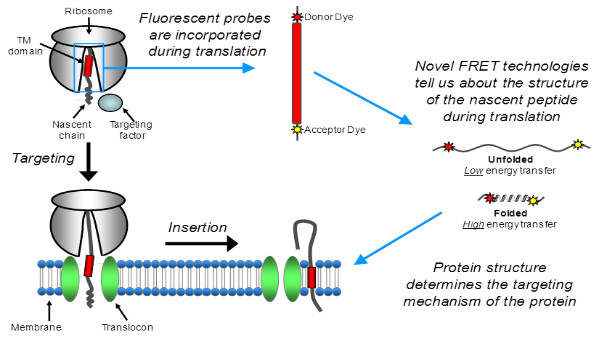 Work in our laboratory is sponsored by: