Biodiversity Net Gain and Offsets Markets in the UK

At the start of 2018, the UK Government outlined its ambitious 25 Year Environment Plan. The very first action is to embed an ‘environmental net gain’ principle for all future developments, including housing. Reconciling the need to build 300,000 new homes in the UK by the mid-2020s with a goal of creating or restoring 500,000 hectares of wetland, woodland, grassland and coastal habitat requires a new approach. The use of “habitat banking” as part of a market for biodiversity offsets is one such innovative policy tool.

Our work within the Environmental and One Health Group at Glasgow has focussed on providing an environmental economist’s perspective on how we design markets for biodiversity offsets using key lessons from over 50 years of research into pollution permit markets. Our work concentrates on the core question: how can we design successful biodiversity offset markets? By “successful” we mean a market that encourages landowners to invest in biodiversity conservation efforts to meet an ecological goal at a lower cost than alternative policies. We recognise that biodiversity offsetting is controversial. Can it truly deliver No Net Loss of Biodiversity, or a Net Gain in a cost-effective way? We see the most benefit for biodiversity offset markets being in situations where strong biodiversity protection measures do not yet exist and where finding a means to reduce perceived “biodiversity versus development” conflicts will be key to convincing reluctant regulators to implement stricter protection measures.

Such an offset market is simple in theory: firms wishing to develop land would need to hold offset credits, which demonstrate the creation of additional conservation gains to compensate for damages caused by development. These credits would be provided by landowners who invest in restoration or protection actions, which earn them a financial return from the sale of credits. Trading in credits creates opportunities for low-cost, effective conservation actions to be funded, lowering development/conservation trade-offs.

Using integrated ecological-economic modelling we have considered several questions related to the design of biodiversity offset markets. The most crucial aspect of the market is what to trade; for emissions trading, this was simple, for example, one tonne of carbon dioxide. For biodiversity, this is much more difficult. We argue that offset markets should only be used where there is a regulatory goal for a specified element of biodiversity, for example, a certain species or habitat. This has significant implications on the other key aspects of market design; the trading ratio which sets the rate of exchange between offsets at different points in space and time; the geographic size of the market; and how the market is regulated. 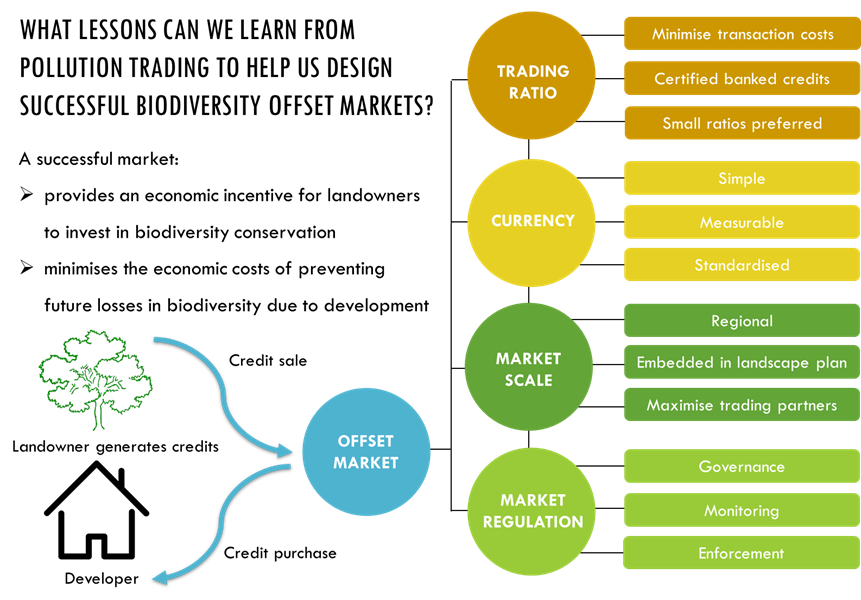 A summary of our current research papers is provided below. Please contact either Nick Hanley or Katherine Simpson if you are interested in discussing this work further.

We provide a new perspective on biodiversity offset markets by focussing on what can be learnt from one of the best-researched environmental markets: the market for tradable pollution permits. We argue there are four key design parameters in terms of how and what to trade. These design parameters likely determine the ecological effectiveness and economic efficiency of any market in biodiversity offsets.

Most programmes that incentivise the supply of public goods such as biodiversity conservation on private land in Europe are financed through the public purse. However, new ideas for how to fund biodiversity conservation are urgently needed, given recent reviews of the poor state of global biodiversity. In this paper, we investigate the use of private funding for biodiversity conservation through an offset market. The environmental objective is to increase some measure of biodiversity in a region (‘net gain’) despite the loss of land for new housing. Farmers create biodiversity credits by changing their land management and then sell these credits to housing developers who are required to more than offset the impacts of new housing development on a specific indicator of biodiversity. Combining an economic model of market operation with an ecological model linking land management to bird populations, we examine the operation, costs, and biodiversity impacts of such a (hypothetical) market as the target level of net gain is increased. A general result is established for the impacts on price and quantity in the offset market as the net gain target is made more ambitious. For a case-study site in Scotland, we find that as the net gain target is increased, the number of offsets traded in equilibrium falls, as does the market-clearing offset price. Changes in the spatial pattern of gains and losses in our biodiversity index also occur as the net gain target is raised.

Biodiversity offset markets can incentivize private landowners to take actions that benefit biodiversity. A spatially explicit integrated ecological-economic model is developed and employed for a UK region where offset buyers (house developers) and sellers (farmers) interact through trading offset credits. We simulate how changes in the ecological metric and geographic scale affects the performance of the offset market. Results show that the choice of the metric has a significant effect on market liquidity and the spatial distribution of gains and losses in the “target” species. The results also consistently reveal relatively higher potential welfare gains for developers than for farmers.

This paper has been prepared as part of EFFECT UK Case Study #5 Biodiversity Offsetting to explore farmers, land managers and environmental advisors’ perspectives on various aspects of the Environment Bill and associated 25 Year Environment Plan. We undertook an online survey to assess:

The full report is available to download here (PDF): EFFECT Survey Write Up

This work has been funded by: