Chitral lies in the isolated region of the Hindu Kush, at an altitude of 1500m upwards in the North West Frontier Province of Pakistan, on the border with Afghanistan. The four great mountain chains in Asia are formed from the Hindu Kush, Pamir, Karakoram, and the Himalyas. The highest peak of the Hindu Kush is Tirich Mir 7,787m. Mountain glaciers play a significant role in shaping these valleys, together with weathering, erosion and tectonic uplift, and also the effect of earthquakes, landslides and flash floods. Glaciers can be creative - as a source of irrigation or destructive - leading to loss of agricultural land, roads, and houses. A number of mountain passes surround the Chitral valley. There have been political and social links between the upper valleys and communities surrounding them across these high mountain passes. Historically the Chitral valley was one of the main arteries of the Silk Road across the Barogil pass to Yarkand and Kashgar in China. The Lowari Pass (3,118m) is the southern and the Shandur Pass (3,734m) the northern gateway to Chitral by road. The road journey from Peshawar takes about 12 hours. These land routes are inaccessible during winter and road access is through Afghanistan. Pakistan International Airline flights to Chitral take about one hour from Peshawar and Islamabad  and are weather dependent. 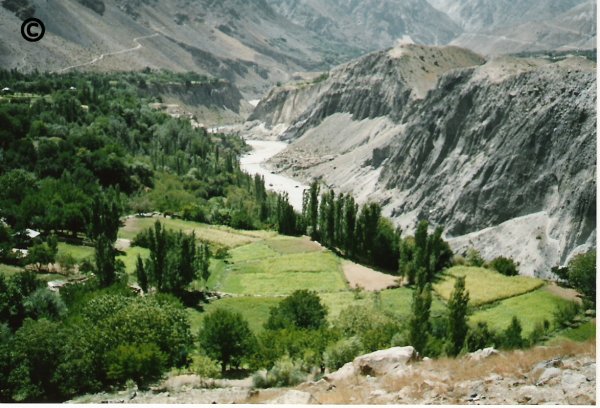 The river systems of Chitral cover a total area of about 300km and all the vegetation and human settlements in Chitral depend directly or indirectly on them. The Yarkhun river in the north east joins the Laspur river further south near Mastuj to form the Mastuj river. The latter flows south to join the Lutkho river from the west. The Lutkho river is fed by the Tirich Mir glacier. The Mastuj and Lutkho rivers combine to form the Chitral river which flows through Chitral Town. At this stage the plain of the Chitral river is 4km wide with cultivated alluvial fans. As the Chitral river flows further south it becomes the Kunar river and is joined by the Ayun river from the west, which in turn is fed by the narrow rivers of Rumbur, Bumburet and Birir valleys. The Ayun valley is famous for its fertile land and lush vegetation. The Kunar river winds its way west into Afghanistan where it joins the Kabul river and eventually re-enters Pakistan and joins the Indus river at the historic city of Attock.

The multidisciplinary International Hindu Kush Expedition to Chitral took place during mid July to mid September 1999. This expedition was largely funded by the Ralph Brown Expedition Award of the Royal Geographical Society of London, the Linnean Society of London, and the Universities of Glasgow and Peshawar.

There were a total of forty participants from twelve teaching and research institutions in the UK, Pakistan, and USA. The main objectives of the expedition were to study the impacts of mountain rivers on rural communities and the environment in Chitral, Hindu Kush. The expedition concentrated on the narrow river valleys (100 - 800m wide) of Garam Chashma, Bumburet, and Rumbur and the broad river valleys (1-4km wide) of Chitral and Mastuj. The expedition was divided into four main groups.

During the expedition access to sites was by four wheel drive jeeps driven by expert local drivers. Accommodation for participants was arranged at the Chitral Area Development Project complex in Denin across the river from Chitral Town. In addition to the scientific methodologies used during the expedition a series of interviews with local village communities were carried out by members of the expedition from the four groups. Informal talks were given to local school children about the expedition, and intra-expedition talks were regularly held for the expedition party.
The intended outputs of the expedition were as follows.
(i) Interaction between expedition members, including training of Pakistani members in state-of-the-art methodologies used by overseas members during field work
(ii) Overseas members learning of the problems of working in isolated and hazardous environments.
(iii) International academic and multi-disciplinary collaboration leading to future longer term research and teaching projects.
(iv) Encouragement of local communities in terms of community participation and capacity building, understanding and managing their natural resources and the unique nature and global significance of Chitral.
(v) Increasing the awareness of local communities to the mechanisms of natural hazards, their consequences and avoidance.
(vi) International Symposium

An international symposium on the expedition findings and associated topics had been planned for September 2001, in Chitral. This had to be cancelled at a few days notice because it had been scheduled to begin on 18th September 2001 in Chitral, just after the 11th September 2001 destruction of the Twin Towers in New York.

Results of the Expedition

At that meeting, preliminary results of the expedition were reported. The meeting also acted as a forum for planning future initiatives in the area.

The results of the expedition have now been disseminated in a number of papers published in national and international peer reviewed journals. 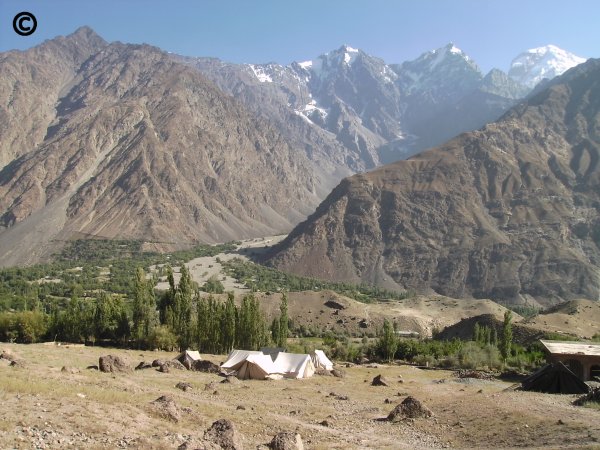