The charity is governed by a Trust Deed dated 2nd June 1997, and is constituted as an association.
Trustees are appointed by resolution of the Trustees passed at a Trustees’ Meeting.

The objectives of the charity are to support rural communities in the Hindu Kush, especially the Kalasha, and are centred  on improving community education, health, and living conditions. They also include responding to natural and man-made catastrophes, and ensuring the environmental sustainability of the region - especially the forests and associated fauna and flora. All of the activities of the charity are focussed on these objectives under the direction of the trustees and by the work of the Field Director and her local staff in the field.

The trustees’ expertise covers a wide range of experience including law, business, journalism, the environment, and education in the HE sector. It also includes considerable experience of working in developing countries – especially Pakistan. This experience and expertise extends over periods in excess of 25 years for each of the trustees, and provides an excellent basis for the conduct and regulation of the charity.

Maureen Lines Tamga-i-Imtiaz (SOAS - Maureen Lines)
Maureen Lines has dual British and Pakistani nationality and has more than 25 years experience of working in Pakistan. She lives in Peshawar, Khyber Pakhtunkhwa Province (previously North West Frontier Province), and works there and in the Kalash valleys, Chitral. She has a small local staff including an office manager, driver, cook, and security personnel.

Good governance and appropriate operational systems are vital for the effective operation that is at the centre of any successful charity either large or small. The Trustees place these at the centre of the Hindu Kush Conservation Association as witnessed by items 7 to 17. Governance and operational systems are regularly reviewed by the Trustees by email and when necessary by telephone with the Field Director, between the UK and Pakistan.

The trustees individually and collectively have responsibility for the good governance of the charity, submission of the annual report and financial statement to the English and Welsh Charity Commissioners, preparation of the newsletter that is circulated to supporters several times a year, and for financial regulation of the charity. The trustees oversee the work programme and activities of the Field Director, providing regular advice and guidance including on security issues as necessary. These responsibilities are regularly reviewed and assessed in relation to the month-by-month activities of the charity in the field.

The year 2012-2013 has been less prone to natural disasters than 2011-2012 year. However the environment of the Hindu Kush and particularly that of the Kalash Valleys in Chitral is always challenging. Earthquakes and flash floods are common events, and the trustees are aware of the need for quick action when required. In Chitral and especially the Kalash Valleys, flash floods destroy homes, erode valuable agricultural land, and destroy roads and bridges. The trustees are very much aware of these issues, and several of them have direct experience of the area and the Kalasha, while the Field Director has a unique long term record in the area.
During the 2012-2013 year the charity has continued to financially support the transport and medical treatment of ill and injured members of the Kalasha from the Kalash Valleys either to Chitral Town or to Peshawar. This is organised and supervised by the Field Director as an ongoing and important part of the work funded by the Hindu Kush Conservation Association.

In the current year, the construction of a school for the Kalasha children in Birir valley has been a prime objective of the trustees. The Field Director has played a central role in overseeing the planning and construction of this much needed facility. The majority of the building is now completed although additional building work is needed. There is also an urgent need for basic facilities including chairs and tables, books and other teaching materials. The trustees are delighted with the progress of the school building, and sincerely thank the many donors who have made this progress possible.

The background to the school initiative is as follows. The Field Director in consultation with the Trustees had for some while been planning the construction of a co-educational school in Birir valley - one of the Kalash valleys. This had been and continues to be a long-standing request by local community leaders. The trustees were highly supportive of this venture, and were able to raise significant ring-fenced funds for the construction of the school from supporters of the charity in the UK. 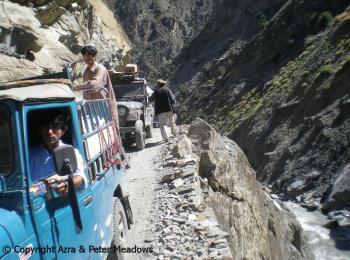 10. Field activities and reporting procedures
There is weekly and often daily email contact between the Field Director, and the President and Chairman of the trustees. This concerns short term or emergency items – as in the recent 2010 and 2011 floods, and longer term activities and planned developments such as the building and staffing of the new school.

All the funds received by the Hindu Kush Conservation Association come from charitable donations by supporters of the charity. Fund transfer from the UK to Pakistan is undertaken on a monthly basis to a nominated bank account in Pakistan, with email dialogue being regularly maintained between the Field Director, and the President and Chairman on these issues. Financial reporting is undertaken on a monthly basis. The Field Director forwards itemised spreadsheets of monthly expenditure to the President and Chairman.

12. Collaborative work with other charities

Working with other charities has great potential and actual benefits to a small charity such as the Hindu Kush Conservation Association. For example during the 2010 – 2011 floods, the Field Director worked in the Kalash valleys with local people operating very successfully with the UN World Food Programme. The trustees are very much aware of the benefits of arrangements such as this, and are continuing to provide every encouragement to the Field Director to widen her collaborative ventures with relevant NGOs, governmental and international organisations.  There is huge potential for this sort of collaborative action. Experience elsewhere strongly indicates that collaborative ventures of this sort will have immediate and sustainable benefit for the Kalash communities and their environment, as well as for the wider area of Chitral and the Hindu Kush. 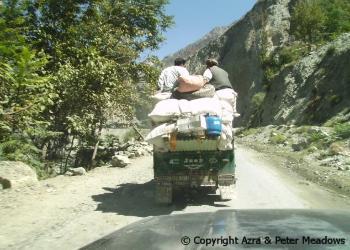 13. Risk Management
Risk management is of vital importance in a geographical area such as Khyber Pakhtunkhwa. It includes management of risk associated with natural disasters of various sorts – earthquakes landslides, flash floods - and risk associated with local insurrections. Both of these risk elements occur periodically and can cause problems. During the current year 2012-2013, risk management in Khyber Pakhtunkhwa and especially in Peshawar and the Kalash Valleys has become more important due to increased insurgent activity.

The Field Director and some of the Trustees have long term on-the-ground experience of these issues. The risk levels are regularly monitored and acted on by the Field Director, where necessary with advice from the trustees.  Security guards are needed at night in property in Peshawar and often in the Kalash Valleys, and security during travel by road between Peshawar and Chitral is assessed before and during each trip. Flights between Peshawar and Chitral are also sometimes used because they are sometimes safer than travel by road.

The trustees have always been aware of the need for child protection and care. This is central for any charity, particularly for one that supports work in a developing country. During the 2011-2012 year the trustees put this into a more formal context by consulting in detail the current legislation in the United Kingdom and Pakistan. Both countries have robust legislation in this area. This has helped the trustees to provide a Child Protection Policy statement regarding their and the Hindu Kush Conservation Association’s view of the great importance of this issue. The Hindu Kush Conservation Association’s Child Protection Policy statement is given in the appendix. The trustees are pleased to report that no specific issues have been raised with them during the current 2012-2013 year.

During the year 2012-2013, two of the trustees – Peter Meadows SQA (chairman) and Azra Meadows OBE - have again visited Pakistan. This visit is on a project funded by the ‘Scottish Government International Development Fund’ (SGIDF) through the University of Glasgow to work on an SGIDF supported rural community uplift programme. The SGIDF programme is broadly complementary to the Hindu Kush Conservation Association’s programmes on rural community development. SGIDF provides international and local travel and subsistence on their project. Hence no funds of the Hindu Kush Conservation Association are involved. The visits perform the very important function of allowing up-to-date assessments of general security risks to be made. They also provide an opportunity to meet the Field Director of HKCA to discuss risk assessment, current and potential future activities and current and future cost implications for the charity.

The charity has no potential or actual links with terrorist activity. The Trustees and the Field Director are very much aware of the issues and potential dangers in this context (see http://www.charity-commission.gov.uk/).

As in previous years, the trustees have continued to have due regard to the guidance on public benefit published by the Charity Commission, and confirm that they have complied with it. They also follow the generic advice given by “Good Governance. A Code for the Voluntary and Community Sector” (second edition October 2010. ISBN 978-0-7199-1801-8). The Good Governance Code identifies six guiding principles and the trustees of the Hindu Kush Conservation Association are guided by these in their activities and advice.

The six principles of the Good Governance Code involve the board of trustees providing good governance and leadership by (a) understanding their role, (b) ensuring delivery of organisational purpose, (c) acting effectively both as individuals and as a team, (d) exercising effective control, (e) behaving with integrity, and (f) being open and accountable.

Peter Meadows
Chairman, Board of Trustees.
On behalf of the Trustees of the Hindu Kush Conservation Association.
UK Charity Number: 1063232.
15th March 2013

The Hindu Kush Conservation Association currently part-funds the following activities.
1. The supply of over-the-counter medicines to several dispensaries in the Kalash Valleys.
2. The transport and care of injured or ill Kalasha to and from Chitral Town and Peshawar for medical treatment.
3. The construction of a new school in the Birir Kalash Valley.

Children and other vulnerable members of the Kalash communities are sometimes involved in these activities. The trustees of the Hindu Kush Conservation Association are aware of the activities involved in the above items in terms of child protection, and of the relevant international, United Kingdom and Pakistan laws regarding child protection, and will take appropriate action if and when necessary.