Saltmarsh vegetation and coastal protection:
An experimental flume study of the cord grass spartina spp. In the Clyde estuary

Salt marshes occur on British coasts between mean high water spring tidal level and mean high water neap tidal level. They are found in sheltered regions such as estuaries and sea lochs, and consist of a slightly raised upper intertidal mud habitats colonised by salt-tolerant plants. There are a number of sites in the Firth of Clyde where salt marshes are well established, one being at Ardmore Bay, and another further up the river near the Erskine Golf Club. The Cord Grass Spartina anglica is a major feature of the seaward fringe of this latter saltmarsh, and is the subject of the present investigation. We have studied the effects of this species on water flow in an Armfield Tilting laboratory flume, in an attempt to assess the species' importance in protecting this particular salt marsh, and hence by extension other salt marshes, from erosion. The flume has a working length of 12m and a width of 0.305m.

Stands of the plant when studied in the flume, have a dramatic effect on the flow of water. Our results show that the stands produce a high degree of turbulence in the water as it moves through the stand, with an associated reduction in water velocity. At the same time, water flowing either side of the stand in the flume has a significantly increased water velocity. These experiments show that Spartina anglica is likely to have major effects under field conditions in increasing turbulence and slowing water movement through the seaward fringe of salt marshes where it occurs. At the same time it may cause increased velocities outside the margins of the salt marsh, which in turn would potentially lead to erosion. A combined field, laboratory and modelling approach is therefore suggested for the future. 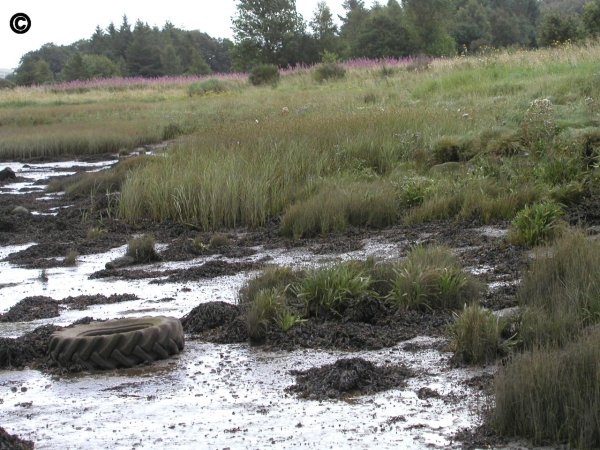 The estuarine fringe of the saltmarsh at the Erskine Golf Club site. Dumbarton Rock and Castle can be seen in the distance. The large stands of Spartina in the centre left of the picture are very obvious. 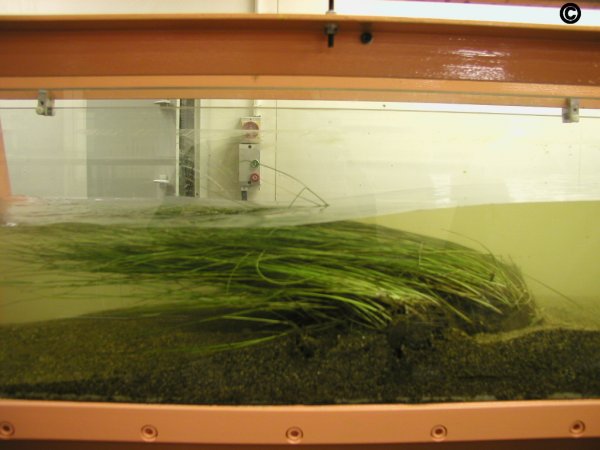 Spartina bending towards the left at high water velocities in the flume. 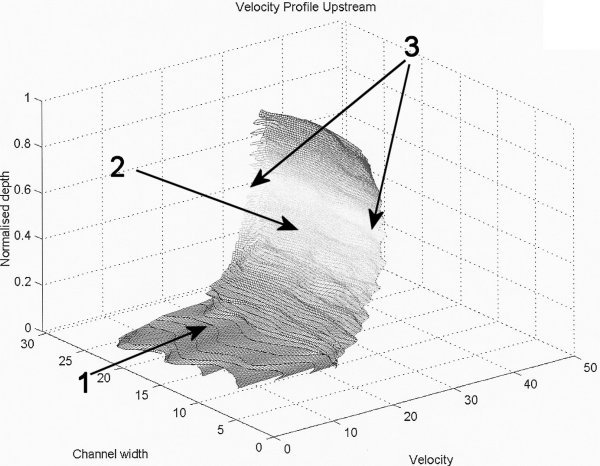 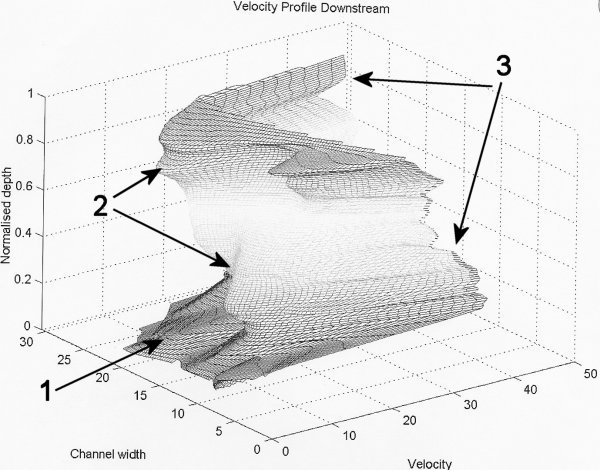 Velocity profile downstream of Spartina in the flume.  3-D plot. Current velocity is slow in the centre of the flume through the Spartina (1 and 2), and fast at the edges of the flume on either side of the Spartina (3). Note confused profile of velocities indicating a high degree of turbulence.
© Diagram Authors Copyright