Bioturbation, geochemistry and geotechnics of sediments affected by the oxygen minimum zone on the Oman continental slope and abyssal plain, Arabian Sea

Oxygen minimum zones are features of a number of nearshore oceanic waters where high organic inputs occur, and they are known to have marked effects on the biology of pelagic and benthic organisms associated with them. The mid-water oxygen minimum zone in the Arabian Sea is a typical example. It extends from the coast of Oman eastwards towards the Indian subcontinent covering many thousands of square kilometres. The zone impacts on the Omani continental shelf and slope between about 100 metres and 1000 metres water depth, and has highly significant effects on the sediments and infauna in the area.

In this paper we investigate the way in which the presence of the oxygen minimum zone alters the interactions between bioturbation and sediment geochemical and geotechnical parameters. We have done this by comparing sediments within and below the oxygen minimum zone on the Oman continental slope and adjacent abyssal plain during the post monsoonal autumn season. We took quantitative measurements of Eh and pH, of shear strength and water content, of organic carbon and carbonate, and of bioturbation structures in vertical profiles down  subcores taken from spade-box core samples.

The oxygen minimum zone stations had distinctively low redox conditions, different geotechnical properties and different bioturbation structures than stations below the oxygen minimum zone on the abyssal plain. These differences were related to the degree of anoxia and to water depth.  We also noted the presence of subsurface sediment heterogeneity on the continental slope within the oxygen minimum zone suggesting past instabilities of the slope and  episodic downslope movement. Within the OMZ,  Eh, water content and bioturbation decreased with increasing sediment depth. There was a slight decrease in pH in the top 5 cm at all stations. Shear strength always increased with increasing sediment depth. 44% of down core correlations between parameters were significant, mostly in the OMZ.  29% of the correlations across water depths were significant. Within the OMZ, Eh, pH and carbonate  were positively correlated with increasing water depth, and TOM and sediment water content were negatively correlated with increasing water depth. An Eh-pH diagram identified three water depth groups : 391 to 688 metres, 840 to 992 metres. and 1008 to 3396 metres. Cluster analyses showed firstly that the upper and lower sediment depths formed separate clusters, the break occurring at 4 to 7.5 cm, and secondly that there were distinct clusters from the shallowest to the deepest water depths. 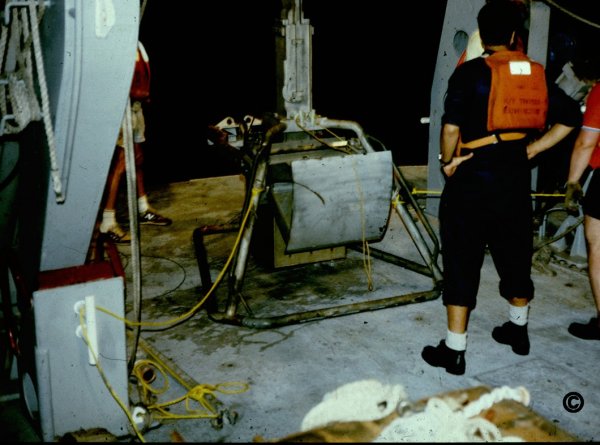 © Photograph Copyright Azra and Peter Meadows.
Spade Box Corer similar to the one used in the current work.
Thomas Washington Cruise. 1987. Tahiti to Hawaii.
Equipment on the aft deck before abyssal plain sampling. 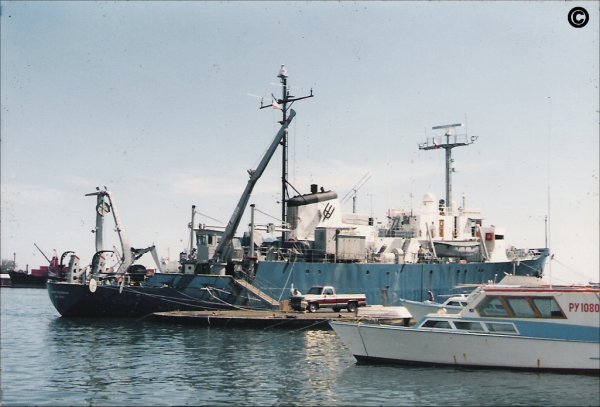