The superficial layers of coastal marine and estuarine sediments within 1 to 2m of the sediment/water interface represent a complex system whose characteristics are determined by the input and output of sedimentary materials, and by biological activity and chemical changes in the sediment and overlying water. Sediment permeability is one of the major factors that plays an important role in controlling these processes. It affects benthic communities of animals, plants and microorganisms in marine and intertidal sediments. We have explored these relationships in experiments using natural and artificial sediments.

Two series of laboratory experiments have been conducted on the effects of detrital material and of photosynthetic and heterotrophic microorganisms on the permeability of natural intertidal sediments from Ardmore Bay, Firth of Clyde and of artificial sediment consisting of a pure quartz sand.In the first experiment, fine detrital material (< 63*m) removed from natural marine sediment was added to natural and artificial sediments. In this experiment permeability's ranged from 0.27 to 0.064 mm.s-1, and the addition of fines decreased permeability by 75% to 77%.

In the second experiment, microbial growth was stimulated over a period of 25 days by enrichment of naturally occurring marine photosynthetic and heterotrophic microorganisms under light and dark regimes. In this experiment permeabilities ranged from 0.25 to 0.49 x 10-4 mm.s-1, and the microbial growth decreased permeabilities by 38% to 99.8%, over the 25 day period. Heterotrophic bacteria had the greatest effect in decreasing the permeability while diatoms and blue green algae were less effective.

Scanning electron microscopy was performed on sediments at the end of both experiments. Microbial activity and growth was measured at the end of the second experiment as follows. Primary productivity was measured by 14C uptake, chlorophyll-a, phaeopigment and bacteriochlorophyll-ab by spectrophotometry, percent total organic matter (TOM) by loss of weight on ignition at 480*C, and heterotrophic bacteria by  viable bacterial counts expressed as colony-forming units. The most significant differences were very high primary productivity and chlorophylls in the sediments incubated in the light,  and high TOM and heterotrophic counts in the sediments incubated in the dark. 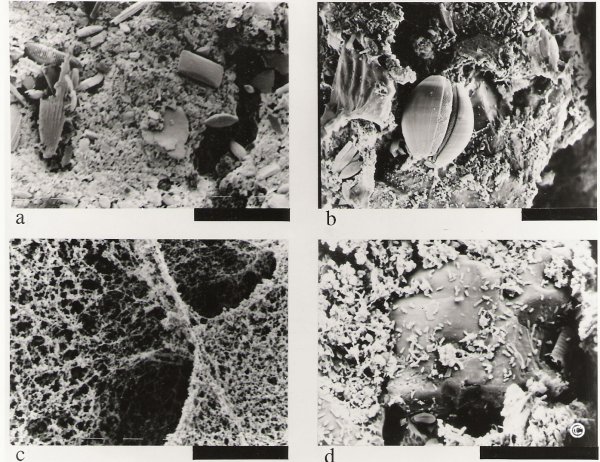 The results are discussed in relation to the permeability of sediments in high and low energy coastal environments such as those in the Firth of Clyde, and in relation to the mechanisms involved in the clogging of pore spaces which lead to reduced permeability. It is concluded that fine detrital material and microbial growth will significantly reduce the permeability of sediments in low energy coastal environments.  This reduction in permeability will have major effects on the redox conditions in surficial sediments - thus influencing the nature of macrobenthic communities of infaunal invertebrates. At a later stage it will have a significant influence on diagenetic processes in the sedimentary column. The mechanisms causing reduced permeability consist of microbial cells physically obstructing the pore spaces and of microbial extracellular polymeric secretions that clog pore throats.

Our results can also be viewed within the broader ecological framework of intertidal environments. This firstly concerns the close relationship between the abundance and activities of sedimentary organisms and the properties of sediments. Secondly, our results are directly relevant to differences between high-energy and low energy sedimentary environments that in turn differentially influence organic levels, microbial abundance, and invertebrate infauna in sediments in these contrasting sedimentary ecosystems.