Scientists may be a step closer towards the development of a vaccine against a virus that is killing scores of Asian elephants, many of them in captivity.

The majestic Asian elephant is listed as an endangered species by the International Union for Conservation of Nature and is threatened by loss of habitat, poaching and illegal trade. There are believed to be around 40-50,000 animals left in the wild.

Zoos around the world are playing a vital role in conservation efforts. However, their work over the last 20 years has been severely hampered by a fatal haemorrhagic disease caused by elephant endotheliotropic herpesviruses (EEHVs).

The disease is usually deadly for young elephants aged between one and four years, and while mainly a concern for captive elephants the virus is also found in wild animals. Anti-viral medications have been used to treat infected animals but their efficacy is unknown. 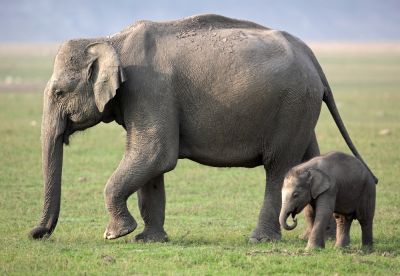 EEHVs were discovered 15 years ago and are known to have killed 80 captive animals but the viruses are difficult to study and none of them have been isolated in the laboratory.

However, now a team of scientists from the University of Glasgow, the Animal Health and Veterinary Laboratories Agency and The Roslin Institute, University of Edinburgh  has deciphered the genetic maps of the two most lethal kinds of EEHV.

The researchers used high-throughput DNA sequencing technology to map the genomes of two viruses and discovered many genes not found in other herpesviruses.

The findings will help scientists improve diagnostic tests and develop vaccines with the aim of helping protect the flagship species from extinction.

Dr Andrew Davison, of the Medical Research Council – University of Glasgow Centre for Virus Research, who led the study, said: “It is vital that we undertake successful conservation activities to prevent the extinction of these wonderful animals.

“However, despite the best efforts of conservationists around the world, attempts at breeding Asian elephants are being threatened by deadly EEHVs over which we have very little power at present.

“This research should bring us closer to improving diagnoses of infected elephants and more importantly help us develop vaccines against the viruses.”

Mr Mick Watson, Director of ARK-Genomics, a Biotechnology and Biological Sciences Research Council (BBSRC) funded national capability at The Roslin Institute, University of Edinburgh where the sequencing was carried out, said: “High throughput DNA sequencing is revolutionising the discovery, detection and analysis of all pathogens.”

Prof Falko Steinbach, Head of the Mammalian Virology Group at the Animal Health and Veterinary Laboratories Agency (AHVLA) said: “This is an excellent example of the power of collaboration between three institutions involved in virus surveillance and research.”

The research is published in the Journal of Virology.