The Antonine Wall Centre will provide members of the public and scholars with information and interpretation on both the Roman period in Scotland and the Antonine Wall, which is currently being considered by UNESCO for World Heritage Site status.

Members of the Hunterian’s Junior Archaeologists’ Club were on hand to guide the Minister through the new high-tech multimedia interpretation resources which are currently being created by the Hunterian Multimedia Unit for use in the Antonine Wall Centre when it opens next year.

“It’s great to hear that the Antonine Wall Centre will have a real focus on improving accessibility and understanding of the Antonine Wall and will encourage more people young and old to visit the site. By using modern technology to tell the story of times gone by, this new centre will be a fascinating source of information.

“The Antonine Wall is a remarkable part of our heritage and I fully support the bid to UNESCO for World Heritage Site status.”

The Centre will provide a showcase for the Hunterian’s world class Roman collections from the Antonine Wall combined with the latest developments in interpretative multimedia displays. Visitors will be guided around the displays by “Verecunda”, a twelve year old Roman slave girl, and the remains of the Antonine Wall sites will be brought to life using 3D technology. 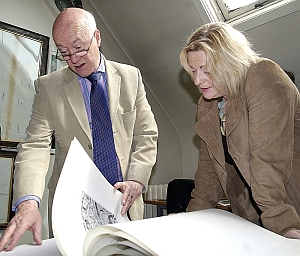 The UNESCO decision on World Heritage Site status for the Antonine Wall is expected in July this year. The Hunterian is currently preparing a bid to the Heritage Lottery Fund, which if successful, will allow for the opening of the proposed Antonine Wall Centre in the summer of 2009.