Boucher and Chardin: Masters of Modern Manners’ is a new exhibition developed by the Hunterian in conjunction with The Wallace Collection, London.

Opening at the Hunterian Art Gallery in September 2008, this beautiful and ground-breaking show focuses on two of the greatest French paintings of the eighteenth century: the iconic ‘Lady Taking Tea’ by Jean-Siméon Chardin and François Boucher’s ‘Woman on a Daybed’. 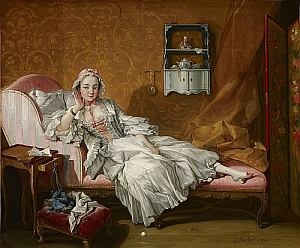 Chardin’s ‘Lady Taking Tea’ comes from the Hunterian collection and was recently voted one of Scotland’s most popular paintings by readers of The Herald newspaper. On display in Britain for the first time in 70 years, Boucher’s ‘Woman on a Daybed’ is on loan from the renowned Frick collection in New York.

Through approximately 30 exhibits which include paintings, drawings, prints and decorative art objects, the background to the two works will be examined from a number of perspectives beyond traditional art history. Both paintings prominently allude to the new interest in eighteenth-century for scenes from everyday life ultimately inspired by the growing taste for Dutch and Flemish cabinet pictures, and to fashions comparatively new to Europe; the drinking of tea and the taste for chinoiserie. 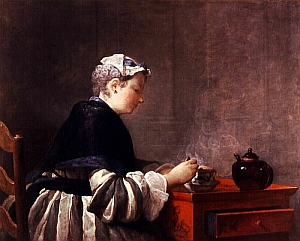 These themes recur in several of Boucher and Chardin’s depictions of women in their private worlds and become the dominant thread weaving through the second part of the exhibition. The inclusion of works by British artists and decorative art objects, some from the Hunterian’s own collection, will provide an opportunity to address underlying social history themes, such as the artists’ attitudes towards the consumption of tea and the contemporary fashion for the Far East in both France and Britain.

‘Boucher and Chardin: Masters of Modern Manners’ will be on display at The Wallace Collection, London, from 12 June until 7 September 2008 and at the Hunterian Art Gallery, University of Glasgow, from 24 September until 13 December 2008.

For further information about The Wallace Collection, visit: www.wallacecollection.org

François Boucher, Woman on a Daybed, 1743.
© The Frick Collection.