A Glasgow student has won a major innovation award for a device that could reduce the damage caused by car bombs.

The N-capsulate device can lessen the impact of car bombs on buildings by acting like a giant airbag. When a building is hit the airbag, which is clipped to the side of the building, will capture shrapnel and absorb shockwaves caused by the explosion. 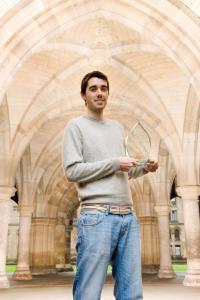 He said: “I developed the idea for N-capsulate as part of my final year project at University. There was a lot of media coverage of terrorism attacks, such as, the incident at Glasgow airport, and I wanted to develop something that could have a practical impact in the prevention of these types of attack.

"During my research I realised there was a huge need for a product that helped prevent the growing problem of car bombings so I focused on that specific area. The product I have developed is extremely relevant to problems now being faced by civilians as well as military personnel.”

The awards, created by the Glasgow Science Centre and supported by lawyers Biggart and Baillie, aim to find the country’s best new invention. Andrew won the student category and received £1,000 and intellectual property support from Biggart and Baillie.

The Product Design Engineering Course is run jointly by the University of Glasgow and the Glasgow School of Art.

For more information please contact Kate Richardson in the Media Relations Office on 0141 330 3683 or email K.Richardson@admin.gla.ac.uk