Why do vultures have bald heads?

The reason why vultures are such strange-looking birds can finally be revealed, thanks to a research team from the University.

For years, experts have assumed that vultures have bald heads and necks to prevent their feathers from being soiled when they tuck into a meal, usually a newly discovered carcass.  That notion has helped fuel the perception of vultures as unsophisticated, blood-thirsty scavengers.

However, new research has proved that vultures may also sport the bare-faced look for a very different reason. They look that way to stay cool. 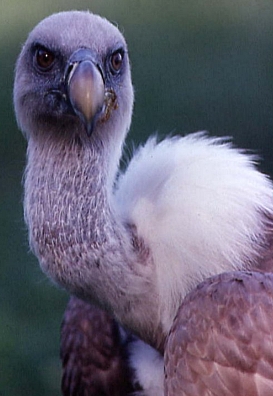 ‘The widely held assumption in zoology that vultures have a bare head and neck to prevent soiling of feathers seems plausible,’ says Dominic McCafferty, Environmental and Evolutionary Biology at the University of Glasgow , a member of the team that has unlocked the vulture’s secrets. ‘But other groups of scavengers, particularly giant petrels,  have feathered heads. Large mammalian scavengers also don't have bald heads, so why vultures?’

Jennifer Ward decided to answer that question as part of her PhD thesis. Along with McCafferty and colleagues David Houston and Graeme Ruxton, all of the University of Glasgow, she investigated the habits of the griffon vulture (Gyps fulvus), a large bird of prey that lives in North Africa, southern Europe and east to India.

Griffon vultures have to withstand probably the greatest daily temperature range of any bird. For example, in the desert of North Africa they must endure summer ground temperatures that routinely reach over 40oC. However, within minutes of taking off, a griffon vulture can reach an altitude of over 2,000 metres, where temperatures can fall below freezing. ‘The birds must have physiological and anatomical mechanisms to cope,’ says McCafferty.

To find out how they do cope, the team examined photos of wild birds, and observed captive birds, to see which postures they adopted in different conditions. They modelled how heat would be lost from different parts of the birds’ bodies when in each posture, using measurements taken from both captive birds and museum specimens.

When it was cold, the vultures clearly hunched their bodies, tucking their heads in, and reducing the surface area through which they could lose heat. When it was hot, the birds stretched their necks out and opened their wings in order to dump as much heat as possible, the team report in the Journal of Thermal Biology. That in itself was not surprising, says McCafferty. ‘However, we were surprised to find out how important posture and bald skin areas are.’

By changing their posture to expose more or less of the bare skin on their heads and necks, vultures could cut their heat loss by half in cold conditions and increase their heat loss by almost a quarter in certain hot conditions. ‘That's a really valuable energy saving for a scavenging bird that may spend many days without food,’ says McCafferty.

Most other species of vultures, such as the American king vulture, sport bald heads and necks for the same reason, adds Houston, while other birds, such as emus, ostriches and cassowaries, that have either bald heads, or large areas of bare skin such as wattles,  may also use them as 'thermal windows' that help control heat loss. ‘There may be more than one selective advantage in evolving bald heads,’ says McCafferty.

See Matt Walker's article in full at the BBC's Love Earth website.
And read the academic study published in Journal of Thermal Biology.